After last night's debacle at the hotel in Koblenz you'll be pleased to know that I've booked us in to Le Jean-Sebastien Bach in Strasbourg for the next couple of nights. We should be there for lunch. Or would have been if all the trains weren't running up to half an hour late, the connections disconnected and the wheels hadn't fallen off the Vorsprung durch Technik in general. The hotel's a bit swish though; we've even got a trouser press. A freshen up and a walk in the park before dinner is in order I think.

I think that we could recommend Le Parc de l'Orangerie for an evening stroll if only for the magnificent White Storks (Ciconia ciconia) nesting in the carefully pollarded Plane trees. Did you know that these birds gave rise to the ancient Greek Law of Pelargonia, (Pelargos being the Greek for Stork)? Storks were thought to care for their aged parents and Pelargonia enshrined in law that Greek citizens should do the same. Storks don't, by the way, but the majority of Greeks still do. 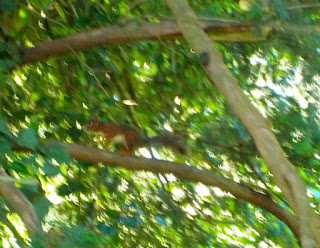 Apart from the storks they have a wonderful selection of well labelled trees here and what is more, they have Red Squirrels (Sciurus vulgaris) running around in them (a bit too quickly for my little camera). These are still quite rare in England due to the introduction of the Eastern Grey Squirrel in the last century coupled with the virtual eradication of its natural predator, the Pine Marten. However, conservation measures are under way for both the Red Squirrel and the Pine Marten. 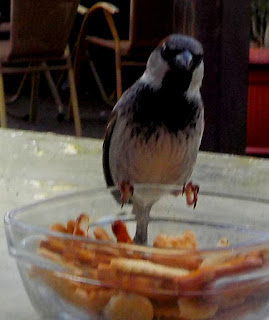 Time for an aperitif before dinner (I spotted a nice looking restaurant near the park entrance) and there's a small cafe overlooking the lake here which has a Pastis with my name on it. It looks as if we have company. I have a great fondness for sparrows as they are different wherever you go. This is a House Sparrow (Passer domesticus), the same species as we have in the UK but when we get to Italy next week we'll be accompanied by Italian Sparrows (Passer italiae) possibly meeting up with some hybrids on the Swiss-Italian border. When we get back to Crete we'll be with an intergrade species; part Italian, part Spanish (Passer hispaniolensis). 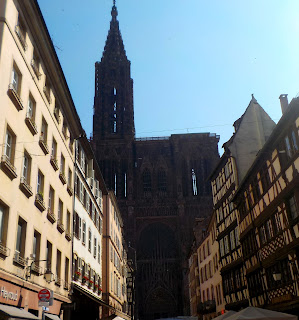 A relaxing day with no travelling. I want to search out the Zoological Museum later but first, a walk by L'ill (the river that flows through Strasbourg as opposed to The Rhine which runs alongside) down into the old town, and it is old, it held its 2000th anniversary in 1988. I particularly want to see La Cathederale de Strasbourg to see what inspired Thys van Leer to dedicate a piece of music to it. This is a comparitively modern building, it wasn't completed until 1439. It was actually started in 1176 but you know what building projects are like when you've got a multitude of materials suppliers to deal with. 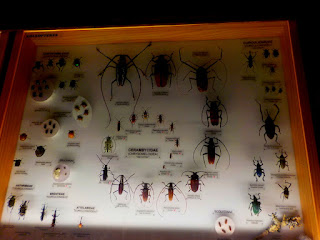 And so to the Musee Zoologique which is not the best signposted Museum in the world, being buried in a mass of old buildings of identical construction in the academic quarter. Found it at last and it was worth rooting out (and you must admit that the psychology seminar we attended was interesting and the guy from the geology department was positively fascinating). A real old fashioned museum, full of stuffed animals and well layed out display cases full of insects and other arthropods. No, you go on ahead. I may be some time. Ah, Chrysomelidae...

Steve's Books (well, just the one at the moment but 'The Quick Guide to Creepy-Crawlies' is now at the proofreading stage and on course for publication next month). 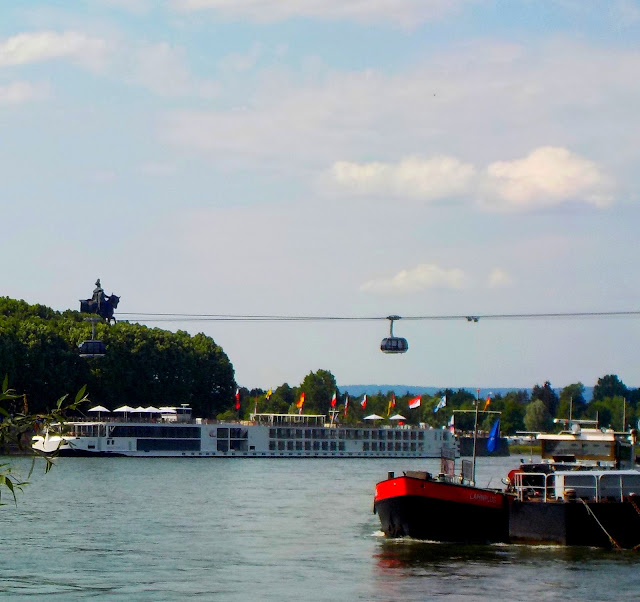 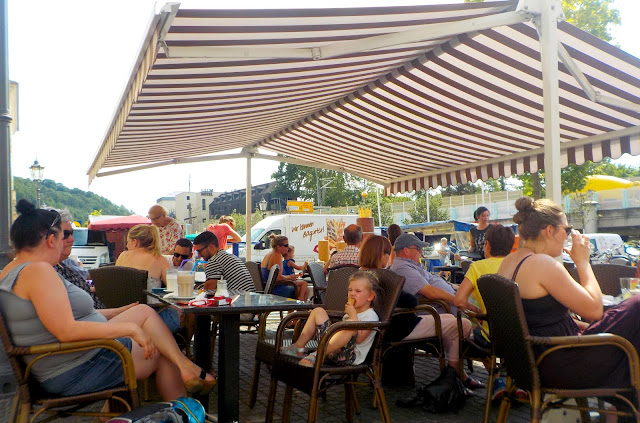 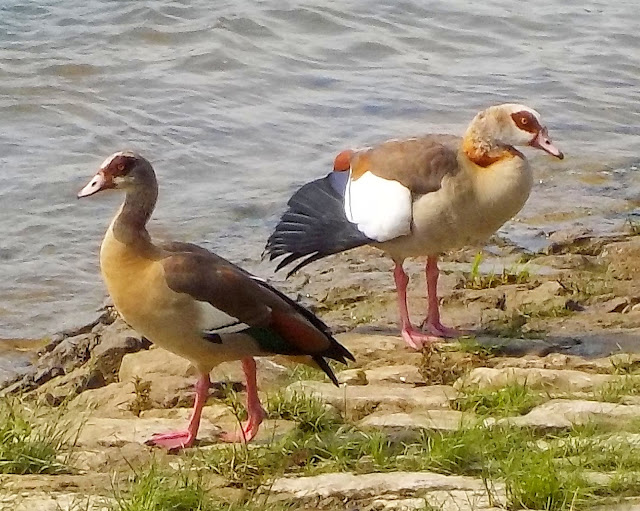 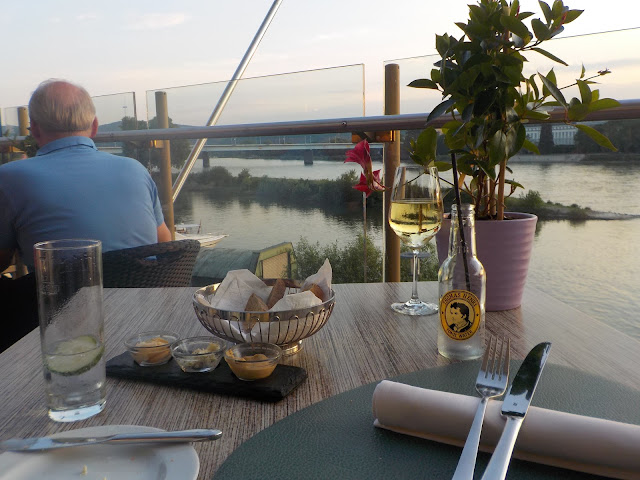 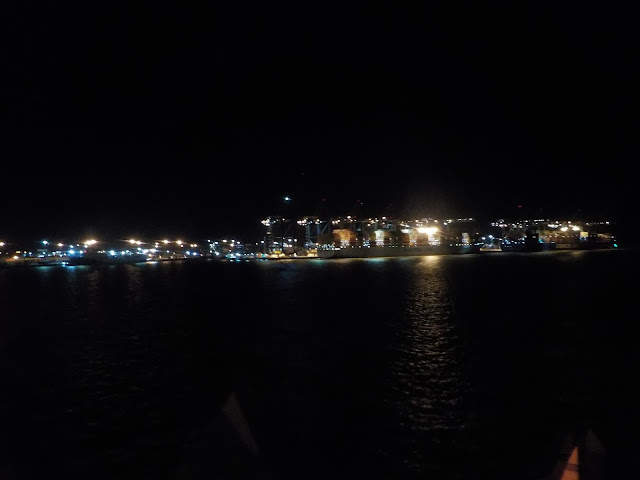 Everything packed? Passports to hand? Then let's go. First stage is a bus to Penrith, taking a last look at The Lakes along the way and then a train to Manchester. You'll be pleased to know that we are travelling First Class using an Interrail pass 1.

That's Manchester out of the way and so it's across the Pennines and maybe a last chance to see stations like Carnforth, with its white picket fence, before the Trans-Pennine Express gets built. Change at Doncaster and then down the east side of England to Peterborough where we'll get out and stretch our legs for an hour or two. A complimentary light lucheon and a glass of something to wash it down with will be served on board the train. Don't you just love first class travel? 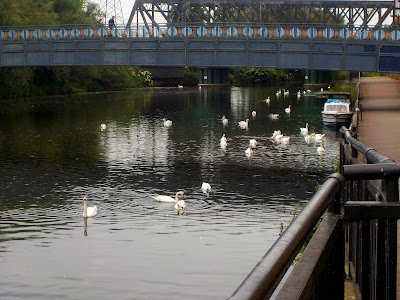 We have about two and a quarter hours here and there's a wildlife haven about twenty minutes walk away. They also have a model railway there and I'm a sucker for those. Quite nicely laid out foot and cycle paths here in Peterborough which are keeping us nicely away from the traffic. A healthy flock of Mute Swans (Cygnus olor) spuddling about on the River Nene. Quick way to recognise a Mute Swan; they're the ones with a black knob at the base of their beaks. The wildlife haven is just across that footbridge there. 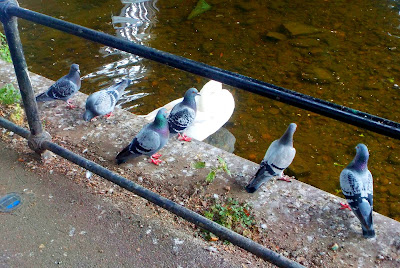 OK, so the wildlife haven has a padlock on the gate, it's coming on to rain and we have to lug our suitcases back to the station. Never mind, we'll take a stroll along the banks of the Nene and see what we can find. I don't think that the rain will come to much. I see that the Feral Pigeon (Columbia livia domestica) still holds sway here, I haven't seen one Collared Dove (Streptopelia decaocto) in the town. As you may know, the latter went on a great colonization drive in the 20th century and are pushing feral pigeons out of town centres in Asia, Europe and North America. Oh look, there's a rat scurrying for cover. Yes, I had noticed that the rain is now coming down rather heavily. 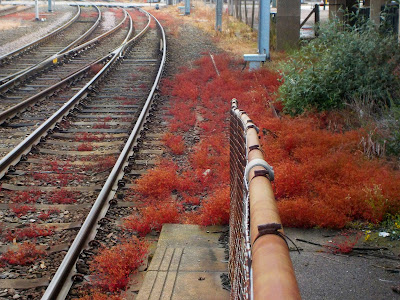 There's nothing like gently steaming through East Anglia on a fine day. I only wish that it were a fine day and that the train was gently steaming rather than us. A sort of wet drabness is pervading the flat landscape. Did you notice the name of that last station we passed through? Wrabness. Says it all really. Taking the earlier train out of Peterborough means we'll have an hour or so to kill at Harwich before we can board but maybe it won't be raining there.


That's the boarding passes sorted and it's stopped raining so lets go and find somewhere quiet to sit until we can board. Not the most salubrious of places but you can be a naturalist anywhere. Do you remember the red weed from War of the Worlds2? It seems to have invaded Harwich. On closer inspection however it appears to be some species of Geranium. Shame, I rather liked the idea of it coming from Mars. 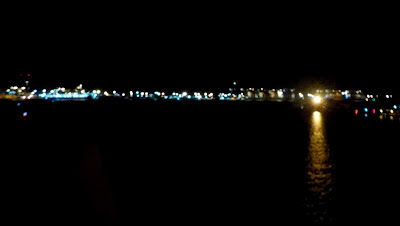 That's better, a hot shower, a change of clothes, a fine meal in the Metropolitan Restaurant and they even have a smoking lounge. Midnight on the River Stour looking across to Shotley Gate. The last time I was here was in 1974 doing my basic training at H.M.S. Ganges. It seems like a different lifetime now. Enough nostalgic musing, tomorrow is another day and I want a decent breakfast before we disembark at the Hook of Holland at eight a.m. So, time for bed. Goodnight.