Here we are again, happy as can be and ready to explore the Eden valley beyond the bounds of civilisation. Crossing the little stone aqueduct once more and I see that we have some water in our stream bed at last. Let’s see if we can delve in and find anyone at home. Not exactly humming with life, I don’t suppose that it’s had time to get established yet, but here’s one curious little creature. It’s only a couple of millimetres long and we can’t get a very good resolution picture of it with the equipment at hand but we may be able to tell something about it. It’s obviously aquatic, or leastways semi-aquatic and six legged (I think I can just make out the forelegs under the head) and he has rather large eyes and long jointed antennae. Given all of that and his general shape I would hazard a guess that he’s a Water Treader. They’re scavengers that you can often find on plant matter in still-ish fresh water or generally moist habitats and he certainly won’t be happy when the rains come but I dare say he’ll find some quiet backwater in which to continue his existence.

This is getting rather dense along here and I didn’t bring machetes so I think we’d better try our luck further up the bank through those pines up there. Although it is somewhat dark and gloomy down here in the depths it is certainly a treat for the ears with the soft gurgle of the stream tumbling over rocks, various bird calls and there’s a Robin singing his heart out up there which has been following us for the last half mile or so.  Now this is a little odd, it looks to be a broken blackbird’s egg. The eggs tend to be paler and bluer than their more northerly counterparts but even so, this one looks rather washed out. Could be that it’s been lying here undisturbed since April or May when the local blackbirds usually breed although I believe that even the more northerly birds continue breeding until July. They may breed even later this far south of course but I’d have thought that November was stretching it a bit. 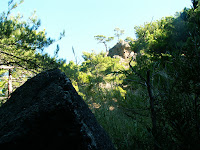 It looks as though we’ll have to cross the stream again at this point as the vegetation is getting insufferably dense. In fact I don’t think we’re going to get much further down here. Let’s see if we can scramble up out of the depths and find a track. It doesn’t seem like much of a climb to the top.

That was more of a climb than I thought and two things are self evident. Firstly, there is no track and secondly, this is not the ridge. The real ridge was hidden from us by the slope of the hill and is as far above us as the valley is below. Ah well, onwards and upwards – at least the gradient isn’t so steep. 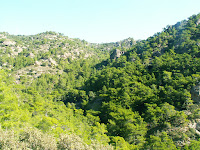 Now this really isn’t playing the game. Another false ridge and still no sign of a track. At this point I’d settle for one heading back to the road. Remember those old geography lessons at school where we were told that valleys were either V shaped or U shaped depending upon whether they were made by water or ice? I don’t remember being told about seagull winged shaped valleys with ever receding horizons. There’s nothing for it, we’ll just have to keep going. There are a few hundred feet below us and a few hundred feet above us. Ah well, nice morning for it, gird your loins and up we go again.

Only another hundred feet to go… unless this is a further bit of trick topography and there’s yet another ridge beyond. I think we’ll just rest here awhile in the shade of these pines as the sun is beginning to beat down upon us with a bit more intensity than is strictly necessary in November. Oh look, a Small Copper butterfly seems to be enjoying it, I don’t think that we’ve met one of these on our travels so far. These are from the same family as the blues that we were discussing up on the Katharo Plain a few weeks back. I mentioned then that not all of the blues (as the Lycaenidae family used to be known) were blue. Well this is one of the brown ones. The family is now known as the Gossamer Winged Butterflies but even that, I feel, is stretching the description of gossamer a little bit. Wee Bitty Flitty Butterflies might me more apt. Come on then – up we go again.


Told you there would be a track didn’t I? Wasn’t that climb worth it for such a wonderful view of the valley so far? Don’t look at me like that – it was only a two hour climb and there’s a lovely mushroom growing by the side of the track that we can take back to identify; potentially deadly by the look of those white gills. Where’s the car? You see that little speck down there by the roadside… There’s one other little thing I think that I ought to mention – I know this track and it doesn’t lead back to the village. That is, not the village where we’ve parked the car but it does lead back to our base camp at Ferma so we can pop home, have a spot of lunch and pick up the car later. How far? About eight kilometres.

Now, now, don’t be silly. Put that rock down!

I am indebted to my neighbour Maria who came looking for me after I’d been gone for five and a half hours on a three hour walk and picked me up 200 metres from my front gate and also to Sam in the next village who came over in the afternoon and drove me back to Agia Fotia to pick up the car. Thank you both very much.