Kibbling? What on earth is that?

a) The brother or sister of a goat.

b) Separating the seeds from a carob pod.

c) The act of kissing and nibbling as practised in the courting rituals of many animal species (including us). 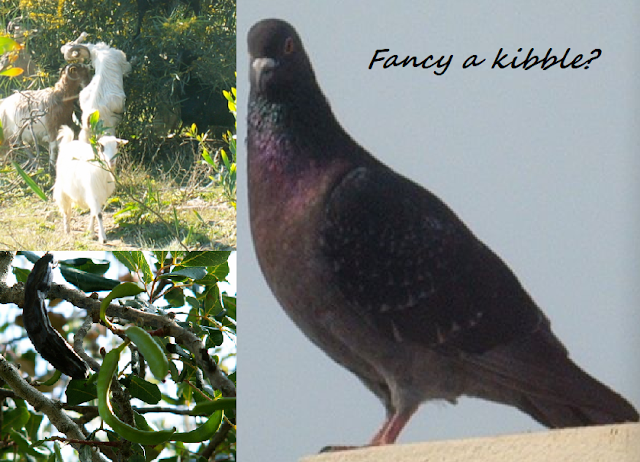 Much as I would like it to be either a) or c) the answer is the rather more mundane b). It's carob picking season here in Crete and when the harvest has been gathered in there will be an awful lot of kibbling going on around the villages. Why not tag along with us as we tour the upland villages of east Crete amid the autumn flowers and wonderful wildlife in Series 6 of the #CreteNature blog?
at September 30, 2017 1 comment:

To The Village of Schinokapsala 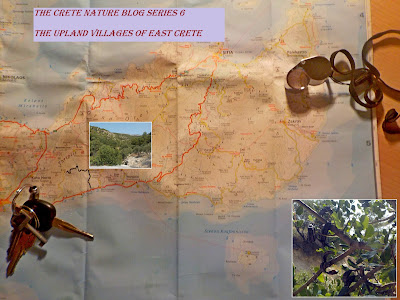 Welcome back! In the last three series we've trekked up hill and down dale and frolicked with the fishes in the Libyan Sea. And now for something completely different...a tour of the upland villages of eastern Crete taking in the beautiful scenery and amazing wildlife along the way. So hop in alongside me and we'll pootle along the coast from our base in Ferma, take a left in the village of Galini and head up into the hills. This road meanders along the edge of the Eden Valley and in places the outcrops of rock hang suspended above the road in a most unnerving way. If we bear right here, through the olive groves, we'll make a stop in the Aschlia valley. I see that the carob picking season has begun so lets halt under this carob tree at the side of the road and sit upon the wall awhile. 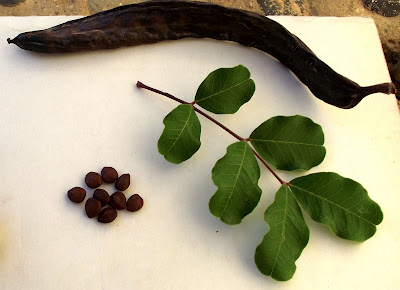 Carob harvesting involves hitting the tree with a stick to knock the pods down whilst trying not to damage the delicate flowers which appear at the same time. When you've picked them all up, you dry them in the sun and then you're ready for a spot of kibbling. This is the process of separating the seeds from the pods (the broken bits of dried pod are the kibbles). Then you take the seeds, roast and peel them. The naked kernels (embryos), peel (endosperm) and kibbles are all used. The embryos make a gluten free, protein rich flour; the endosperm is used to make a gum that, amongst other things, puts the jelly into cat and dog food and the kibbles make a caffeine free chocolate substitute. Useful plant the carob. 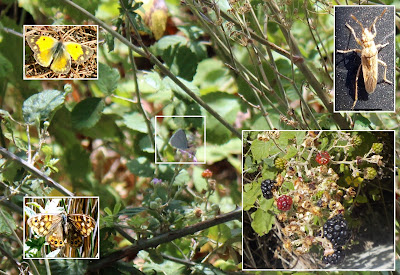 Talking of harvesting it looks as though the blackberries are beginning to ripen and the butterflies are taking full advantage. There's a Clouded Yellow darting about, one of the blues just settling and a Speckled Wood patrolling up and down. Another Speckled Wood has just joined the company and the two of them are haring around the bushes, us and the car. I think that our guy is chasing off a pretender to his throne. Meanwhile, on the car, we have a Seed Bug that I haven't encountered before. An all white car and he's chosen to land on the black trim between the windows. Insects are cold blooded of course and black absorbs the heat so maybe he's been foraging about in the shade and has taken this opportunity for a warm up. And harvesting of a different sort seems to be taking place on the wall behind you, just look at that crowd of Lepisiota ants swarming over that dead mantis. Yes, you're probably wise to get up – I've warned you about wearing shorts before on these trips. Where would we be without these ladies though? They're the undertakers of the insect world. All ants are eusocial which means they are born to perform different tasks, they have more than one generation in the colony and they cooperate in caring for their young. Not totally dissimilar to ourselves really which may explain why both ants and ourselves are such highly successful animals. Some may say too successful (in both cases). 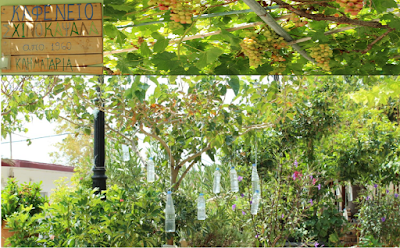 And at this point I suggest that we do a little harvesting of our own. Just a little way up the road is the village of Charred Oak, or Schinokapsala as the locals insist on spraying it, where Nikki keeps a kafenion with a magnificent old grapevine which should be laden with fruit about now. Ouzo and a bunch of grapes on a shady terrace overlooking the sea; what could make a better end to the first leg of our journey?

Have you ever wondered why bottles are hung in trees like that? Insect traps maybe – but there's no way for the insects to get in. Bird scarers? - there's no fruit to protect. The answer is much simpler – they are weights. Trees have a tendency to grow upwards so if you want a tree to have shade giving branches at a convenient height you weigh them down as they are growing. Simple but effective. 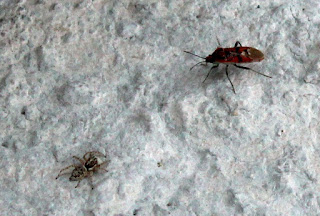 There's a lovely bit of action going on down here on the floor; we've got a seed bug and a jumping spider on a collision course and they haven't seen each other yet. Now they have. The spider stops..adjusts...and pounces. And almost in the same movement.. jumps back again. I thought he was being a bit optimistic although I've seen them take on flies bigger than themselves. Perhaps it was the warning colouration.