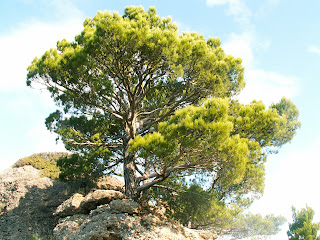 And so the seasons progress: as the northern hemisphere battles the cold and rain the southern braces itself and prepares for the fires of summer. Here in south east Crete we have it milder than most, the snow has started to fall on the Dhikti mountains to the west of us but has yet to reach the Thriptis at the head of our valley. There is a special place that I want to take you to today and a special reason for doing so. Hop in the car and we’ll make a start. Here it is, where this glorious pine stands sentinel to mark our path. 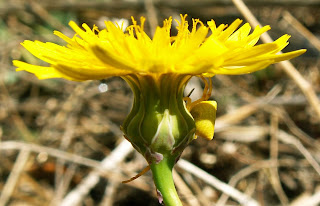 Quick, look! Ahh, you just missed it: A moment before a hoverfly was happily pollinating this yellow composite flower, totally unaware of the perfectly camouflaged crab spider lying in wait. You can just see his abnormally angular abdomen disappearing around the involucre of the flower and the black spike above, protruding between his left legs, is the hoverfly’s wings. The action was over in a flash and the fly didn’t feel a thing. Hmm? Insects don’t feel you say? Don’t they? 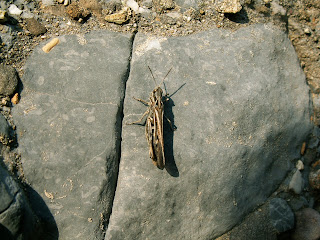 It seems to be our day for just missing things; a lizard just scurried into that clump of thyme. I didn’t see him until he moved. I’m not surprised to find him here though as the area is positively alive with grasshoppers. Just pass that one to me would you and I’ll show you something. Not so easy to catch bare-handed are they? He saw you and jumped. The lizard saw me and scurried. If the hoverfly had noticed the spider it would have flown. Put yourself into the mind of the grasshopper for a second. A huge shadow looms over you, danger is imminent, your brain releases chemicals that flood your body with immediate energy, you jump. Danger averted. Two questions: one, how did you feel?

Sorry about that. The scorpion didn’t physically exist but the reality was there in your mind and it didn’t take much to recreate that flood of chemicals, common to all animals, that precedes the ‘fight or flight’ response. Momentarily you felt fear. Don’t look at me like that, it was just a little illustration. It was not the danger itself that caused the chemical flood (that would have been too late) – it was the anticipation of danger. So insects can’t feel? That depends upon your definition of emotion I suppose. 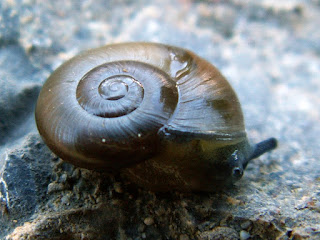 The second question is why bother to move at all? Take this lovely little snail for example. It can’t jump, scurry or fly away but if you approach too closely it will draw in its horns and hide in its shell for protection. Protection against what? It has no conception of life and death any more than the grasshopper, the lizard, the spider or the fly. Why don’t prey animals just allow themselves to be eaten? Plants, you may argue, just allow themselves to be eaten, but even they have defensive mechanisms as we’ve previously discussed on our travels. Life begets life and I believe that there is a complex network of little understood emotions at work that ensures that enough of a species reach maturity and reproduce to ensure that this is so. And this, by definition, must happen at all levels of life. 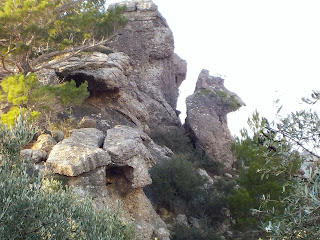 We’re on more solid ground here, literally. At least we know that rocks don’t have emotions even if they do sometimes have an eerie ability to present themselves as mythological creatures like this stack here. We can draw a strict line between what is living and what is not. You just know that I’m about to say something that throws that statement into doubt don’t you? Ah, my friend, you are getting to know me too well. Some of these little chips of rock are translucent and let through light as you can see. One such rock is called Aragonite, a very common form of calcium carbonate, formed originally from the shells of long dead molluscs. It has recently been discovered1 that chitons (those ancient sea creatures we were looking for back in February last year – see Rodin, The Scallop and The Crab ) can ‘see’ using their aragonite eyes. The tiny chips of aragonite embedded in their shells, which were thought merely to indicate the presence or absence of light to the animal, are linked to the brain to produce diffuse images. Just enough to recognise a predator (feel fear?) and clamp itself to the rock upon which it is walking. From live marine mollusc - to dead mollusc shell - to rock mineral – to chiton eyes – to predator recognition – to emotional response. We seem to have come full circle and the interconnected web of life reveals more wonders daily. Here, take the keys and drive the car back to base would you? I’d like to spend a little time on my own now. I think I’ll just climb up there and contemplate the wonders of the universe for a bit. I may not be back for a while but don’t worry, I’m sure we’ll meet up again sometime. I dislike emotional farewells so I’ll just say that it’s been great fun travelling with you and thank you for being my companion over the past couple of years.