Descent Into The Milonas Valley

Now that we’ve made it all the way up here we’ve got to get all the way back again but this time we’ll come down the Milonas (or Miller’s) Valley. So first we must descend that evil looking slope .

A quick look at the flowers before we start our descent, most of which we met on the way up, such as the little yellow Sternbergia but there are also these delicate little Autumn Crocuses. Pretty little things that those of you with long memories may remember we met once before when we visited The Waterfall of Milonas a couple of years back and I told you the story of a famous murderer. On the plus side though, it was the original source of the drug colchicine which has a number of uses including treatment of Familial Mediterranean Fever. This is a rather nasty human disease caused by a genetic mutation specific to people of Eastern Mediterranean origin.  Like nettles and dock leaves the problem and solution are to be found in the same place.

I see that our friends the ravens are keeping an eye on us from above. One of these days I’ll get a decent photograph but it’s difficult to hold the camera steady whilst spinning on a scree slope as you may have noticed. You may be forgiven for thinking that a raven is a raven is a raven but apparently not so. According to an analysis of  DNA taken from 72 birds across the northern hemisphere they are all the same apart from those in California which are genetically different.[1]  (I can’t help feeling that this may explain a lot about Californians in general). Incidentally I’ve seen a lot more ravens about this year and at lower altitudes. I wonder why?

Watch your step coming down here, it really is quite treacherous underfoot. I usually find that using the plants as stepping stones rather than trying to step between them gives you a better purchase. I see we have a couple of seed bugs down here, one adult and one nymph. Both the same species as far as I can see; Pistachio Red Bugs. A bit of a misnomer really as they’ll sup sap from a multitude of plants. They’re very hardy little bugs, as happy up in the mountains as they are down on the coast, so you can’t help admiring them.  Talking of the coast, you can just about see it from here (the sea at any rate).

We’re aiming for that track below us but first, a fallen pine tree to investigate. Let’s sit down here a while and poke about among the decaying branches and see who’s home. What have you got there? A smashing little Darkling Beetle, no bigger than my thumbnail.  These are cosmopolitan beetles that you can find from the driest deserts to the wettest rainforests and are omnivores, like ourselves. If you want to live all over the world then it pays not to be too fussy. If you look closely you can see that this one has a blueish sheen and that, along with the pattern of dimples on his back helps us to identify him. He goes under the name of Raiboscelis coelestinus if you’re taking notes. 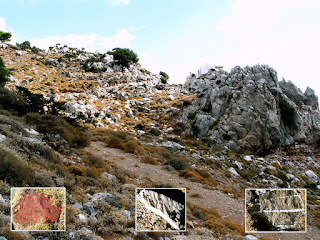 And here we are back on the track that leads to the church. Next week we’ll see what’s lurking in that gully but first – let’s rock. A couple of weeks ago we were looking at minerals and now I’d like to draw your attention to some of the rocks that are lying around, of which I’ve collected a few on the way down. So what’s the difference between a rock and a mineral? To illustrate: the church is sat upon a limestone outcrop. Limestone is a rock which consists primarily of two minerals: calcite and aragonite. Both of these minerals contain the same elements: calcium, carbon and oxygen but they’re put together in a different way. Simply, elements make minerals make rocks. We too are a collection of elements put together in different ways which we get, via plants and other animals, from rocks. So on our way down the Milonas valley we’ll have a little look at the chemistry of life as we go and see how we’re all bound together with the planet on which we live.

The first Black Redstarts of the autumn have arrived on the south east coast. I spotted this female on the way up and there was a male on my gate post as I left home this morning. These birds usually appear in November and overwinter here. They form a part of our ongoing phenological study (see Phenomenal Phenology).

[1] California Ravens are a Breed Apart