A Kingdom in the Pine Woods


We are all familiar with the animal kingdom and the plant kingdom but this week, we’re going down into the woods to look at a third kingdom, the kingdom of fungi. But before we go just take a moment to breath in the damp smell of the pine and listen to the silence. We’ve had rain over the last few days and the rich smell of the earth comes up to meet us.

Eyes down and onwards, it shouldn't be long before we find some.

Here we have something that is easy to identify. It’s a mushroom. Or is it a toadstool? Well, scientifically speaking there is no difference between the two.  We tend to use these terms in a practical sense to differentiate between those that are edible and those that are poisonous. Most of them are neither. This is an edible Wood Mushroom (to give it its common name) and there growing beside it is a Romulea. This may be no coincidence, the majority of plants are thought to have a mutually beneficial relationship with fungi.

Over here we have some heather and though you can’t see it, it too has fungi wrapped around its roots. Plants, like animals, need food and water to survive and they get their food from the nutrients in the soil. But in pine woods the needles of the trees drop to the ground and this makes the soil very acid and nutritionally very poor. This is a very good reason for the fungi and plant kingdoms to work together. The fungi,  who’s roots (called mycelia) are much longer and thinner, can absorb far more water and nutrients than the plant. The plant has green leaves which absorb energy from sunlight and can make sugars such as glucose (photosynthesis).

So the fungus mines the raw materials, the plants manufacture the finished product and they share these to their mutual benefit. (Much as we do but without money changing hands which seems to me to be a better system).

Let’s trundle on down a bit further and see what else we can find.  Ah, a fallen tree branch showing signs of decay. You know me by now, I can never resist turning over a log. A quick pull on this side branch and…crack!! That was somewhat more decayed than it first appeared (says he rising from the floor). Let’s take a look inside. We’ll just carefully remove this crumbling bark. A scorpion! That’s the first one I’ve seen on the island in almost ten years. Pity it was too quick for the camera. A rotting log is an ecosystem in its own right. Here we can see a blue green fungus breaking down the structure of the tree. Together with bacteria (part of another kingdom called the Monera), fungi are the recyclers par excellence.

Feeding inside are a myriad of microscopic creatures, insects for the most part, and feeding on them are bigger insects and arachnids such as the scorpion and this Jumping spider of the family Salticidae. It's fascinating to watch these guys hunting. First they turn their head and lock onto the target visually, then they swivel their back end round until they're perfectly lined up for the strike. They then stalk slowly forward assessing the target and when the target is confirmed they drop a line of thread and pounce, the thread unreeling behind them. One quick venomous bite and its back up the securing line for a good feast. 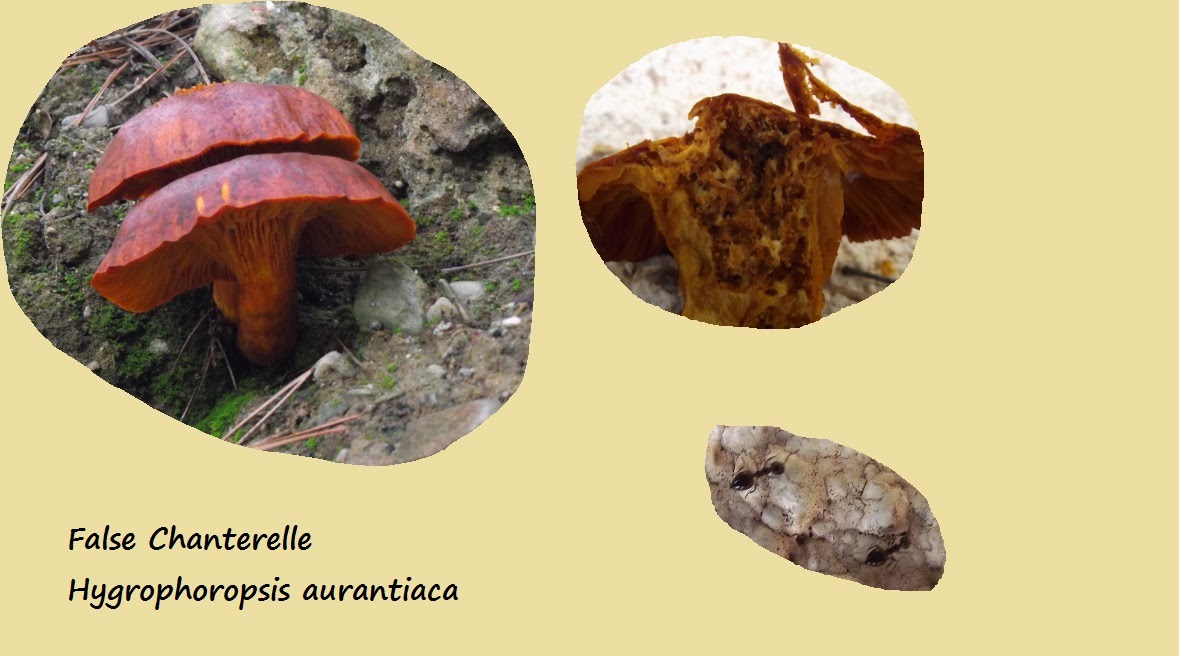 Now we’re down into the very depths of the gully and though the stream isn’t exactly flowing it is very damp down here and growing on the roots of this lentisc bush I see we have some False Chanterelles. We’ve already seen how fungi help plants to grow and also act as their undertakers but they also provide food and shelter for insects such as these ants and the Springtails we saw under the microscope a couple of weeks ago.

We’ll make our way back up the hill now as there are a couple of other things that I spotted on the way down which will round off our little fungus foray.


Take a look at this greenish yellow stuff growing on these rocks here. This is a lichen. These are fascinating organisms as they are made up of a fungus and either green algae (part of the plant kingdom) or a type of bacteria called cyanobacteria which is capable of photosynthesis. Sometimes it’s even both but usually it’s green algae. The funny thing is, if you separate them out in the lab, that is to say isolate them in a culture, they behave totally differently to when they’re together. There are several types which are informally grouped according to the way they grow. This one, which seems to form a crust over the rock, is a type conveniently called a Crustose Lichen.

And finally… we wouldn’t be true naturalists if we didn’t look at a bit of pooh once in a while but there can be beauty even here. These little golden fairy cups are from another branch of the Kingdom called the Ascomycota. I said earlier that fungi were the recyclers par excellence and here they are busily breaking down animal waste, returning the trapped nutrients to the soil to be used by other fungi and plants. And so the endless cycle continues from life to death to decay and back again and that is just one small part of the wonderful kingdom of Fungi.

We haven’t had time to touch on other members of the kingdom such as yeasts and moulds but as always there’s plenty more on our facebook page: Steve's Naturalists Group


Until next week – good hunting.