We’re off to Heraklion again this week folks but rather than revisit the Electric Wetlands I thought we’d stop off before we reach the big city and have a look at what’s about on the eastern side of the metropolis. So, with the inevitable sandwiches and orange juice to hand let’s take a look down this side road marked Karteros and see what we can find. Now I was not expecting this; a bucolic scene straight from my childhood with rectangular hay bales and broad unmown field edges bursting with life. Crete, as ever, is full of surprises. When we were young we used to make castles with secret entrances out of bales like this. I don’t think the farmer minded – after all his bales all finished up in one place so we were unpaid labour in a way. The other great joy of course was the field-side safaris; intrepid hunters in search of monstrous pythons (well grass snakes anyway). So let us don our pith helmets once more and go and explore the jungle.

Our first find. Flitting around at the base of the tall grasses are these Grass Skippers. It’s not surprising to find them here as their larvae feed on grasses and sedges. There are a couple of things that distinguish them from other butterflies. Firstly the tips of their antennae bend backwards like little crochet hooks and secondly they have a peculiar way of folding their wings when they come to rest (which isn’t often). That’s why they’re called Skippers – they restlessly skip from plant to plant.

Ah, a nice flat stone to flip. I wonder if anyone’s at home? An Ocellated Skink. These are quite common across the island and as you may recall we’ve met them before (see The Road to Nowhere) so we’ll let him go about his business.

On the other hand this Corn Marigold is playing unwilling host to some creatures that we haven’t met yet, Red Spider Mites. These are short lived arachnids, related to spiders, scorpions, centipedes and millipedes. Their whole life cycle from egg to adult is only about three weeks but they hatch in such great numbers that they can totally defoliate a crop in those three weeks and as such can be quite an agricultural pest.

There are a few more on the leaves of this rather striking flower nestling amongst the Wall Barley.

I’ve not come across this particular specimen down in the south east. It’s a Silver-leaved Nightshade. Like other Nightshades, its berries are poisonous and contain chemicals that can cause birth defects such as five legged cows and so on. Not totally without its uses however. After we’ve played about with it for a bit it finishes up in contraceptive pills and anything that slows the suicidal rate of expansion of the human race can’t be all bad.

I don’t know if you’ve noticed but up at this end of the field, near the buildings, we have two closely related birds flying about – Feral Pigeons and Collared Doves.  When I was a young boy in the 1960s  I don’t recall seeing a Collared Dove in England although they had started arriving, having spread from the Indian sub-continent the decade before. In the 1970s  some fool thought that they’d make a nice addition to the fauna of the Bahamas from whence in the 1980s they took wing to Florida without even waiting for a Green Card. Nowadays they can be found from Alaska to Southern Mexico in the Americas and right up into the Arctic Circle in Europe. Here in Crete they were listed as a ‘rare resident restricted to Rethymno until 1989’ by Coghlan in A Birdwatching  Guide to Crete (2001) with a further note regarding its spread along the north coast in 1990 and first appearance in the south west at Frangokastello. 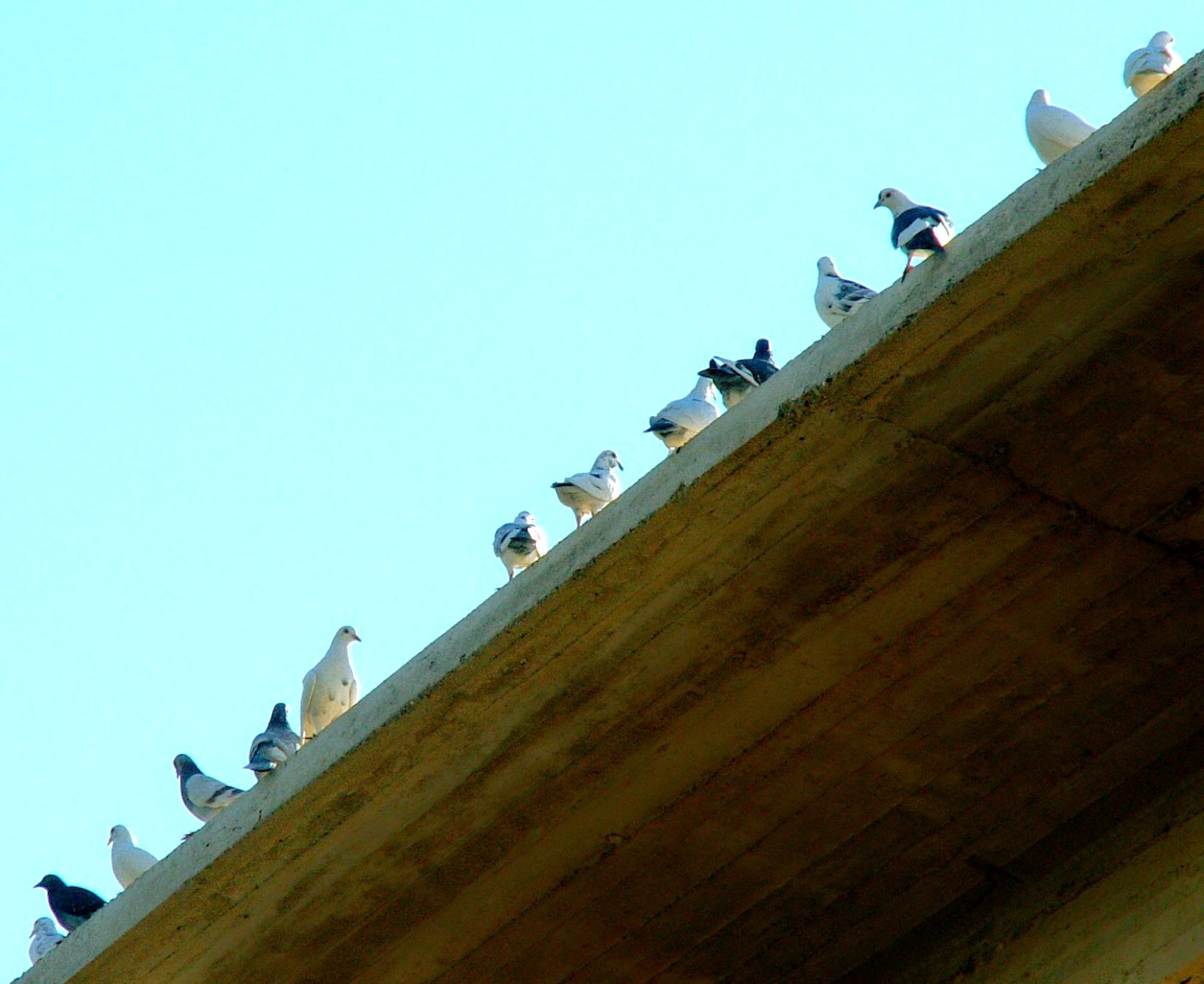 The Collared Dove is a bit smarter and more street-wise than the dear old bumbling Feral Pigeon and is tending to displace him around the world. I’ve been keeping a count of both species in Ferma over the past four years where we used to have a regular flock of 17-18 Feral Pigeons and one pair of Collared Doves. Last year the flock was down to 14 and we had two pairs of Collared Doves.  We must count again when we get back.

And now it’s time to sit on a hay bale and partake of the coffee and sandwiches. This does take me back you know….

Nostalgia Bit for British over-50s
Jamboree bags, pink and white sugar mice, singing along with Freddy and the Dreamers on the tranny, marbles, putting jumpers down for goalposts and spending more time arguing whether the ball was in or out rather than actually playing football, reading the mottoes on Love Hearts… any others?

Until next week then, happy hunting.