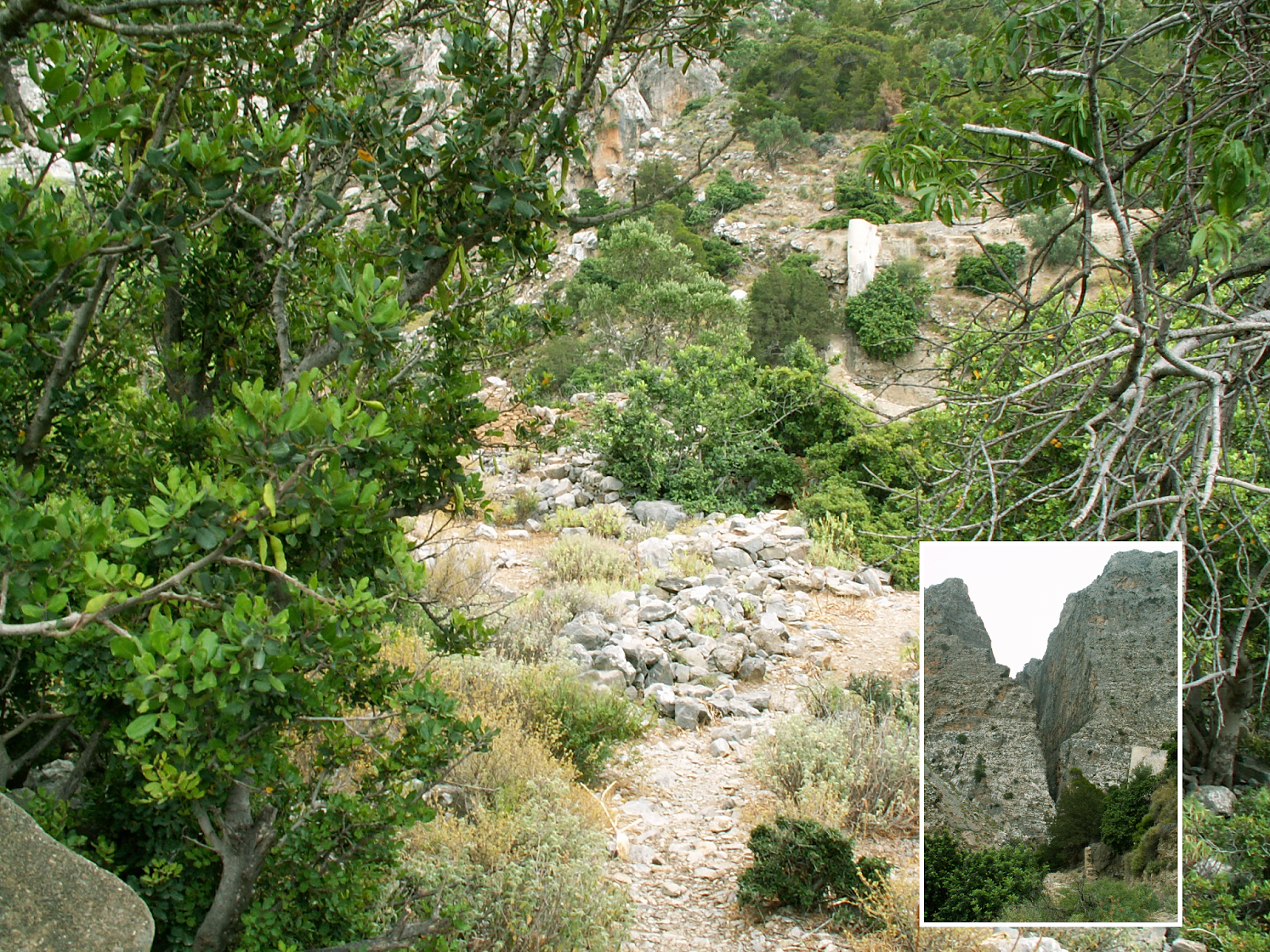 Last week we had a somewhat strenuous scramble around the top of Ha Gorge where, despite seeing many interesting things, we failed to get close to the choughs we were hoping to photograph. This week we’ll go down to the point where the gorge emerges onto the isthmus and see if we can spot the birds from below. Two tracks lead from behind a little church one of which is easy and the other only suitable for goats.

You’ve guessed it, we’ll be taking the goat track.

And here’s a nice little find almost immediately. This little spider, trying its best to get out of our way as quickly as possible, is one of the Jumping Spiders such as we found in The Garden of Small Delights way back in February. That species looked rather like a humbug on legs but this one is much more vividly coloured and is known as the Golden-eye Jumping Spider and from this angle you can see why. The abdomen does indeed look like the golden eye of a much larger animal and would give any potential predator pause for thought.

Last week our nostrils were treated to the glorious scents of pine, sage and thyme but down here in the nether regions as it were you may be recognising a faintly sweet smell and, if you’re a pizza lover, you may even begin to salivate a little. That is because these clumps of creamy white flowers dotted around us are those of oregano.  As with many of the herbs you have in your kitchen it is native to the Mediterranean region. The lovely little beetle currently enjoying the pollen is a False Blister Beetle although some prefer to call it a Pollen-feeding Beetle. It is one of the Oedemera species which are covered in short hairs to which the pollen clings. This one is a female which you can tell from the slender, feminine thighs on her back legs: the thighs of the males are massively chunky.

Talking of females here’s another one. This little lady is a Common Darter Dragonfly. Identifying dragonflies can be tricky as many of the males are red and many of the females are straw coloured and both sexes tend to darken with age. Two clues which may help you: they have dots towards the end of their wings (coloured cells called pterostigma) and these differ from species to species – in this case they are silvery grey which sets it apart from the similar Southern Darter which has reddish brown pterostigma. The other clue is the facial colours, particularly the eyes. I’ve made up a little chart of the heads of our common local species which, in conjunction with the pterostigma, help me to identify them quickly and with a reasonable degree of certainty.

It seems to be quite a day for entomology (the study of insects). Here’s another one and quite a rarity. This is a Cardinal Butterfly and judging from the strong white markings on the underside of the wings I think that it’s another female of the species – it would seem that today is Ladies Day. They are far more common in North Africa and have an inordinate fondness for thistles (as can be seen from the inset picture which I took here on the island a few years back). Notice also the green wash on the upper wing which distinguishes them from other Fritillaries and similar looking butterflies.

Aha! Something for the botanists. Out here on this flat ,dry bit of ground basking in the sunshine  is a plant I haven’t come across before, Fringed Rue. Rue is a plant that has been used medicinally since mediaeval times and, to a certain extent, in cooking as well but it’s a plant to be careful with. It’s a citrus plant (related to oranges and lemons) and, as such, you can rub the leaves on your skin as an insect repellent. However, all citrus leaves contain chemicals which can make your skin very sensitive to sunlight (of which we get rather a lot out here) so you may find yourself swapping mildly irritating insect bites for rather more painful burning blisters.

As we’re out in the open now perhaps we can see those choughs. Plenty of Crag Martins about – like House Martins but altogether duskier and, as their name suggests, can be found around rocky crags rather than urban developments. And yes, up there at the top of the gorge where we were last week – a pair of choughs well out of camera range looking down at us with ill concealed amusement. I’m sure I heard one laughing – chuckling at any rate. Chuckling choughs – I’ll get you one day you pesky varmints! (Anyone remember which cartoon series that catchphrase came from?)

Until next week then – happy hunting.

If you'd like to see inside the canyon (which reputedly contains Greece's longest waterfall) without risking life and limb Crete Canyoning have produced an eye opening album.