Only Connect... A Quiz 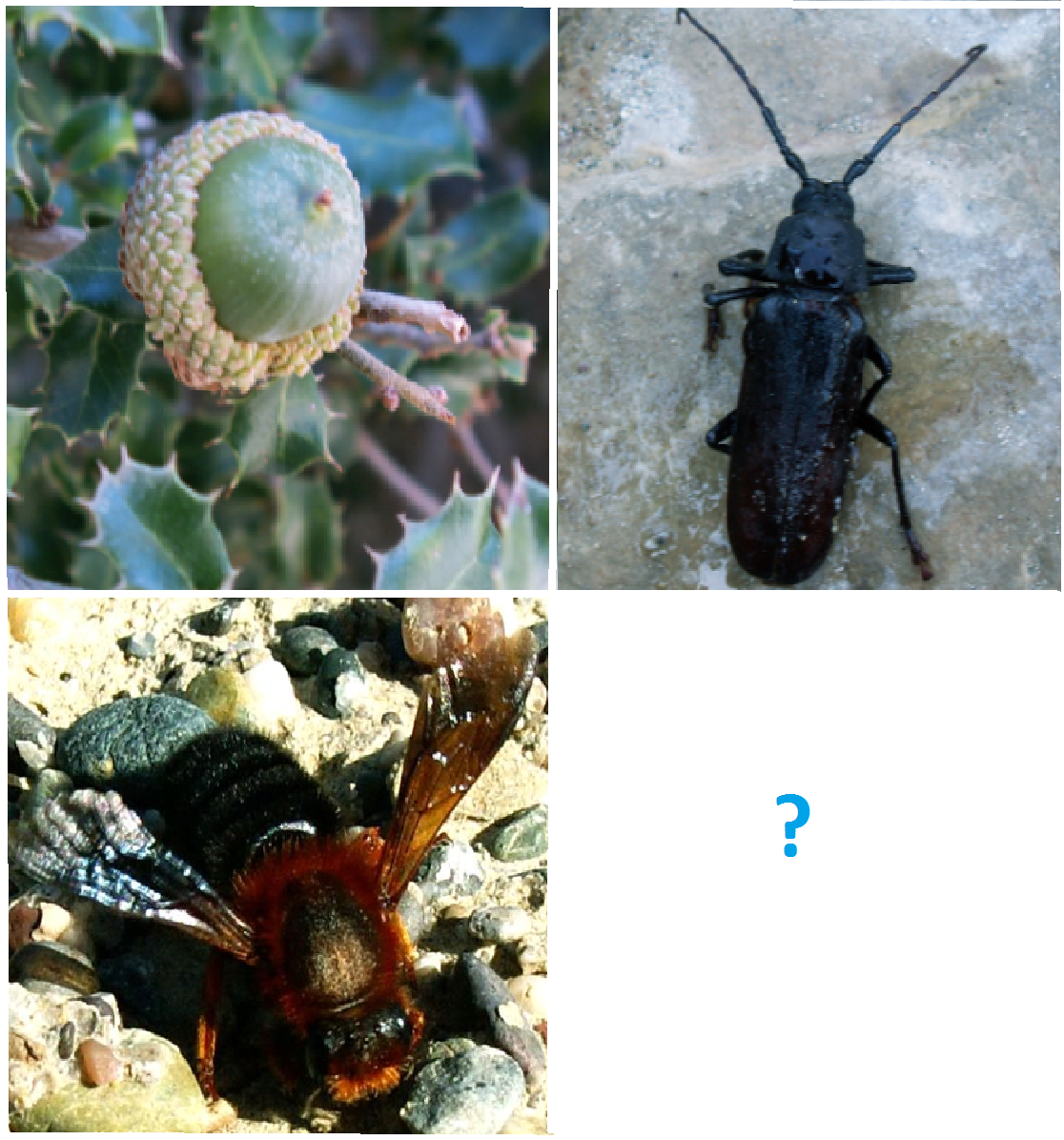 Apart from being the epigraph for E. M. Forster's 1910 novel Howards End “Only Connect” is one of my favourite quiz shows on the BBC. Hosted by the delightful Victoria Coren-Mitchell with her wickedly inappropriate sense of humour, teams of contestants have to work out the connections between sets of obscure and seemingly unrelated clues. The second round features up to three picture clues and the contestants have to predict what the fourth picture will be. I thought, by way of diversion, we’d have a little quiz ourselves this week. Take a look at the three pictures on the left and see if you can predict what the fourth picture should be. Award yourself three points if you can finish the sequence straight away. (Clever clogs).

The first picture is the Holm or Holly Oak which grows quite widely around the northern Mediterranean. Like all oaks it produces acorns and these used to be a staple foodstuff in ancient human history but, as they take special preparation, they have fallen out of favour in more recent times in most parts of the world. We still use them for food in one way though: their roots provide a home for the much sought after truffle in what is known as an ectomycorrhizal association (where both the plant root and the fungus derive mutual benefits). We also use the hard, tough wood for the construction of everything from houses to wine barrels. Still award yourself three points if this helps you to finish the sequence.

The connection between the first and second clues lies in the wood. I fished this magnificent Long-horned Beetle (which rejoices in the name of Prinobius myardi) out of a stream last year and revived him overnight in a tin in my bedroom. (I wasn’t aware that he was capable of reviving until I was awoken by a peculiar scratching noise coming from my bedside table at 3AM). In common with other members of the family Cerambycidae its larvae are wood borers and can cause considerable damage. One of the trees that this fellow likes to bore into is the Holm or Holly Oak. Award yourselves two points if you have the connection now and know what the fourth picture will be.

The third picture is a Mason Bee. Many of us are familiar with the Bumble Bee and the Honey Bee but over 20,000 known species of bee have evolved over the past hundred million years and there are probably many more that we haven’t yet discovered. There are eight species of Mason Bee on Crete alone. They produce neither honey nor beeswax but leave a food store of pollen and/or nectar for their young. And the connection between the Mason Bee and Long-horned Beetles? Mason Bees make their nests in the holes made by the larvae of wood-boring Beetles such as the Long-horns. They are called Mason Bees as they build a mud wall between each egg and seal the entrance with mud. Are you beginning to see the sequence now? Award yourself one point if you can predict the fourth picture.

And finally, the fourth picture revealed: a Club-horned Wasp. These wasps are parasitic on Mason Bees. The female wasp lays one of her eggs on top of the mason bee egg using her sting to penetrate the mud wall. When it hatches the first instar larva eats the bees egg, later, smaller instars feed on the stored pollen and/or nectar so nothing goes to waste.

If you didn’t get the connection, don’t worry. Like the quiz show “Only Connect” the clues are deliberately obscure and you’d need to be a dedicated entomologist to get that one. But the point that I wanted to illustrate was the interconnectedness of nature. The Club-horned wasp needs the Mason Bee to feed its young; the Mason Bee needs the Long-horned Beetle (or some other wood-boring beetle) to provide a nursery and the Long-horned Beetle needs deciduous trees such as the Holly Oak to develop in its larval stage.

This is just one sequence that we know about, there are many, many more that we don’t and yet we continue to destroy habitats in pursuit of short term financial gain without a care in the world about the knock-on effects. The economic argument so often trotted out that “there is no scientific proof that we are causing any long term damage” is ridiculous. 250 years ago we had no scientific proof that oxygen was necessary for our survival (it hadn’t been discovered) but if we’d got rid of it all then we wouldn’t be here now. Surely we know enough these days to stop chasing money as a commodity in its own right, get back to using it solely as a convenient means of exchange and concentrate on what really matters – maintaining a planet that all life can share for generations to come?