Whiffling through the Woodpile – a short history of insects


We’re not going far today, mainly because I’ve got this wood pile to sort out and seeing as you’re with me I thought you could give me a hand. Bit of a cheek I know but woodpiles always turn up something interesting. Like this silverfish for example. Just pop him in the tin and we’ll take a closer look at him. They are pretty easy to recognise; very small insects with tapering abdomens and three cerci pointing left, right and centre. These are the guys you see running across your carpet at night or invading your bookshelves and they’ve been with us since the first plants colonised the Earth some four hundred million years ago. A bold evolutionary step, coming out of the sea like that but they’ve rather rested on their laurels since then as they’ve remained substantially unchanged ever since. Almost as if they are saying “We’ve done our bit – the rest is up to you.”

You will have noticed that silverfish have no wings. You have to jump forward seventy five million years or so for that development to take place. Earth at this time (known as the carboniferous period) was a warm and swampy place, trees were laying down the first coal beds for us to rip up later (though I doubt that this was their intention) and the abundance of plant life was flooding the atmosphere with oxygen.  Insects took to the air in the form of Grasshoppers, Mayflies and Dragonflies and not just delicate little creatures like that Southern Skimmer sunning itself on the fence over there. All that oxygen gave the Dragonflies (or to be accurate: Griffinflies as their forerunners are known) a chance to really stretch their wings, all two and a half feet of them. Put your arm out for a moment and imagine a Griffinfly sitting on the crook of your elbow. One wing tip would be brushing your fingertips while the other one tickled your ears.

Life continued in this heady vein with cockroaches being the dominant land insects - there goes one now. Come back it won’t bite you - it's only a youngster anyway. Anyhow, dear old  Earth passed pleasantly from the Carboniferous to the Permian period a little under three hundred million years ago. Things were simple then: just one sea, Panthalassa, and one continent, Pangaea, rapidly drying out as the interior was an inconvenient distance from the sea generated cloud systems. The transition from swamp to desert led to major developments in plant life (although flowers were still some way in the future) and the true bugs and beetles evolved into the basic forms we know today. And then, 252 million years ago, things suddenly went terribly wrong.


This was the Permian-Triassic Extinction Event, often referred to as The Great Dying, when life on Earth was substantially wiped out. The reason was sudden and due to catastrophic climate change, the cause of which is still under investigation. Could be that all the coal and gas laid down by the great forests got fed up with hanging around under what was to become Siberia and exploded; possibly the warming of the ocean caused a massive bloom of methane producing microbes; or maybe too many volcanoes erupted in too short a time. The old favourite, meteor impact hasn’t been ruled out either. Whatever the cause, life sustaining oxygen was in short supply and animals on land and in the sea were asphyxiated into extinction and this included 83% of the insect genera known to exist at the time. The insects that we’ve already mentioned were among the lucky ones.

Mass extinction isn’t all bad news however. Planet Earth is home to many life forms, including ourselves, and like all houses the occasional clear out can be very beneficial. Think of it as a planet-wide spring clean.  It took a fair few million years for the dust to settle but it gave life, including our insect friends, a clean slate on which to develop in new and exciting ways but it wasn’t until the Cretaceous period (145-65 million years ago) that our story reaches its next plot development. It was during this period when the planet settled down into the form we now recognise, with the continents beginning to settle into place, and we saw the evolution of flowering plants. This gave the insects a whole new food source to exploit and the pollinators appeared on the scene, including these pesky (but still useful) flies that keep landing on us. 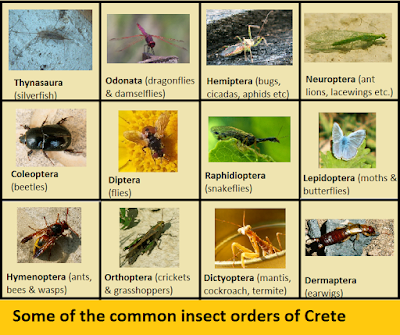 The cretaceous period ended with a bang when a large wandering rock dropped out of space and landed on the Yucatán Peninsula in Mexico. Although this wiped out the dinosaurs, paving the way for mammals such as ourselves to develop, all of the insect orders survived and over the past 65 million years they have been evolving into the families, genera and species that keep our cereals growing, our livestock fed and our species alive. So there you have it, insect evolution in a nutshell. Love them or loathe them we couldn’t exist without them. Well, that’s the log pile sorted, thanks for your help. I hope I haven’t bored you too much with all these geological time periods but sometimes it’s nice to get a new perspective on commonplace things. Here, I’ve made you a little chart of some of the commoner insect orders to be found on Crete (and elsewhere in the world for that matter). You can go out and play I-Spy insects now. So what if you’re in your fifties? It’s never stopped me.