The Dew Ponds of Katharo


We’re taking a break from our trek up the Eden valley this week as I want to take you up to the Katharo Plateau in the Dhikti mountains. Yes, I know we’ve been there before (Cathartic Katharo) but I need your help to examine some summer ponds.

Here we are, all dressed up in muted colours for the occasion, and our first job is to lie very quietly in the mud and see what’s happening. These ponds retain water all through the long, dry summer and I believe that they work on the same principle as the Hampshire dew ponds that the eighteenth century English naturalist Gilbert White described in his book, The Natural History and Antiquities of Selborne. That is “more than double the quantity of dew falls on a surface of water than there does on an equal surface of [moist] earth”. The clayey soil in which we’re lying prevents the water from seeping through the limestone rocks. As you can see it’s a great place for dragonflies and we have birds popping in for a drink. There’s a Cirl Bunting, look. Many buntings have declined in North West Europe due to a lack of weed seeds and insects but they’re obviously alive and well here on Katharo where traditional farming practices are still employed and herbicides and pesticides are not.

Let’s take a look under the water and see what’s lurking there. What do you mean you didn’t bring your bog snorkelling gear? Ok, you sit and watch the Water Striders skimming about the surface and I’ll go down and interview the wildlife. A small Water Scavenger Beetle, though that is a bit of a misnomer as they can be just as predatory as the Predacious Water Beetles. You can tell them apart by the way they swim: these move their hind legs alternately but the Predacious Water Beetles kick theirs out together – sort of doggy paddle versus the breast stroke. We also have a Damselfly larva. These larvae are also known as naiads or nymphs after the female spirits that dwelt in wells and streams in Greek mythology. You can tell that it’s a damselfly and not a dragonfly by those three tail filaments containing the gills through which they breathe. Dragonflies don’t have these and breathe through their rectums (which is not something you should try at home). 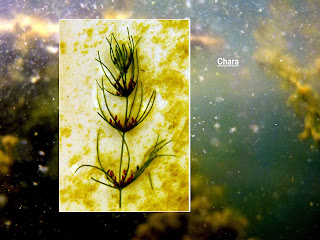 Apart from each other I wonder what else these little creatures are eating? For the omnivores and vegetarians down there we have plenty of this stuff. It’s called Chara and though it looks very much like a plant, it isn’t. It’s a green alga and, as such, is more closely related to green seaweed than flowers. The little red buds that you can see contain reproductive spores and, as you can tell by the amount of Chara in the pond, they are remarkably efficient. This is just the top level of the ecosystem that we can see with the naked eye; there’s far more going on that we can’t see so grab a pipette out of my bag there and we’ll put a drop of water under the microscope.

Ah now, these top two, Closterium and Euastrum are desmids which are green algae, the same as the Chara but they are unicellular. The Euastrum looks as if it has two cells but they are in fact symmetrical compartments of the same cell separated by a narrow bridge. The bottom two, Epithemia and Rhopalodia are diatoms which are more closely related to the red algae. Forensic scientists love these things because if they find them in a murder victim it shows that they were drowned rather than killed and then dumped in the water. If they can correlate the species mix in the corpse with the species mix in a certain pond for instance they can even tell where the person was drowned. Gruesome perhaps but just one of the obscure ways that a knowledge of nature impacts upon our lives.

What a fascinating little pond; water, water everywhere but not a drop to drink. I think that we’d better rectify that and a visit to Yanni’s taverna is a must when visiting Katharo. Yanni is a naturalist himself and you can spend a pleasant hour or two reading the walls of his taverna over a convivial libation. There are pictures and descriptions of birds; books and posters of flowers (provided by our friend Steve Lenton at Cretan Flora) and a section on the fossil mammals of Crete, some of which Yanni himself discovered. It’s surely the best naturalists’ taverna on Crete. Who’s round is it? 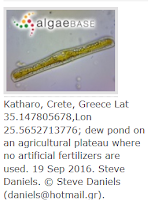 Remember that little diatom called Rhopalodia that we found? It turned out to be Rhopalodia gibba, a species never before recorded on Crete. As such it has now been documented on the world wide Algae Base. Better not drown anybody in that pond then.

I see that my email address is at the bottom so feel to drop me a line, contact me on twitter @cretenaturalist
or via
Naturalists (the facebook page that accompanies this blog)

See you next week.