Every Breath You Take

December 06, 2016
I thought that as we walk down the next part of the gully we’d have a look at air – there’s some, look, right in front of your nose. You can’t see, smell, taste or touch it so what exactly is it? Mainly it’s a mixture of two elements (not a compound – they don’t combine together). The two elements are Nitrogen (78%) and Oxygen (21%). The other 1% contains other elements, primarily Argon.

Every breath you take (don’t worry – I’m not going to start singing again) is for the most part Nitrogen, a vital element for us but the problem is; we can’t use it directly. We need plants to do a bit of work for us like this Rosularia serrata here. It can’t use Nitrogen from the air either, it needs help from special bacteria in the soil that use enzymes to convert the nitrogen into organic compounds that it takes up through its roots. We, and other animals, can then take the nitrogen that we need to produce things like essential amino acids from the plants that we eat. When it, and we, die we pass the nitrogen back into the soil for reprocessing by bacteria.

Air hasn’t always been air as we know it today and if we go grubbing about down there in the dark and damp bits we should find a couple of the major players in the events that led to the breathable stuff that we enjoy today. About four hundred million years ago, when these ferns and later these mosses, were the pioneering land plants oxygen was only running at about 15% but plants, as we know, give off oxygen as a by-product of photosynthesis and over the next hundred million years levels built up to about 35%, an abundance that gave rise to giant dragonflies and things. The rise of oxygen breathing animal life brought the levels back down to a range which we’ve evolved to function in which is about 19-24%.

We seem to have come out into the open air as it were and it looks as if we’re at the head of the oleander highway (see Into The Woods) so we should be able to find some nice insect life in there. We have beetles in abundance. This beefy, black job is the brother of the one we found a couple of weeks back up the valley. That one was Raiboscelis coelestinus with the blue sheen and this one is Raiboscelis corvinus. The other two are Rosemary Beetles, Chrysolina Americana, and they seem to be thinking about expending a bit of energy to make more Rosemary beetles. Which brings me back to oxygen. The reason why it so important to us and all other animals is that we need it to convert glucose into energy in a complex process called catabolism[1]. Simply put, we couldn’t move a muscle without it.

Apart from the composition of air there are two other aspects of it that are important and those are its temperature and humidity, a delightful illustration of which you can see by looking under this rock that I’ve just turned over. The little white cocoons that the ants are fussing over are the larvae.  These, along with the eggs, they constantly move from one place to another within and just outside of the nest to regulate their conditions as the temperature and humidity fluctuate throughout the day and night. They really are the most dedicated of nursemaids. But now it seems we have reached a defile through which we cannot pass, not without ropes and crampons anyway. I suggest that we walk back over the hill, down through the village of Agios Ioannis and pick up our route again a couple of hundred feet lower down.

Just look at that wonderful cloudscape above us. The large, fluffy one is a cumulus cloud (from Latin, meaning heap) while the streaky ones above are cirrus (from Latin, meaning a ringlet of hair). There are sixteen major cloud types in total, all of which contain water vapour in varying amounts evaporated from the Earth’s surface. You may be wondering; if air is 78% nitrogen and 21% oxygen how come your hygrometer says that its 60% water? Firstly it’s because those percentages are for perfectly dry air and secondly that your hygrometer is measuring relative humidity; the partial pressure of water in the air compared to what it could be if it was fully saturated, and not the actual amount of water in the air. Which is a good indicator of whether it is likely to rain or not and thus of far more practical use as a measurement.

So that’s air, in a nutshell. Meanwhile I think I can see the village below us so we’ll explore that next week. 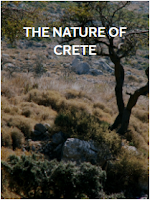 Last week’s marmalade recipe seems to have gone down well so I may well do another in the New Year. Meanwhile if you want to know more about how we convert the sugars in the marmalade into energy then you can read all about it here: [1] https://en.wikipedia.org/wiki/Catabolism

I've just started a magazine called The Nature of Crete on Flipboard. Eventually it will not only contain links to the latest blog but other articles and blog posts about the flora and fauna of the island. If you'd like to read it and maybe even contribute a link then this is the web address: The Nature of Crete