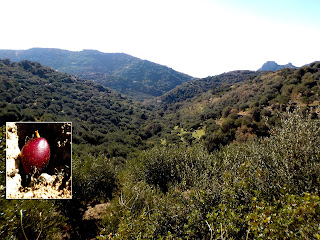 The winter rains have started in earnest and our gullies should be starting to fill nicely now. There is an ancient practice called dowsing whereby you can divine the presence of water by wandering about with a Y shaped stick. Whether this actually works or is merely some sort of ideomotor effect where an action is prompted by the subconscious is open to debate. I prefer to use a simpler technique: walk downhill and when down changes to up that is where you’ll find water if there is any. So the water should be down there somewhere. Just before we start our descent take a look at these harvester ants down here who seem to be having a bit of a problem. Falling olives can be a nuisance. At this time of the year my courtyard is littered with them and they get trodden into the house and make a right old mess. As yet, I have never had one fall and totally block my front door. It would be interesting to stop and watch how the ants solve this particular dilemma but it’s a bit chilly this morning for hanging about so we’ll press on. 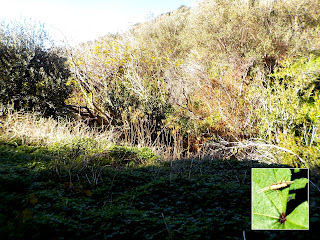 It looks as though we’re getting close to the bottom now but before you go diving in have you noticed these little moths that we’ve been disturbing as we walk through the undergrowth? These are Diamondback moths and although they’re tiny they’re very interesting. For a start, despite their size and the fact that they only fly as adults for about a fortnight they’re marvellous at migration. It’s a European moth that made its way to America in the nineteenth century and has now turned up in the Hawaiian Islands. It also loves cabbages and is the nemesis of commercial brassica growers. A group of European scientists have found a chink in its armour however. They found that given the choice, the moths would prefer to lay their eggs on Yellow Rocket (Barbarea vulgaris) even though their caterpillars couldn’t eat the stuff and died. Weird but true. This one presumably is not laying eggs at the moment as it is on a mallow leaf and unlike cabbages and rocket, mallow is not part of the Brassicaceae family which is the only family on which Diamondback Moths will lay their eggs (even if they sometimes get the genus wrong). 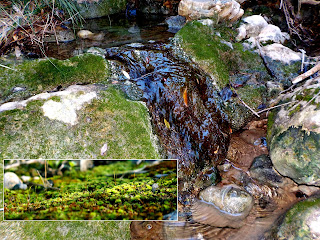 OK, time to get down and dirty and dive into the gully. Great, we have water and with it what appears to be a covering of Moss on the rocks. But they could be Hornworts or Liverworts. All three are popularly (but incorrectly) lumped together as bryophytes and they share a similar but interesting way of going about life. Firstly, distinct male and female bits develop from spores (those are the green leafy bits which are called gametophytes). The sperm from the males swim to the eggs in the female; hence you find ‘bryophytes’ in wet, or leastways damp, places. These gametophytes then give birth to something completely different called a sporophyte (which is the stalky bit with the capsule on top). Sporophytes don’t muck about with the sperm and egg method of reproduction but go for the asexual method of producing spores which then develop into gametophytes and the cycle goes round again. It’s a bit like humans giving birth to a generation of mushrooms that then give birth to a generation of humans again. Sex is really weird down at this level. 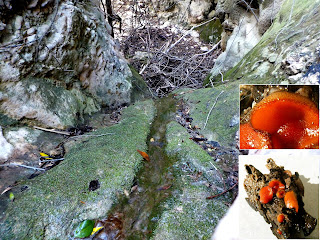 Our next descent looks a bit tricky; a twenty foot slide down into a pile of branches that look to be hiding something akin to a tiger trap. What say you that we just take a look at these little orange fungi that I’ve just spotted on this wet wood and then find a less adventurous route down? These are called Scutellinia scutella by mycologists which is rather boringly from the Latin meaning little shield. I much prefer the common names for them which include Scarlet Elf Cap, Eyelash Pixie Cup and the delightful Molly Eye-winker. The last two are on account of the small hairs on the outside which look a bit like eye lashes. Here, have a look through the hand lens. Pretty little things; you can just imagine the little elves tripping around here at night by the light of their Jack o’lanterns and trying them on for size. I think the place is beginning to get to me, let’s get up into the real world again. 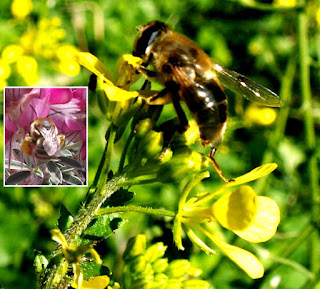 That’s better, back in the world of what you see is what you get. Only not quite. That bee pollinating the white mustard down there isn’t quite as it appears. Look closely at the pollen sacs – there aren’t any. And those eyes look a bit too close together and meet at the top which is a bit odd for a honey bee. And do I detect only one pair of true wings and rather short antennae? I do believe that we have unmasked an impostor. This is no bee collecting honey for the hive; it’s a fly, cunningly disguised, nonchalantly sipping nectar secure in the knowledge that his livery will protect him from predators. A lovely bit of visual crypsis where one insect has evolved to resemble an entirely different insect purely by natural selection.  Back in its ancestral lineage the flies that looked a bit like bees were less likely to be eaten than those that looked more like flies and so the bee look-alikes survived to breed more look-alikes. The more their offspring looked like bees the more they survived to breed until now they are almost indistinguishable from the real thing.

We seem to be approaching the point where other small valleys are coming in to join our main valley so, with a bit of luck, we’ll have even more water to splash about in next week. See you then. 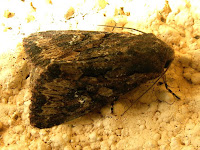 A question to my friends in Northern Europe: What have you done with my moths? December has come and gone and my terrace wall should be a teeming metropolis beneath the light. So far I’ve seen nothing more than the odd noctuid and pug. Have they stopped migrating?