“Ferma is a settlement in the municipality of Ierapetra on the island of Crete. It is situated at the coast, 11 kilometers east of Ierapetra. Its beach is well known for its beauty.” 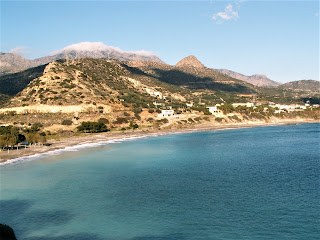 That's the Wikipedia entry for our village which ranks, for completeness, marginally above The Hitchhiker's Guide to the Galaxy entry for Earth as “Mostly harmless.” I thought that before we set off on our next expedition it would be nice to fill in a few more details. Last week we were down in the bay on the “beach well known for its beauty” so let's wander up onto the cliffs and take a look at the west end of the village. 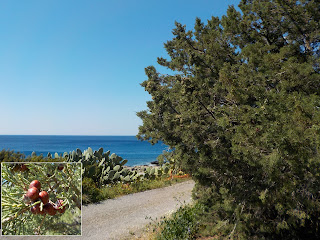 The cliff top path runs from the little harbour and joins the main Ierapetra to Sitia road near the petrol station. It's a very pleasant walk with plenty of wild flowers and birds which we did a few years back (A Walk on the Cliffs) but we'll turn off here at this juniper bush and walk up into the village. I mentioned before that juniper berries are used to flavour gin but they're good in the kitchen as well. My favourite is Casseroled Pork Chops with Juniper and Thyme Gravy. 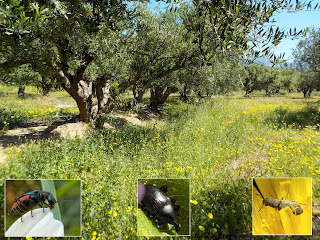 Here in the olive groves we have a little overgrown ditch and if we get down in amongst the greenery we should find a few beetles. Here's one – a Malachite Beetle, so named from the greenish colour of his wing cases; malachite being a copper based mineral of similar hue. I see that you've found another of those black Flower Weevils that we saw a couple of weeks back (If Spring Never Sprung) and the little brown job is a Danacea of which we have half a dozen similar looking species here on Crete. The first and last are both in the same family, the Melyridae or Soft-winged Flower Beetles. 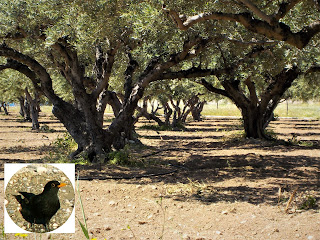 As you can see some of the olive groves are meticulously rotovated while others are left to their own devices. This is useful for us as we can hide ourselves in the herbage here and watch the birds in the cleared grove next door. Male blackbirds, which are all black, have bills ranging from deep orange to yellow apart from the juveniles which have brown bills. A male defending his territory will react more aggressively towards an orange bill than a yellow one and won't deign to bother with a brown bill – they're a bit like judo belts really. Incidentally the females aren't too fussed about the colour so long as the bill is shiny. But that's females for you. 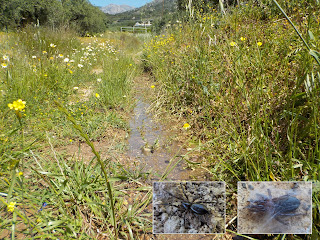 We're coming up to the main road now, the path is a bit more worn and we can see the water. Let's flip a few stones and see who's lurking beneath. Aha, a spider. It looks to be a Ground Spider. Let's see if we can persuade it out of its silk pouch for a moment. These spend their day concealed like this and come out to hunt at night. They run their prey down and sink their fangs in rather than sit in a web. Venomous, but not dangerous to us humans.

There are quite a few places to get a bite to eat and a drink in the village, what say we go and find one? 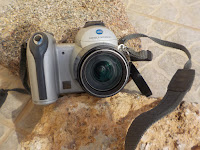 Those of you with a keen eye may have spotted a slight difference in the quality of the photographs this week. This is because my Konica Minolta, which has given me stalwart service over many years, has finally given up the ghost and I'm relying on my little Nikon Coolpix S33.