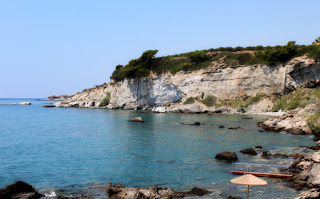 I thought I'd save the best until last. For the past weeks we've been ambling around the village of Ferma from the hills above to the underwater world of Livadi bay but at the eastern end of the village there are a series of tiny coves that few know about. From up here on the eastern cliff you can see the curvature of the horizon which means that we have a fair few steps to negotiate to get down there. 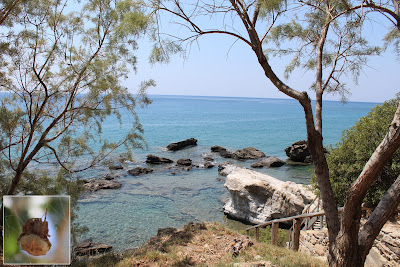 It's over forty degrees today and I pity this poor spider with a mass of egg cases on her back. That's one hot mamma. Spiders of course are arachnids, named after a Greek peasant girl called Arachne and I'll tell you her story as we make our descent. Arachne had a talent for weaving, quite a prodigious talent in fact. So much so that she came to the notice of Athena (the goddess after whom Athens is named) who also considered herself a dab hand at the loom. Now gods and goddesses tend to get a bit sulky when us mere mortals approach their standards of excellence and Arachne was in danger of not just approaching but surpassing Athena's talent so Athena decided that a competition should be held to prove who was best. In most versions of the story Arachne won (although it was a close run thing). Whichever, Athena still claimed the ultimate victory on the grounds that Arachne's talent could only have been given to her from the gods and therefore she was only a mere instrument of Athena's own talent. “Nice try,” says Arachne, (somewhat unwisely) “but how about just admitting you've been beaten and being magnanimous in defeat?” Not being particularly fond of eating humble pie Athena promptly turned Arachne into a spider and cursed her and her descendants to weave nothing but webs forever more. 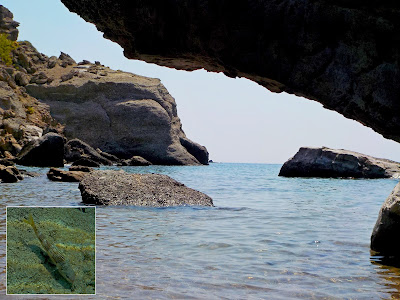 Here we are at last and a nice little overhang to keep the sun off our heads. Do you see that little fish down there? Look at the way he's probing the sand with those two feelers. He's a goatfish (often called a red mullet although he's not closely related to the grey mullets in the way that red and grey squirrels are which is rather confusing). Those feelers are called barbels and he's using them to probe for food. This one is probably a youngster judging by his size and the fact that he's so close to shore. When he gets bigger and bolder he'll brave the deeper waters. 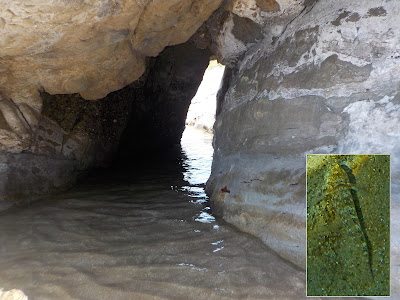 There's a little channel here leading to another cove, what say we crawl through and investigate? There's another little fish here, superbly camouflaged against the sandy bottom. This one is a Goby, scientifically Gobius incognitus and I mention this only because the incognitus refers to the fact that, despite being common and widespread, it was only discovered to be a separate species from other gobies a couple of years ago. 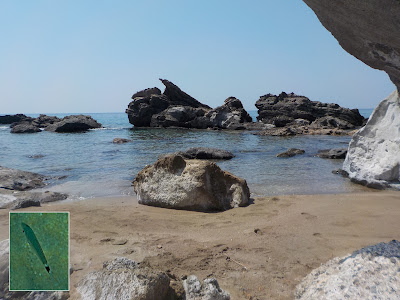 Well, well, well, another private little cove, not only with built-in sun shade but a sandy beach as well. The little fish that we saw with the black and white markings near the tail as we swam in were Saddled Bream. It is one of a number of different sea breams that are important food fish in the Mediterranean. As a group, sea breams have been around for about 55 million years with the Saddled Bream making its first appearance about 48 million years ago so we've been eating them for as long as we've been in existence. All this lazing about in the shallows is very nice but I think we'd better start the long climb back. 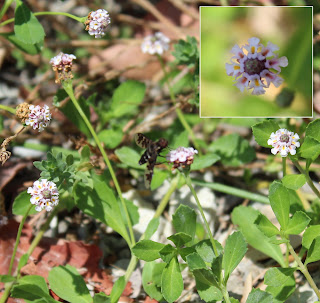 Anyone for Turkey Tangle Frogfruit? A lovely little plant of the Verbena family but what a weird name. It makes one think that frogs like to eat it whilst turkeys trip over it but honestly, I've no idea how it came to be called that. I know that two or three species of caterpillar like to dine on it and it is supposed to cure everything from suppurating sores to stones to the common cold (or leastways to aid in recovery from same). Meanwhile we don't have any caterpillars but we do have a nice little bee fly come in for lunch. I think that this one is of the Exoprosopa genus, a useful little fly as it parasitises, among other insects, the larvae of locusts and wasps. I've seen neither the plant nor the fly around here before so that's a lovely way to finish our tour of the village of Ferma. And now I think... a cool beer in one of our tavernas is in order.

It really is getting stupidly hot now so I suggest that we take a little break for a few weeks and get together when the weather cools down a bit towards the end of next month. Until then, enjoy the rest of the summer (or winter if you're in the southern hemisphere) and follow me on Google+, Facebook Naturalists  or Twitter @cretenaturalist for details of Series 6 of the #Cretenature Blog.

Having just published this and checked it I noticed an advert in the side panel for Life Science Toolbox that looked interesting. I generally ignore adverts (like you do I expect) but the ads are starting to come in that are relevant to our interests so keep an eye on them, you never know what you may find.