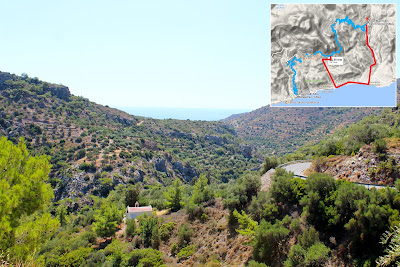 As we leave the village of Orino we have a decision to make. There are two ways in which we can drive on to our next port of call which is Stavrochori; we can go over the mountains (which is prettier) or return to the coast road (which is less painful). Although there is a lovely tarmacadamed road leading out of Orino it isn't quite finished yet and the last couple of miles into Stavrochori is a dirt track. Quite drivable in a 4x4 but a bit rough on our little Alto. Now may be a good point to mention hire car insurance: you are not automatically covered for off-roading (not even for a quad bike). In view of that, and the fact that there's a little reservoir I want us to take a look at, we'll drop back down to the coast, turn left at Koutsouras and come up through the valley.

According to my reckoning the reservoir should be somewhere down beyond that church. 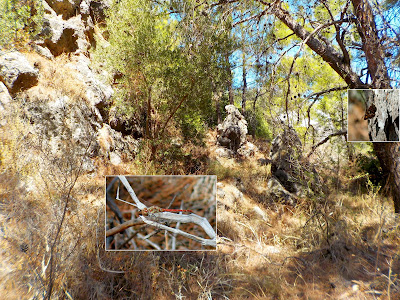 OK, so it wasn't. No matter, I'm sure we'll find it somewhere nearby. Meanwhile here's a lovely bit of rocky valley which we can explore so let's see who's about. Autumnal reds and browns seem to be predominating which makes the occupants a little hard to detect but a Common Darter has just landed down there ahead of you. As their name suggests, they are one of the most common dragonflies in Europe. In the more northerly latitudes you'll only find them on the wing in summer and autumn but down here in the south they fly all the year round. The butterfly that has just landed on that pine tree over there, on the other hand, is not so common. It is a Cretan Grayling and you'll only find it here on Crete where it is fairly abundant. A couple of nice insects to start with but let's go on back up the road a little and have another go at finding this reservoir. 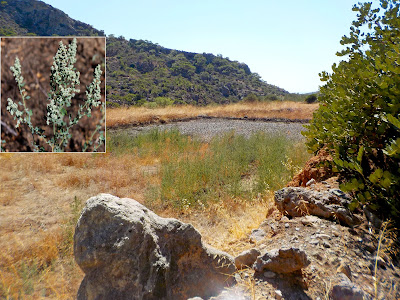 Well, here it is, and what a sorry sight it looks – at first glance but the film buffs among you will doubtless be aware that Deadpools have amazing powers of recovery and this one will be no exception. The autumn rains will be upon us soon for the first time since May and a myriad plants and creatures will return. There must be some moisture still down there because we have a fine covering of Nettle-leaved Goosefoot. This is a common edible plant of Europe, Asia and North Africa which is also well established in parts of the New World. It is part of the Amaranth family which makes it a close relative of Spinach and you can eat both the leaves and the seeds. The seeds however, which can be ground to make flour, should be soaked first to remove the saponins which are somewhat bitter. Let's have a poke about down there and see what we can find. 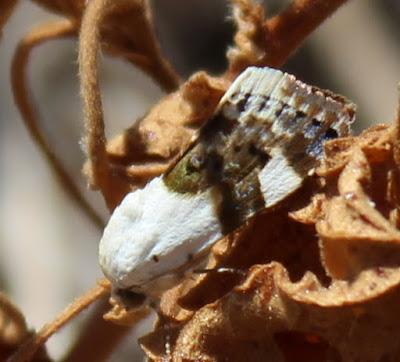 Butterflies are beautiful and moths are drab is a widespread misconception. Moths can be just as attractive, you just have to look a little closer sometimes. Take this little fellow for instance; a lovely little moth of the Noctuidae family called the Pale Shoulder. As a caterpillar he's not over fussy about foodstuffs but prefers mallows, bindweeds, dandelions and also goosefoots which is why it is not surprising to see him here. 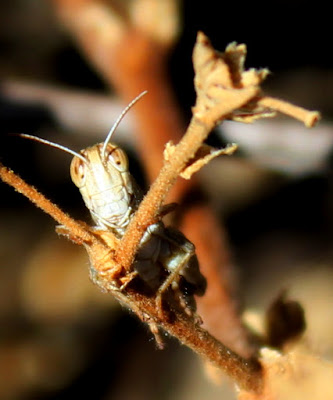 Hello, who is this grinning at us like a petrified cartoon character? It's alright, we won't harm you. This is a Grasshopper of the Calliptamus genus and despite that formidable dentistry he is a vegetarian (or herbivore in zoological parlance). The dentistry of any animal can tell you a lot about its evolution and current eating preferences. We, for instance, are omnivores with teeth that have evolved for eating both meat and vegetable matter and our digestive systems have likewise evolved to digest and utilise both food sources. Vegetarianism is a valid lifestyle preference but rather goes against our biology as a species but each to his own. Hark! Did you hear that mechanical shriek like rusty farm machinery? That was either a local farmer trying to coax some life into his rotavator or... 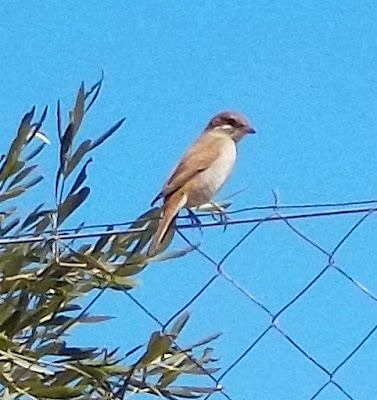 There it is look, just popped out of that olive tree onto the fence. It's a Red-backed Shrike, either a female or a juvenile, and I only ever see them at this time of year. They have a somewhat eccentric migratory pattern. Those that spend the summer in Spain or the south of France head east to northern Italy or Greece before wheeling right to come down over us on their way to the eastern end of the north African coast. Scandinavian birds fly south west to Italy initially before turning south east and following their French and Spanish brethren. What is more, they do it at night and are not above breakfasting on other small migrating birds. They'll also go for reptiles and small mammals but chiefly they'll sit on a perch like this and then dive in to the undergrowth for insects like our friends the moth and the grasshopper. Having caught its prey it will often impale it upon a tree thorn for later consumption and for this reason Shrikes are also known as Butcher Birds.

All of which is making me feel rather peckish so let's head off into the village where there are no fewer than three good tavernas to choose from. 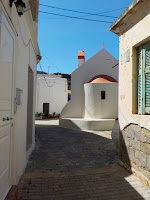 Stavrochori is quite a large village and somewhat spread out but I think that if we make our entrance through this alleyway then the square should be up here somewhere, or maybe just around this corner, and down these steps, or possibly round the back of that church. We seem to be back on the main road. I know it's in here somewhere. Try those steps. OK lets' go back to the car and drive around to the other end of the village and attack from the other side. 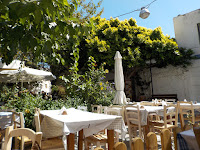 Can anyone smell souvlaki cooking? You can? Follow that nose! There. Simple when you now how. Just like buses really, you don't see a taverna for half an hour then two come along at once. A nice bit of shade though and they've even got an ornamental pond. Now, where's the beer fridge?