To the Village of Orino

Much as it grieves me to leave Nikki's kafenion in Schinokapsala and all those delicious grapes we shall press onwards and upwards to the village of Orino. As we leave the village, heading east, we are at about 1300 feet (400m). Where we are heading is over 2000 feet up in the Thriptis mountains and there is some pretty spectacular scenery upon the way. 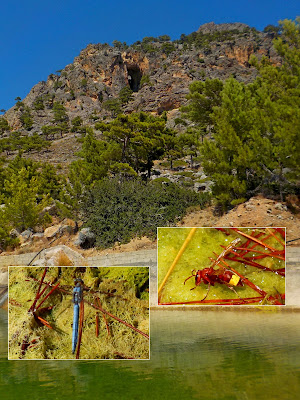 Ah, there's the turning for Mavros Kolimbos and just past here on the left is a little reservoir that's always worth a visit. No birds today, although a pair of ravens have just cronked overhead, but we have a couple of little friends taking a drink at the water's edge. Firstly we have a Keeled Skimmer of the Orthetrum genus. The males of this genus are easy to recognise by their powder blue colour (as opposed to the metallic blue of the much larger Emperors of the Anax genus). The other fellow taking advantage of the algal mat as a landing stage is an Oriental Hornet. This is an east Asian/north African species that appears to be spreading into southern Europe which is not good news for bee keepers as bee hives appear to be one of it's favourite food sources with the bees and their larvae providing protein and the honey providing carbohydrates. On the other hand, they're great pollinators and they are not aggressive (you can get up close and photograph them) although the sting is painful if you happen to sit on one. 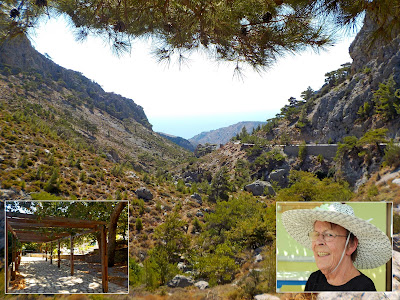 As I promised there are lovely views up through the mountains. This is the top of Red Butterfly Gorge, the lower end of which we visited a few years back and just around the bend is Orino itself with its lovely pergolaed village square. And now I should like to introduce you to my wife Christina who will be my nose and ears for our excursions. I've been virtually anosmic for years and I'm pretty near deaf in one ear so I can never pinpoint where anything is. Christina, on the other hand, is virtually blind but between the two of us we can muster up a good set of senses. Anyhow, we'll leave Christina here chatting to a Chaffinch that she assures me is in that tree to my left and go and investigate the top end of the village square. 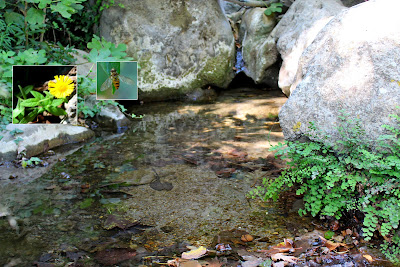 A nice little pool before the stream dips under the square with some Maidenhair Fern and what looks to be a little patch of Fleabane growing over there on the left. And right over there at the back, a Marmalade Hoverfly has just landed. Not the most spectacular of insects you may think but hoverflies are important biological control agents (this one's larvae eat aphids) as well as being great pollinators. They also migrate long distances and have their own monitoring scheme at Exeter University in the UK as we try to find out more about these little guys and how they help our agricultural efforts (before we destroy them all with insecticides). What I don't see here are any frogs. Maybe we'll have more luck on the other side of the square where the stream re-emerges.

Now, just across the road I see a little alleyway and with luck it will lead us down to the water's edge. Hmm, a lovely old tree and a lot of concrete. I think that we'll have to try and get further down. Tricky but 'do-able'. 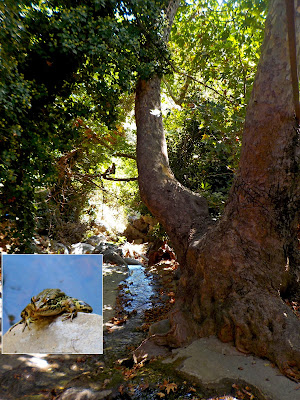 And worth the effort, no less than five Cretan Frogs taking the morning sun. Yes, I did say Cretan Frogs, you'll find them nowhere else in the world and they have a certificate to prove it. To whit: “The species status of Pelophylax cretensis is "confirmed" by short mtDNA sequences and a large number of private allozyme alleles not found in any other water frog.” so the IUCN Red List tells us. Unfortunately it also tells us that it is an endangered species. Like any species endemic to a particular island it is vulnerable to a major disaster such as Santorini blowing its top but in addition habitats like this are declining. Not only is this part of the island getting drier as the climate warms but what water there is gets forced down these ubiquitous plastic pipes for agricultural use downhill. And there's the rub; the human population of Crete needs agriculture to survive economically, the burgeoning world human population needs more and more agriculture to feed itself and the cost is biodiversity. What is particularly galling is the amount of water that gets wasted through leaky pipes and inefficient watering. The technology exists to ameliorate these problems but agricultural water is still cheap on Crete and technology is expensive. Back to simple economics again. The problem will undoubtedly solve itself. As water becomes scarcer it will necessarily become more expensive and better water control will become a viable option. But why wait until then? Better watering practices now will keep the water prices low as well as saving money in the meantime (water is cheap but not free). Meanwhile we'll enjoy the frogs while we still can and in case anyone is thinking “who needs frogs anyway?” guess who eats the cockroaches that invade the greenhouses, to say nothing of mosquito larvae. If you don't want Crete to be insect heaven then save water and save a frog I say.

There's a nice little kafenion in the village but unfortunately it is closed today so we'll mosey on back to Schinokapsala. Meanwhile lets see how Christina is getting on with her chaffinch.

“What have you got there?”

“A sweet lady came and gave me this bag of apples and walnuts to have with my coffee.”

“How lovely. I wonder what would happen if I sat you outside Lidl's with a hat?”