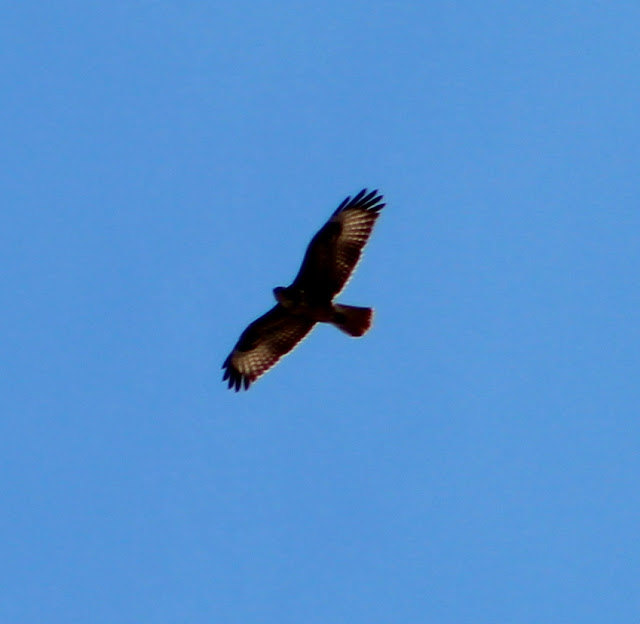 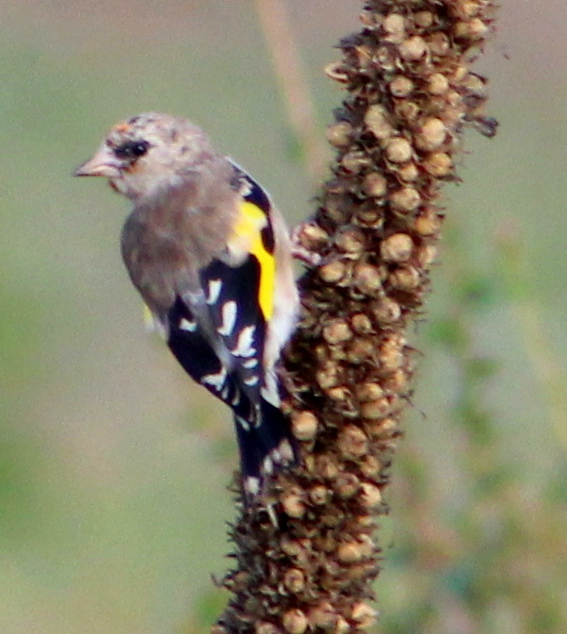 As our little band negotiated the steep, narrow alleyways through the village and emerged on the hillside above the plateau we did indeed see Grifon Vultures and other high flying birds but it was the smaller passerines that really brought the day alive, particularly the flocks of Goldfinch. These birds are resident here in Crete but in the autumn they gather in flocks, their numbers swollen by birds migrating south from eastern Europe. As we exited the top of the village however, it was domestic fowl that caught the ever observant Betty's eye.

“Oh, look,” she said, looking up to where a group of birds were admonishing us from their pen on top of a house “turkeys!”

“Actually,' I said, not wishing to dampen her enthusiasm, “I think you'll find that they are guinea fowl.”

“They're too tall for guinea fowl,” Betty challenged.

“They're standing on the roof,” I pointed out. 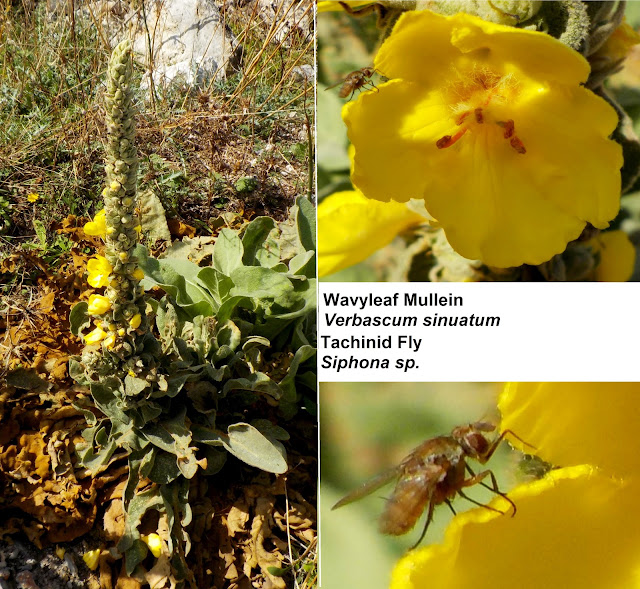 Meanwhile, back to the chaffinch. The tall plant upon which she is perched is a Wavyleaf Mullein and the landscape was littered with them in various stages of life. Apart from providing staging posts for the goldfinches, leaf warblers, stonechats and sparrows, all of which were gaily flitting about on this fine autumn morning, I noticed that one had also attracted a tachinid fly. Not the nicest of flies; their maggots chew their way into unsuspecting caterpillars and eat them slowly from the inside, making sure to keep them alive as they do so, until they are almost ready to leave their host. At this point they feed indiscriminately, the caterpillar dies and the maggot wanders off to pupate in the ground without so much as a by-your-leave. 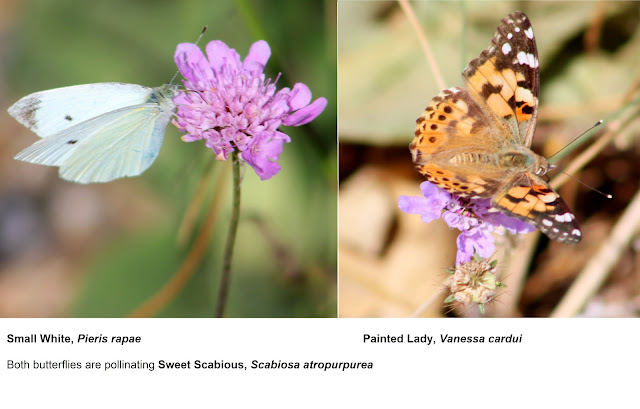 Caterpillars that are not devoured from within eventually become butterflies, of course, and these were dancing around at our feet, enjoying the nectar rich Sweet Scabious that grew by the side of the track. The name of the plant derives from the fact that it was used to treat scabies (an itchy rash caused by a mite infestation under the skin) in the middle ages. The Small White butterfly is a male which has only one spot on each forewing whereas the female has two. The other butterfly is the amazing Painted Lady which, although resident here, occurs in larger numbers in autumn and winter like the Goldfinches and the reason is the same: they migrate. Over six generations they make an incredible 9,000 mile round trip from Africa to the Arctic and back (see Secrets of Painted Lady migration revealed ). 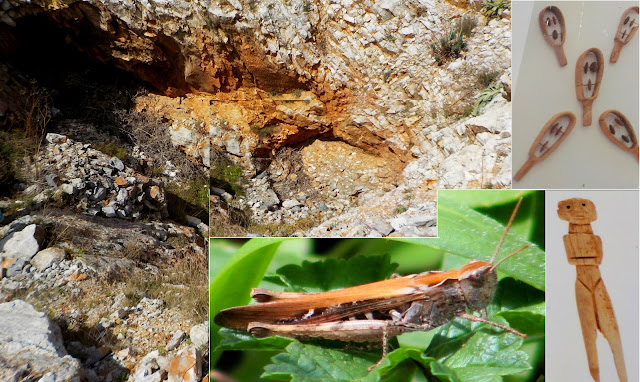 Noticing a sign at the side of the road pointing the way to the Cave of Charalampos, Bert decided to go and investigate. Seeing her loving husband peering into what appeared to be a very large hole in the ground Betty thought that she had better go and join him to 'make sure he doesn't fall in' (at least, I think that she said doesn't). I trailed on behind, pausing to take a photograph of an old friend, Chorthippus bornhalmi. The 'cave' turned out to be a rather unimpressive hole in the ground. Presumably the roof had caved in since the 18th century BC when it was a seven chambered ossuary. Besides the bones, archaeologists also found clay figurines and musical rattles called sistra about which, I expect, they got very excited. 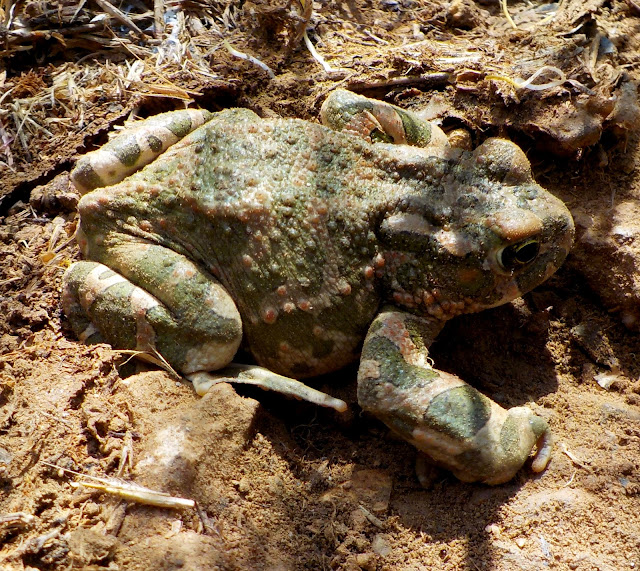 Having quickly exhausted the thrill of the cave I took to my favourite hobby; rock flipping (there used to be an annual rock flipping day but it seems to have died a death in 2009) and discovered a lovely little Green Toad.

“Amphibians and reptiles are often put together,” said Bert, getting down to take a closer look, “is that because they are closely related?”

The toad and Bert looked at each other with mutual interest whist I wracked my brains to remember who evolved when.

“Yes,” I replied, “Amphibians evolved from the early fish and have both lungs and gills. Reptiles are an offshoot of Amphibians and have only lungs. Mammals, such as ourselves, and later, Birds, are offshoots of reptiles.”

“Talking of reptiles,” interjected Betty, “I saw a huge black snake here on Crete once and I was told that it must have escaped from a private collection. What do you think?”

“About two inches in diameter,” she indicated, joining thumb and forefinger together, “and it stretched all across the road with its head disappearing into the undergrowth on one side of the road and its tail out of sight on the other side.”

“Not one of the four Cretan snakes,” I ventured “but I know what it sounds like.”

“What?” asked Bert, carefully replacing the stone over the now disgruntled toad.

“It wasn't a water pipe,” said Betty, indignantly, “it moved”.

“They can be quite lively,” I explained, “if they get an air lock.”

Betty was not convinced and I had to confess that, not being familiar with all the snakes in the world, an escapee remained a plausible alternative. 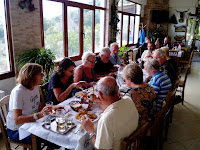 Thanks to all at Spani's Taverna in Charalampos who hastily rearranged their restaurant furniture when we descended upon them en masse and they also provided an excellent menu. The barbecued chicken and roast potatoes were beautiful. 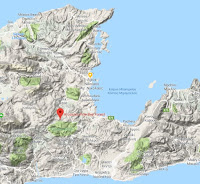 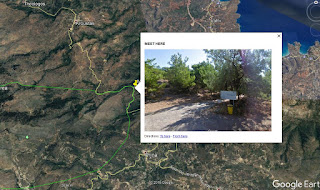 A mushrooming we will go (and hopefully find many more interesting things besides). Here and above are the maps. Take the Kroustas - Prina road and look for the only yellow litter bin on that road. See you on Sunday 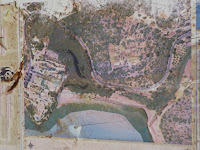