Here, on the east bank of the River Cocker, sits a woodland wilderness. Cockermouth spreads out all around it, but this bit has never been developed. The reason being that there is only a couple of metres between the river bank and a steep bluff which is totally unsuitable for building upon. There is a small riverside path, wet and muddy, which can be reached by any of three sets of earth steps, held in place by plank and post. So, wellies on, and let’s go and see what we can find down there. 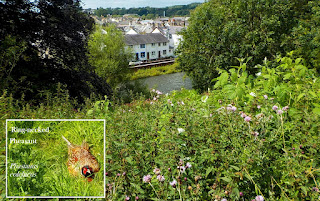 Plenty of thistles being visited by insects, a stand of Rosebay Willow Herb away to our left and a nice glimpse of the town through the trees. Mind how you go, down the steps, and don’t trip over the pheasant. I mentioned pheasants in passing last week at Muncaster Castle but here are a few interesting pheasant phacts: 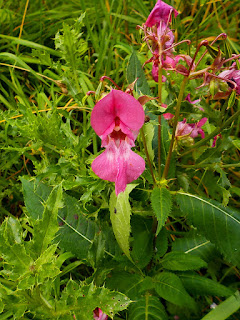 The pheasant is an introduced bird and here we have an introduced flower. This is Himalayan Balsam and it came over to England in 1839, according to The Open University, along with Giant Hogweed and Japanese Knotweed. They were relatively cheap ornamental garden plants, which would have been fine if that’s where they’d stayed. They didn’t, and now all three are a problem. This one, for example, grows prolifically on river banks and pushes out the native plants. Bad enough, but it also dies down in the autumn, leaving great bare patches of earth which can get washed away when the river floods. I see that someone has been pulling them out by their roots, which is all very good, but be careful not to tread on them or you may get seeds stuck to the bottom of your boots that will undoubtedly come off next time you’re walking along some other river bank that doesn’t have them yet. 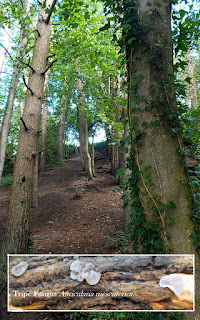 I see some rotten branches up there, so let’s go and have a poke around and see what we can find. There’s some nice Tripe fungus here growing on this decaying Beech. It likes Beech and Elm, but sadly, since the spread of Dutch Elm Disease back in the 1970s, which wiped out more than 25 million trees in the UK, they are rarely seen these days. The scientific name for this fungus is Auricularia (referring to the ear like shape of members of the genus) mesenterica, which is Ancient Greek for middle intestine – hence Tripe Fungus. Unlike tripe however, it isn’t edible. According to First Nature, it won’t actually harm you but it’s tough, rubbery and tasteless. I wonder who had the job of finding that out? 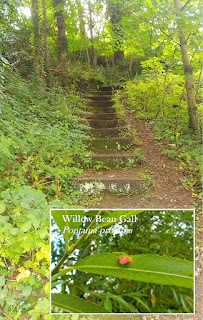 Here are some more steps, leading back up to the road, but before we ascend, just take a look at these pink, bean shaped lumps on the underside of these willow leaves. These are Willow Bean Galls and they’re produced by a small insect called a Sawfly. Like many insects with ‘fly’ in their name, they are not flies at all [Dipterans] but related to ants, bees and wasps [Hymenopterans]. The Quick Guide to Creepy-Crawlies puts all these so called flies into their proper places, so that you can at least begin to identify who’s who. The saw part of their name refers to the saw-like egg laying tube of the female (called an ovipositor) which she uses to saw into the leaf and lay an egg. A small green, caterpillar-like larva hatches from the egg and starts to eat the leaf. This stimulates the willow to produce the gall which feeds the larva and protects the rest of the leaf. All clever stuff. 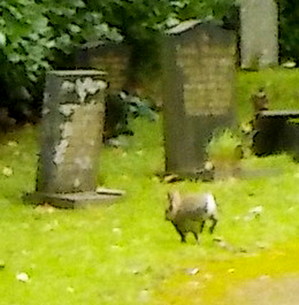 Now for these steps. Not so steep as I thought. I think we’ll go back via the cemetery – always a good place to search for wildlife. Oh look, another introduced species, a rabbit. We’ll chat about rabbits at a later date. What with rabbits and pheasants all over the place I’m beginning to feel hungry. I wonder what herbs would go best with pheasant, rabbit and wild mushroom pie? I feel a recipe for Steve's Wild Kitchen coming on.

Until next time, stay safe and be happy.