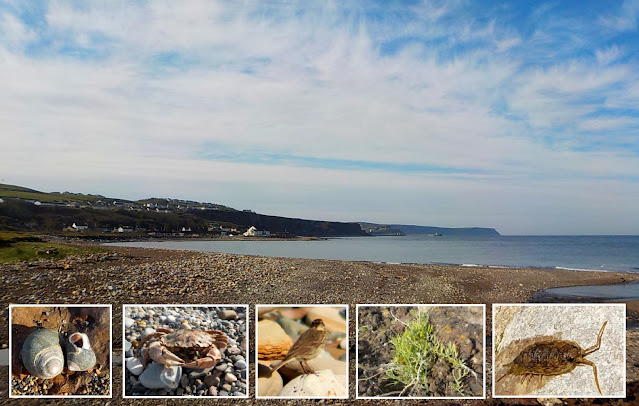 Those of you who know me of old, are fully aware that I'm rarely happier than when I'm beside the seaside. Particularly when there are rock pools involved. Today we're off to Lowca beach where marine molluscs and crustaceans await us, plenty of birds on the shoreline, and some interesting plants to observe and maybe eat later on. 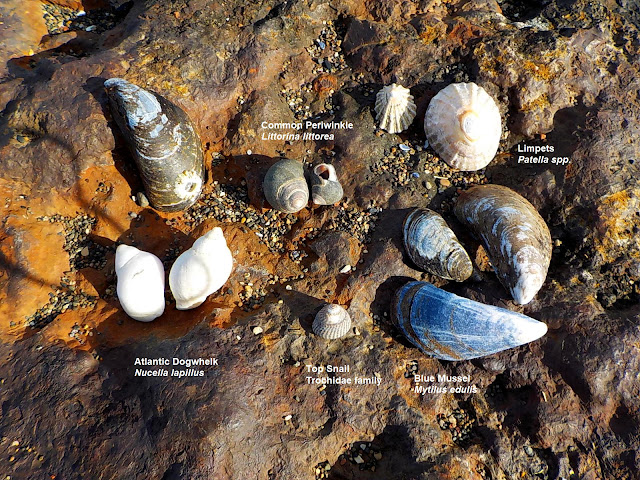 Let's start with the molluscs. Collecting seashells is a worldwide hobby, there's even an International Seashell Collectors Club. Most of these are Gastropods, as are the slugs and snails that you find on land. The exception is the mussel which is a bivalve, as are oysters, clams and scallops. These have two half shells joined with a hinge. Besides the mussels, we have limpets who's claim to fame is their teeth (of which they have 100 rows) that are the hardest known biological substance on earth. We also have some Common Periwinkles, Atlantic Dogwhelks and even a little Top Snail.

There are quite a few crab carcases on the tide line too. Despite its deep orange colour this one is known as the European Green Shore Crab, or variations on that name. Here in the UK, for example, we refer to them simply as shore crabs. This is a very invasive species. Native to the European and North African Atlantic coasts, including the North and Baltic Seas, it has now spread as far as the Pacific coast of North America and the coasts of Australia and New Zealand. 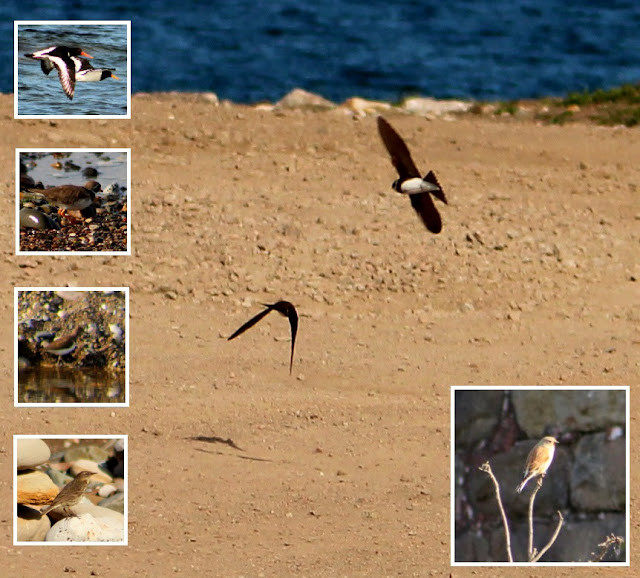 As we've been walking along we've had a couple of Sand Martins darting about which have arrived from their overwintering grounds in southern and east Africa. Our friends the Oystercatchers are patrolling the shore line whilst, rootling about on the tide line is a Ringed Plover with his distinctive bright orange legs. There's a small stream running down ont the beach where a Common Sandpiper is investigating. You can tell that ity's a Common Sandpiper because the white breast feathers extend all the way up to the shoulder. We also have a Rock Pipit, obligingly standing on a rock, and in the hinterland behind us, a Linnet is surveying the ground from his vantage point atop a woody shrub. 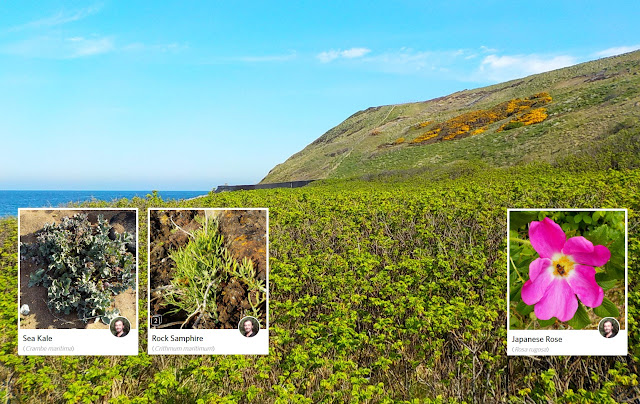 Looking behind us, there is a great swathe of greenery which will be very pretty later in the year as it is all Japanese Rose. Unfortunately, this is another of those invasive species, which you may remember, we discussed up the coast at Siddick Ponds, earlier in the year. There are also some edible plants down here. There is Rock Samphire growing on the back wall (not to be confused with Marsh Samphire which is entirely different). For my thoughts on the edibility of Rock samphire see Snakeless in Sisi. We also have some Sea Kale. The blanched shoots of these were a Victorian delicacy and one of the most expensive vegetables around at the time. The leaves are also edible but they are very strong in flavour, to the point of being almost unpalatable in the case of the larger leaves. The smaller leaves can be cooked the same as you would for curly kale. Despite their names, Sea kale is more closely related to cabbage and chard than to Curly kale. 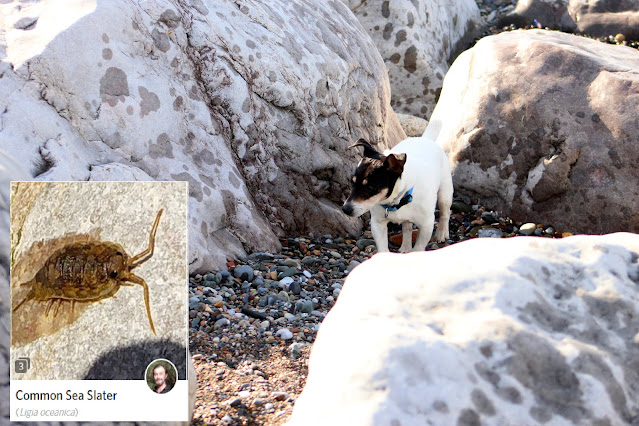 It looks like Jack has found a Sea Slater and isn't quite sure what to do with it. These are common inhabitants of the littoral zone (the beach and the hinterland behind it) and, as you can see, it looks like a woodlouse, to which it is closely related. The term louse is a misnomer as they are not lice at all (which are insects) but isopods which are a type of crustacean, the same as crabs and lobsters. (Woodlice and Sea Slaters are covered in pages 56-57 of The Quick Guide to Creepy-Crawlies)

That about wraps it up for today. Oh, I do love to be beside the seaside.

See you next week