Sofia, the capital of Bulgaria, is an absolute delight – even in March when the temperature struggles to get above freezing. We were lucky; of the four full days we spent there we had wall-to-wall sunshine for three of them. We spent the first day getting our bearings (as you do) and merely went for a stroll in the park. Actually, a hike through seven of the main parks – Sofia is full of them. We clocked up ten miles. A cool, crisp winter's day with all the usual city birds but also quite a number of colourful Jays, easily spotted in the bare branches of the trees. We even had a glimpse of a Red Squirrel and I just managed a quick snap before he disappeared around the bole of the tree.

The city is dominated by the 7,520 foot Mount Vitosha, which we visited on our second day. Although wolves, martens, foxes and deer inhabit its forested slopes, we had to content ourselves with fungi, mosses and lichens. Recent research has revealed that there is an incredibly wide diversity of these in the comparatively small area that the massif occupies. 500 species of fungi, 326 species of moss and 200 species of lichen. These are some of them, but don't ask me what species they are. Despite the lack of wildlife it was a beautiful walk with plenty of little shelters to stop and soak up the atmosphere. Highly recommended. 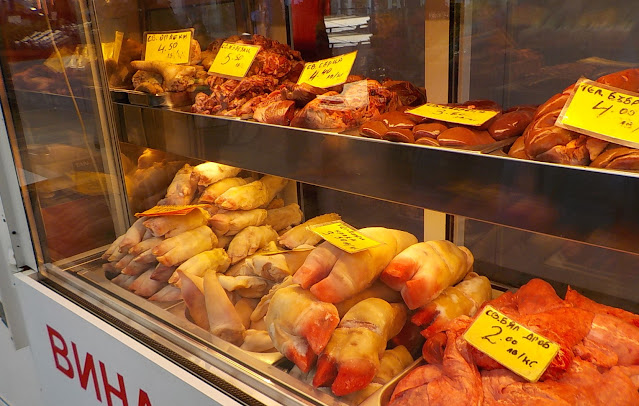 And now to the subject of Bulgarian food. You'll either love it or loathe it. When I came back to the UK, I was surprised at the lack of offal on the supermarket shelves. Not even that midweek staple, liver. Not so in Bulgaria. Not only liver but kidneys, hearts, tripe, lights and pig's trotters were widely available. We found a superb local restaurant by the simple expedient of going into a small, non-touristy bar, and engaging the landlord and clientèle on the subject of the best place to eat. We dined there on three occasions, sampling such delights as pig knuckle stew and sautéed lamb brains (which taste surprisingly like fish and are served with a wedge of lemon). As I say, you'll either love it or loathe it. More conventional fare is also available for the gastronomically unadventurous. 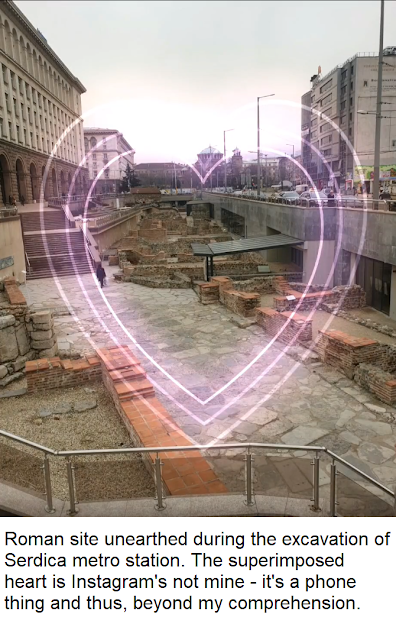 Day three and we decided to investigate the history of this, the fourteenth largest city in the European Union, which has been inhabited for the last nine thousand years. The recorded history begins with the Romans in 29BC. They were succeeded by the Huns, Visigoths, Avars (who?) and Slavs before Khan Krum incorporated it into the Bulgarian Empire in 809. (Now you know where JK Rowling got the name of her Bulgarian quidditch captain!) The Ottomans had it from the 14th to the 19th century and in the early 20th century it was a monarchy under Tsar Ferdinand who was related to our Queen Victoria (as were most of the European royals at that time). WWII saw it ally itself with Russia which continued until 1989 when the Bulgarian Communist Party began to drift away from Russia, eventually joining NATO in 2004 and the EU in 2007. That's a quick potted history as I understand it.

And finally, a lighter excursion to the Museum of Illusions which was absolutely fascinating and totally defied the senses at times. Exhibits ranged from the sublime, such as the shadow skyline in the centre... to the ridiculous. As demonstrated by the carefully arranged mirrors which allowed Ishbel and I to merge into one with frightening results. Thanks to the museum staff for taking the pictures.

Having disentangled my clothes from a spaghetti nest of cables when I got home, here are a couple of items I'm thinking of getting for my next trip abroad. And if you fancy a trip to Bulgaria this year, I can recommend the Berlitz Travel Guide. Click on the pics for more info.