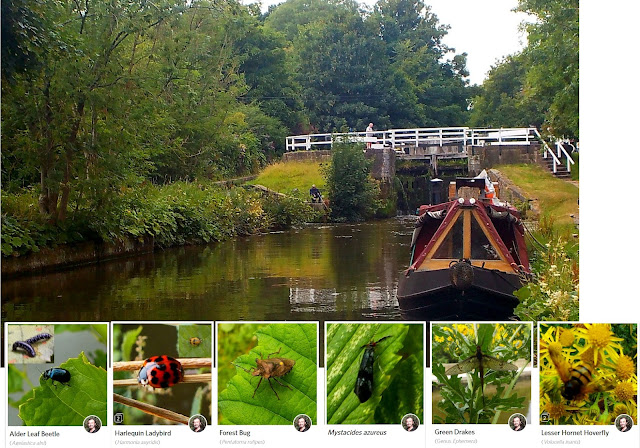 Last week I was bemoaning the lack of insects on the Ulverston canal. So, this week I thought we'd go on a minibeast safari alongside another couple of canals to see if they are fairing any better. We're heading south (for reasons that will become apparent later) and starting off at Saltaire, a UNESCO World Heritage Site, where the Leeds-Liverpool canal runs alongside the river Aire. It's a beautiful walk (wheelchair accessible) and, although not exactly buzzing with insects, there seems to be a greater diversity here. The beetles (Coleoptera) are represented by the Alder Leaf Beetle, both adult and larvae, and the invasive Harlequin Ladybird, adult and pupa (see Witches, Woods and Wild Garlic). We have a Forest Bug making an appearance for the Hemiptera, a Caddis Fly, Mystacides azureus, (Trichoptera) and a Green Drake Mayfly for the Ephemerata. A Lesser Hornet Hoverfly is just one of the many species of True Flies (Diptera) that are buzzing about. That's five different orders of insects, but as I say, their numbers are not great. Next stop is the Rochdale canal at Hebden Bridge. This, unfortunately seems as poor as the Ulverston canal: two beetle species – the 2 spot ladybird and a Figwort Weevil; and a Buff-tailed Bumblebee. I know I keep banging on about insects, but they're beautiful little creatures when you get to know them and vitally important to our survival. We just need to learn to work alongside them much better than we do at present. Book plug (obviously) but The Quick Guide toCreepy-Crawlies is a great introduction to their world for anyone who'd like to know a bit more about our miniature allies. 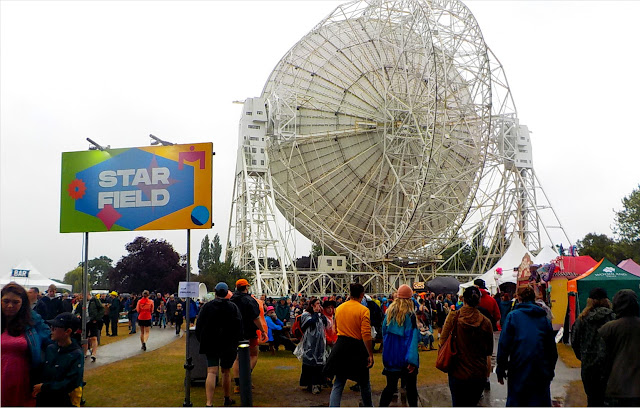 And now we're heading right out of my comfort zone. I am 64 years old and I've never been to a festival before. Being somewhat misanthropic towards the human race in general, I tend to avoid mass swarms of humanity like the plague. However, Ishbel's daughter is a great admirer of the Icelandic singer, Bjork, and said diva is headlining tonight. Blue Dot however, is a science based festival, held annually at Jodrell bank and dedicated to astronomy and cosmology so I take refuge in a tent where Jim Al-Khalili is expounding upon the uses of the scientific method in everyday life. There are bands playing all over the show, and from the middle of the field you can hear them all simultaneously, which is somewhat confusing but saves time. By far the best of them are Henge, totally mad and (possibly literally) from another planet. Food stalls from every nation are really getting into the theme of things by charging astronomical prices, but we should be able to afford a pie & chips and a beer if we remortgage. And so the evening comes to an end and Bjork appears, for some reason dressed as a Gypsy Moth caterpillar. Bjork's music is not immediate, but rather grows on you, albeit at the speed of lichen. The Hallé Orchestra, who are backing her, are magnificent as always, even when it comes to the challenging techno finale. 16 beats to the bar when bowing a double bass takes a bit of doing. 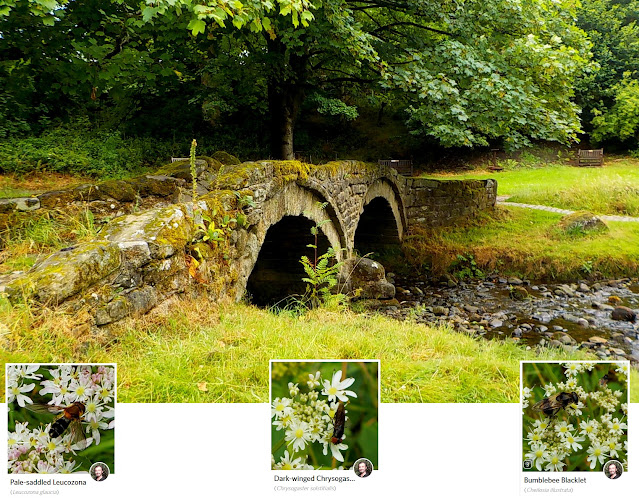 Back to a quieter pace of life now, with a short stop to take Mattie for a walk at Wycoller, on the way back to Cumbria. No canal here, but a small brook runs through the village. Again, not much in the way of insects, but many species of True Flies are attracted to the Hogweed. Apart from various Blowflies and House Flies, there's a Pale-saddled Leucozona, a type of Hoverfly who's larvae eat aphids. There's a Dark-winged Chrysogaster, another type of Hoverfly who's larvae live in pond mud. And finally a Bumblebee Blacklet, yet another Hoverfly who's larvae burrow into the stems of the Hogweed and also, unfortunately, parsnips.

I hope you've enjoyed our little trip down to West Yorkshire and Cheshire and, if you're still in the mood for a little light reading, I'm now onto the fourth episode of Steve's History of Things.