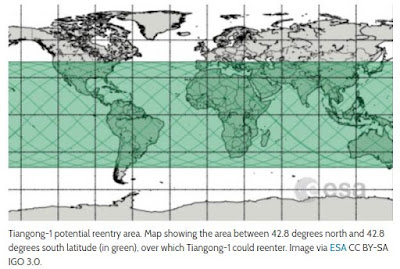 If you are out and about nature watching this afternoon anywhere within 43 degrees of the equator (which includes most of the inhabited world south of the Himalayas, Pyrenees or Appalachians depending upon the continent from which you are observing) you may see a strange orange glow in the sky. For sometime today the Chinese space station, Tiangong-1, will make its fiery descent back to Earth. If you are in England and see a strange orange glow in the sky then that will probably be the sun, an astronomical object that older readers may dimly recall. 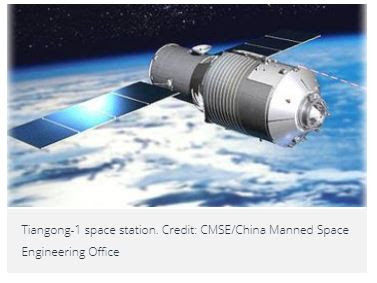 Launched in 2011, Tiangong-1 did sterling service until March 2016 when it ceased to function and ground teams lost control of the thing. This means that they cannot fire the engines to make a controlled re-entry and merely pollute the Pacific Ocean with it but have to allow it to make its own inscrutable way back to the home planet. Fortunately most of it will burn up on its way down which is just as well as it is the size of a bus. The key phrase here of course is "most of it"; there is still a likelihood that chunks of fiery space debris could land in a populated area. 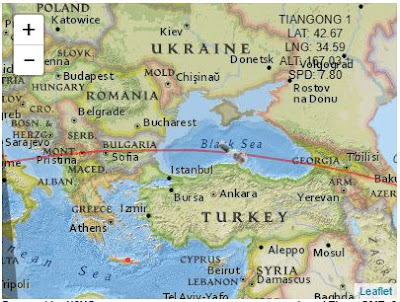 As I write this at 05.50 UTC (07.50 Crete Local Time) it is passing west to east over the Black Sea at an altitude of 167km. An hour or so ago it was off the north coast of New Zealand. A sentence later and it is over Afghanistan - it's coming in quickly but losing altitude slowly. If you want to track its descent in real time you can do so here.

There is an old Chinese curse: "May you live in interesting times" - it certainly promises to be an interesting afternoon. 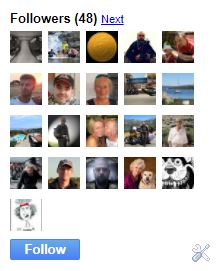 Meanwhile observant followers of the #CreteNature blog will have noticed that this is not the normal day of publication, nor for that matter, the usual subject matter. Truth is that life in the Daniels household is undergoing a little medical turbulence at the moment which means that future posts are likely to be as erratic as Tiangong-1's descent for a while. It also means that I probably won't be able to remind you all when a new post is published. However, if you click the 'Follow' button in the upper right panel (as illustrated here) then you will get a friendly little email notification each time a new post is published. You can also follow me on Facebook via my Naturalists Group or on Twitter@cretenaturalist.

A big thank you to the excellent Deborah Byrd at EarthSky who provided most of the information for this post either directly through her daily blog or via a very useful set of links. Thanks Deb.
at April 01, 2018
Email ThisBlogThis!Share to TwitterShare to FacebookShare to Pinterest
Labels: Crete, Tiangong-1