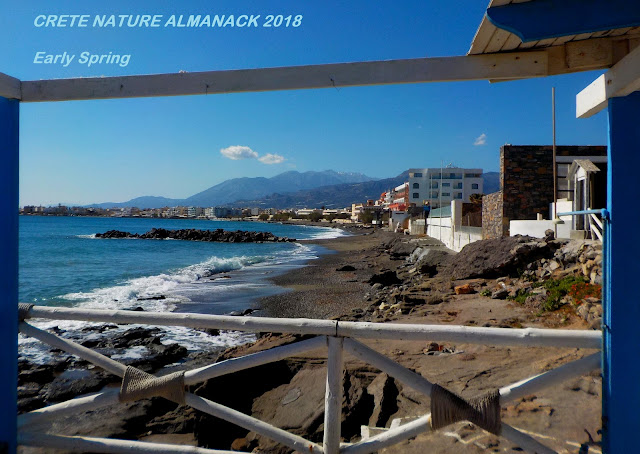 Today, March 20th, sees the arrival of the Spring Equinox in the northern hemisphere (or the Autumn Equinox in the southern) where the daylight hours equal the night time hours; twelve of each. Here in Crete the weather is starting to warm up, hitting the 30C mark on some days and nothing could be pleasanter than to bask on the terrace of the Sxedia (The Raft), looking out over Ierapetra with the last vestiges of snow on the Dhikti Mountains in the background. It is also a lovely place for us to sit and chat about the things to look out for in early Spring so pull up a chair and we'll begin. 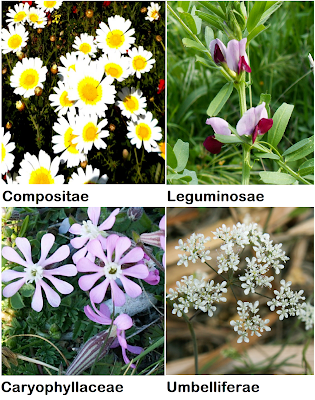 There are so many now that it is difficult to pick out any particular one but how do you know what they all are? Rushing for a field guide is all very well so long as you know to which family they belong (after all there are 93 to choose from here on Crete). To help you out a bit more than 25% of Cretan flowers fall into just four families and here's a quick guide to recognising them. Compositae (or Asteraceae): Represented by daisies, dandelions and thistles, the head of each plant is composed of many small florets often arranged in a central disk with a ray of dissimilar florets surrounding them. Leguminosae (or Fabaceae): Represented by peas, clovers and lupins, their flowers have a distinctive shape (although in the case of clovers you may need a hand lens to discern that each flower head is composed of many tiny flowers) and they all have fruits (legumes) that split into two lengthways like a pea pod. Caryophyllaceae: Represented by pinks and catchflies, these are flowers with 5 petals, very often subdivided and they have tough, coarse stems and leaves. Check out the mallow family (Malvaceae) too as they have very similar characteristics but there are fewer of them. Umbelliferae (Apiaceae): Represented by carrots, fennel and parsley these have very distinctive flower heads like the spokes of an umbrella. For a full illustrated guide to all the families see Steve Lenton's excellent on line guide Cretan Flora.

With all these flowers about it is no surprise that the insects are up and about too and it's a great time to watch what they are doing. Are they young grubs crawling around trying to get as much food inside them as soon as possible? What are they eating? (Often a clue to species identification). Or are they nymphs, often very different to their adult colouration? Worth keeping if you can feed them to watch their development. Maybe they are adults, mating or laying their eggs. Which plant are they laying their eggs upon? There is so much more to entomology than simply attaching a label to a specimen. Insect lives are fascinating.

The Spring migration is now beginning for many birds so look out for species flying north from subSaharan Africa to mainland Europe. We also have many resident birds here on Crete and as the insect levels increase, for many it is the nesting season. Check out what they are collecting by way of nesting materials: twigs, grasses, mosses, lichens, mud, spittle, wool. All are grist to the mill for different bird species. Our ravens for instance will be using an interlaced arrangement of sticks, lined with grass and wool  up on a rock ledge (if they're ready yet - follow the blog to see how they're getting on) whereas the chaffinch builds a very neat round nest of moss, lichens, wool, feathers and hair felted together in a bush or in the fork of a tree. On the other hand the skylark makes a very simple grass nest directly upon the ground. (The nest in the photo had fallen to the ground – obviously you don't go plucking them from the trees and bushes. The birdies might get a bit miffed!)

Hares, mice, weasels, martens and badgers continue to be shy and elusive but there's a beter chance of seeing them now as they too become emboldened by the urge to mate. Hedgehogs too will have emerged from hibernation. In the herpetological world listen for the frog and toad chorus after dusk and try to pick out the rising brrrrip of the green Toad and the manic chirruping of the European Tree Frog. 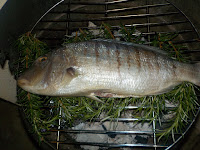 The other great thing about spring in Crete is that it is the start of the barbecue season. I celebrated last night with slow cooked bream over rosemary with cheesy beans and baked potato. If you want a rundown on preparation, timings etc. I'm experimenting with a new idea for a cook book which you can see here.

See you next week for more wanderings in the hills and valleys of east Crete and we'll see how much of the above that we can observe. Happy Springtime.