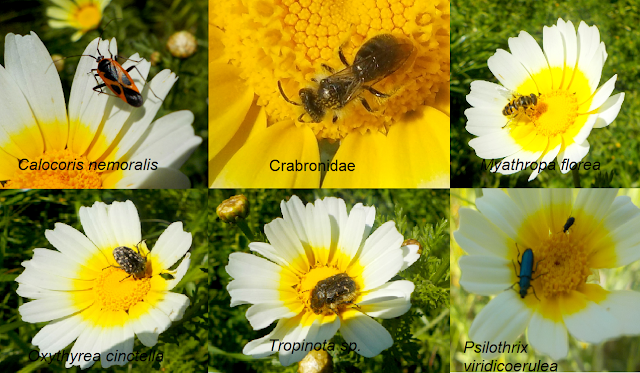 Spring is here at last. I don't know about you but it seems a lot longer than thirteen weeks since the winter solstice. One thing about spring is that life is so abundant that you don't have to go far to look for it. Come with me into the olive grove next door and I'll show you. Absolutely bursting with blooms: Poppies, Pimpernels, Mallow and Medicago, Shepherd's Needles and Vetch. I can see at least fourteen different flowers from here but the one I'm particularly interested in today is the ubiquitous Garland Daisy as they really attract the insects. Look, we've got a Mirid Bug, a little black Crabronid wasp, a hoverfly and three different beetles. Not a bad little haul. 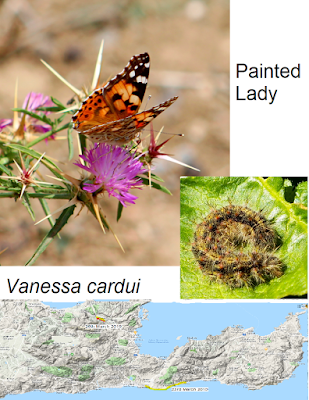 Now, I need your help. As I was coming back from Ierapetra on Saturday (March 23rd) I stopped off at the beach to have a look at the pink carpet of Catchfly that adorned the upper levels and I found myself surrounded by hundreds of Painted Ladies. These amazing little butterflies migrate from Africa to northern Europe but not usually in such quantity. I have had reports in of 'huge numbers counted over Israel and Cyprus' and also Rhodes and Nisyros. Locally they have been spotted from Ierapetra to Agios Fotia but not as far as Makry Gialos. So, keep your eyes peeled and please let me know of any sightings of large numbers either here on Crete or elsewhere in Europe as I am part of a project that has been monitoring their migration. * Also, in the weeks to come, look out for large numbers of their caterpillars. They are not fussy eaters and have been recorded on over 300 different plants so they may turn up anywhere. (Please use the comments box below – thanks). 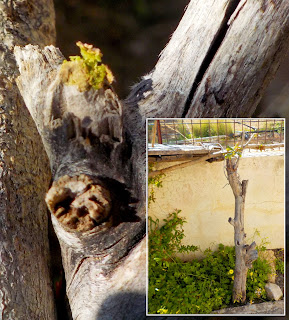 Next, a bit of amazing nature. Come into the garden. About three years ago my Loquat tree gave up the ghost, it had rotted away at the base and I found it lying forlornly on the ground. I decided to leave it there as a natural part of the ecosystem. This year, however, I moved the bird table and needed a prop so the Loquat stump was pressed into service. As you can see, I didn't dig it into the earth, I just sort of wedged it in place. So, you can imagine my surprise when I found it sprouting new leaves. That is one incredible recovery. 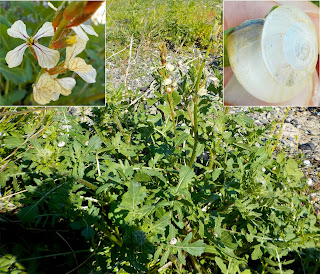 Meanwhile, I have a rocket in my pocket. Or to be more precise a few salad Rocket leaves (or Arugula in American English); Eruca sativa for the botanically minded. It has a lovely, peppery taste and I tend to pick leaves from the centre of the stem. They'll need a good wash as the Heath Snails also seem to have a liking for it and rocket can be added to almost any savoury dish that wants pepping up but mostly it is added to salads. Being English, for many years I thought that salad was chopped lettuce, tomato and cucumber and spring onion if you were feeling adventurous (in much the same way as the complete book of English meat sauces was to be found on the back of a packet of Bisto gravy). I also thought that salads had to be eaten cold by law. If you pop over to Steve's Wild Kitchen you can join me in a barbecued pork chop, baked potato with a rather tasty warm mushroom, orange and rocket salad. 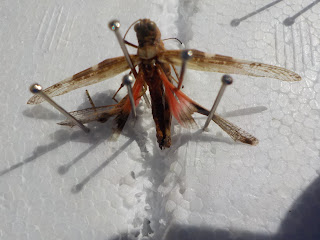 I've been spending a little time with grasshoppers recently and, although I'm not a great proponent of pinning insects merely to decorate the walls, occasionally one does need to get up close and personal which can be a bit difficult when the object of interest jumps ten feet as soon as you get within spitting distance. Finding that setting boards cost anything between five and twenty five quid (plus VAT and delivery) I decided to make my own. All you need is a bit of polystyrene packaging at least 5mm thick and a Stanley knife. Cut a V shaped groove about 4mm wide by 4mm deep and there you have it. It may not look very professional (but there again, neither does my pinning) but it's perfectly adequate. This, incidentally, is a Red-winged Grasshopper, Oedipoda germanica.

Thanks to Ian Burry who informs me that he saw a considerable number of Painted Ladies In Neapoli yesterday (26th March) heading up the valley towards Selinari.