When Nature Fights Back

I thought we’d go up to the disturbed ground today. No, it’s not suffering from deep psychological problems although it may well have been when it was flattened and cleared of all vegetation for no apparent reason. There is nothing a Cretan likes more than earth moving equipment. Give him a bulldozer and he’ll move mountains for you, often quite literally. Since then this piece of ground has been left untouched and it has been fascinating to watch nature fighting its way back. First the plants arrived, their seeds blown in on the wind, then the insects came to pollinate the flowers, attracted by their colours and scents and they were followed by the insect predators such as birds. The birds dropped seeds of other plants and a whole new layer of the ecosystem developed. All of this has taken the best part of eight years to unfold and what we’re particularly looking for today is evidence of small mammals. So let’s trek on up the hill and see what we can find.

We actually have three ecosystems in one here. The foreground is somewhat dry despite there being an overgrown ditch at the base of the cliff to our right. This is because a drainage pipe was installed to carry the water away, the line of which is marked by that line of Tamarisk trees you can see in the middle distance. Beyond the trees the ground is much damper and dominated by rushes and reeds so we have dry, wet and damp all in one small area.


We’ll start in the dry zone and see what’s about. Two or three grass species; plenty of wood sorrel; fennel and thyme; some mallow and here, nestling in the grass our first flowering plant, the delightfully named Friar’s Cowl.  This is a winter flowering plant, typically between November and March in this area. This is a member of the Araceae family (flowers with a central spike called a spadix enclosed in a specialised leaf called a spathe). In practical terms if you see a plant with a long, sticky-out bit projecting from the middle it’s a member of the Araceae family. Friar’s Cowl is pollinated by insects and their berries are distributed by birds and other animals so just by it being here we know that our ecosystem is at least visited, if not inhabited, by those animal groups.


Aha – a log! I can never resist turning over a log – you never know what may be lurking beneath. In this case a Green Huntsman Spider. Huntsman spiders can often be found under logs and in cracks and crevices as they do not build webs to trap their prey. They use their speed to hunt down insects and other invertebrates which they inject with venom. (Not powerful enough to harm us fortunately. In fact Crete has no venomous spiders or snakes capable of doing a healthy human any serious damage.) Also while we’ve got her here lets put her in the photography tin and take a look at her eyes, all eight of them. They are arranged in two rows of four, a defining characteristic of the Sparassidae family. There you go, back under your log. Sorry to have disturbed you. 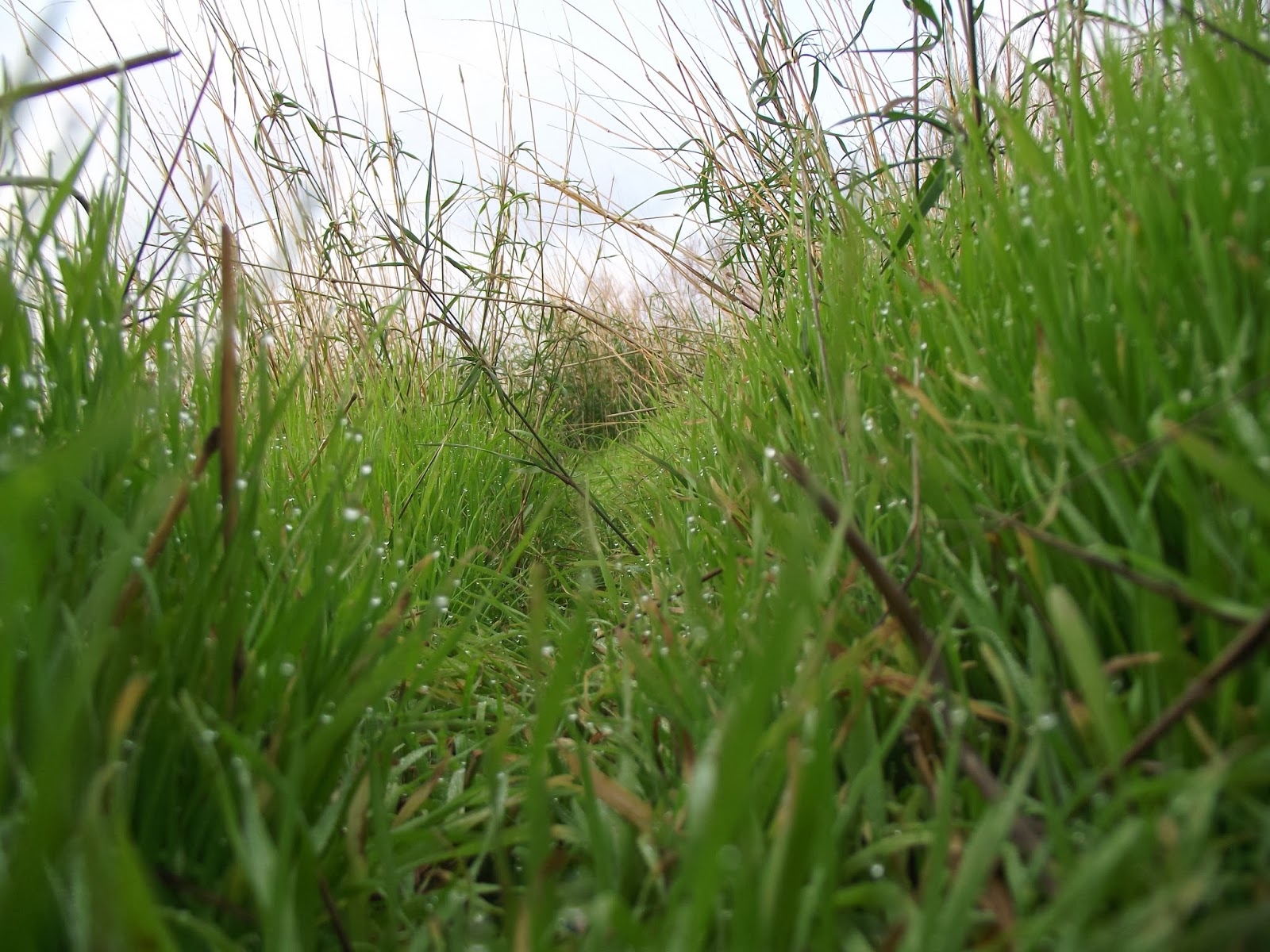 As we approach the Tamarisk trees I find something I’ve been looking for. See the way that the grass is parted here? This is the first evidence I’ve found that we have small mammals up here. These runs are a result of the animals taking a regular route on their nocturnal hunting trips. Following it through the trees it continues through the rushes with side tracks leading down into the olive grove and up to the rocky cliff where there are plenty of holes for den sites. I’m looking for scats or droppings as then we may be able to discover what has made these runs but unfortunately there are none to be seen. If only I had a trail cam.

Following the run as it loops back round the damp lands (which seem particularly quiet this morning), back through the trees and into the dry area again, a sudden movement catches my eye. It takes a while for the eyes to focus. Can you spot it? There is a grasshopper right in the centre of the picture. 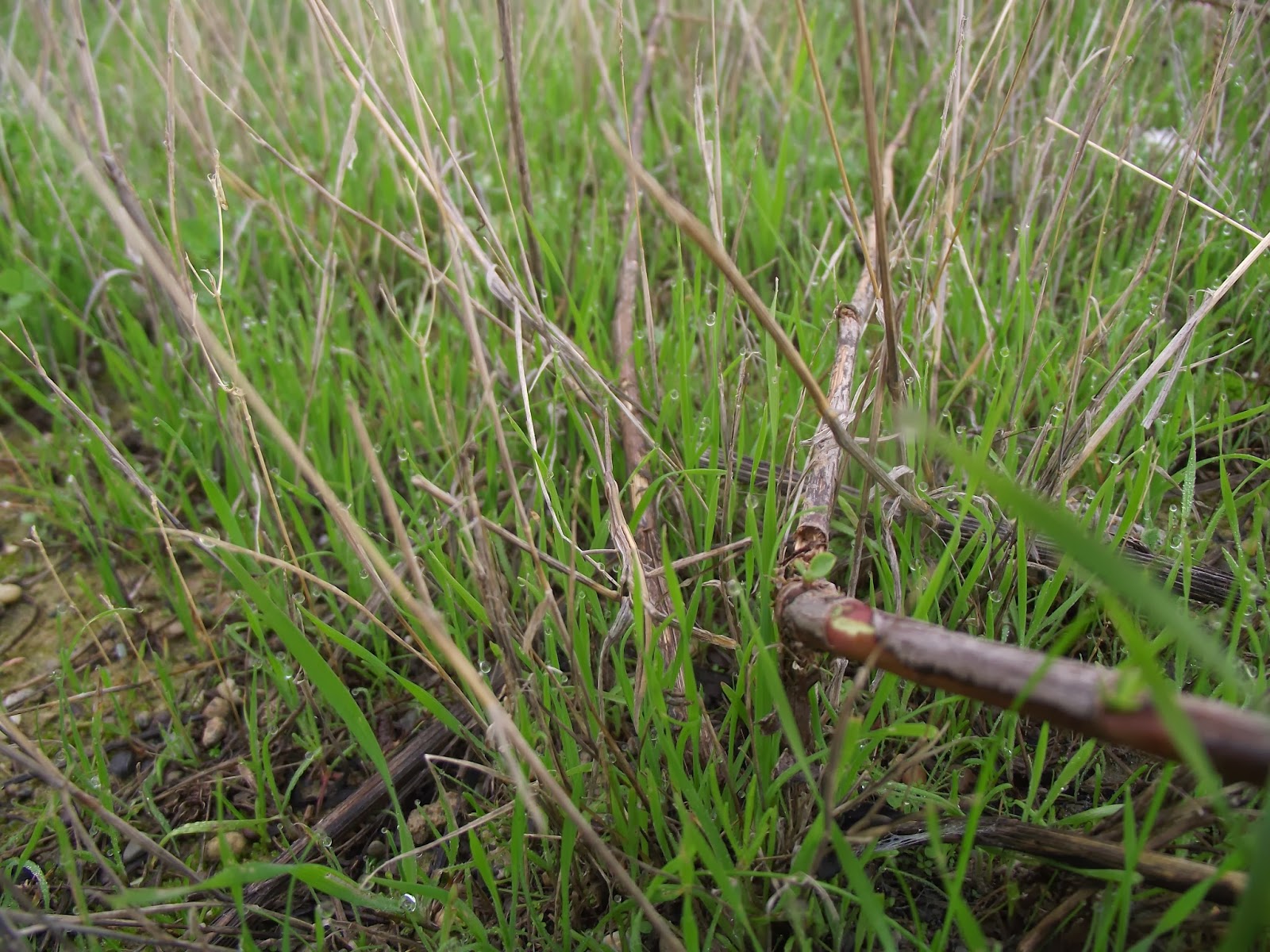 This is the Mediterranean Slant-faced Grasshopper, an absolute master of disguise. This is an example of visual crypsis in the animal world: the ability to blend in with your surroundings either to ambush prey or avoid predators. I have several pictures of these and in winter and summer, when there is plenty of dead grass in which to hide they are always this creamy brown colour. In spring however, when the grasses are lush and green, so too is the grasshopper.


Before we return lets have a quick look at the ditch. I see that it is now totally choked with bulrushes (or reed mace or cat tail depending on which part of the world you are from). Incidentally this is why we have two part Latin names for everything, this is Typha angustifolia, no matter which part of the world you are from or which language you speak. The fascinating thing about these is the smallness of their individual seeds – you need to put them under a microscope to see them properly. This doesn’t stop them from making one helluva mess if you bring them indoors as a flower decoration as I did one year. I came down in the morning to find they’d set seed and there were little bundles of fluffy seed heads everywhere. I was still finding them six months later tucked down the back of the sofa and other such out of the way places.

That about wraps it up for the disturbed ground for today but I expect we’ll revisit it later in the year when it’s feeling a little more vibrant. Meanwhile I’ll leave you with some pictures of things we haven’t had time to discuss in the blog all of which can be found on our facebook page: Steve's Naturalists' Group where you can share your own pictures and thoughts from your part of the world. Until next week – good hunting.