Rockin’ all over the Shore 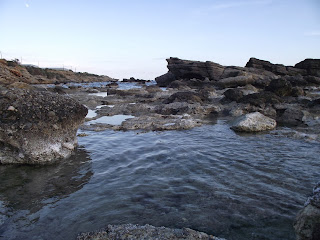 So far we’ve been out on the cliffs and up through the olive groves so this week I thought we’d take a trip down to the harbour and see what we can find among the rocks there.
This being the middle of January all of the fishing boats have been taken in for the winter and the harbour is deserted. We’ll make our way to the far end where large chunks of rock lay sprawled about in abandoned attitudes, their faces turned to the south like monolithic sunbathers. Take a closer look at the rock on our left: it is low tide at the moment but you can clearly see the high water mark where the rock darkens. The Mediterranean is a small sea and has a tidal range of only about one metre. 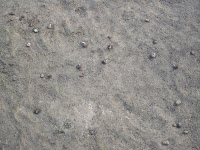 In the smaller pools where the water is quieter the first thing that we notice is that the floor is covered with Top shells, Rock Ceriths and other small molluscs. These are the marine relatives of the slugs and snails that we find in the garden and like their terrestrial counterparts are herbivorous, living off the algae that coat the rocks.


But not all is quite as it seems. A whelk has suddenly sprouted legs and started crawling across the bottom of the pool in a most un-whelk-like way. The original occupant of the shell is no longer in residence and has been taken over by a Hermit Crab. Unlike other crabs the hermit has a soft, unprotected abdomen and has to roam the sea bed looking for ever larger abandoned shells to inhabit as it grows. Not only do we have a crab in a whelk shell but on the outside we seem to have little snails with their tops sawn off. Despite their appearance they are not molluscs at all as they do not feed by using a tongue-like foot as slugs and snails do. These are Polychaete Tubeworms, related to the garden earthworm.  They sit and wait for the food to come them.


As we are prodding about at the bottom of the pool I notice that we are being observed.  Zipping around and then suddenly hanging motionless in the water is a small translucent Rock Pool Prawn. Pass me the net and we’ll take a closer look. Like crabs, prawns are crustaceans and they really are quite beautiful close up. They too have land based relatives in the garden; woodlice and pill bugs. Incidentally there is no difference between a shrimp and a prawn scientifically speaking. In most English speaking nations of the world a shrimp is regarded as a small prawn. In the U.S.A it is the other way about.


The clouds are gathering and the sun is dropping so I’ll just take a sample of some algae to look at under the microscope and then we’ll head back for a pot of Earl Grey tea and crumpets – but hang on a minute, who’s this emerging from under a rock? Would you believe, a Spiny Starfish. (It gets its name from the white spines down its arms). Starfish, which have no garden relatives, have a most peculiar way of eating: they engulf their prey and then, instead of taking it down into their stomach like most other animals they send their stomachs out and digest it outside. Quite revolting really but it gives a whole new twist to al fresco dining.

Having eaten our tea and crumpets in the more conventional manner lets get these algae samples under the microscope and see what’s happening in the world of the very small.
I see that we have more worms. Unlike the earthworm and the polychaete tubeworms we saw earlier these worms are not Annelids (segmented worms) but unsegmented worms called Nematodes. These are probably the most widespread animals on earth and can be found anywhere from the poles to the tropics, on land or sea, and as parasites in plants and other animals including us humans.

Fascinating as these creatures are I’d rather leave you with something more pleasant to look at so here’s a panorama of the harbour.

GO TO NEXT BLOG When Nature Fights Back


If you have any pictures from rocky shores then please share them with us on our facebook page: Steve's Naturalists' Group.
With thanks this week to:
Susannah Anderson  Wnanderin' Weeta's Nature Blog (Canada)
John Mclaren Aquaworld Aquarium