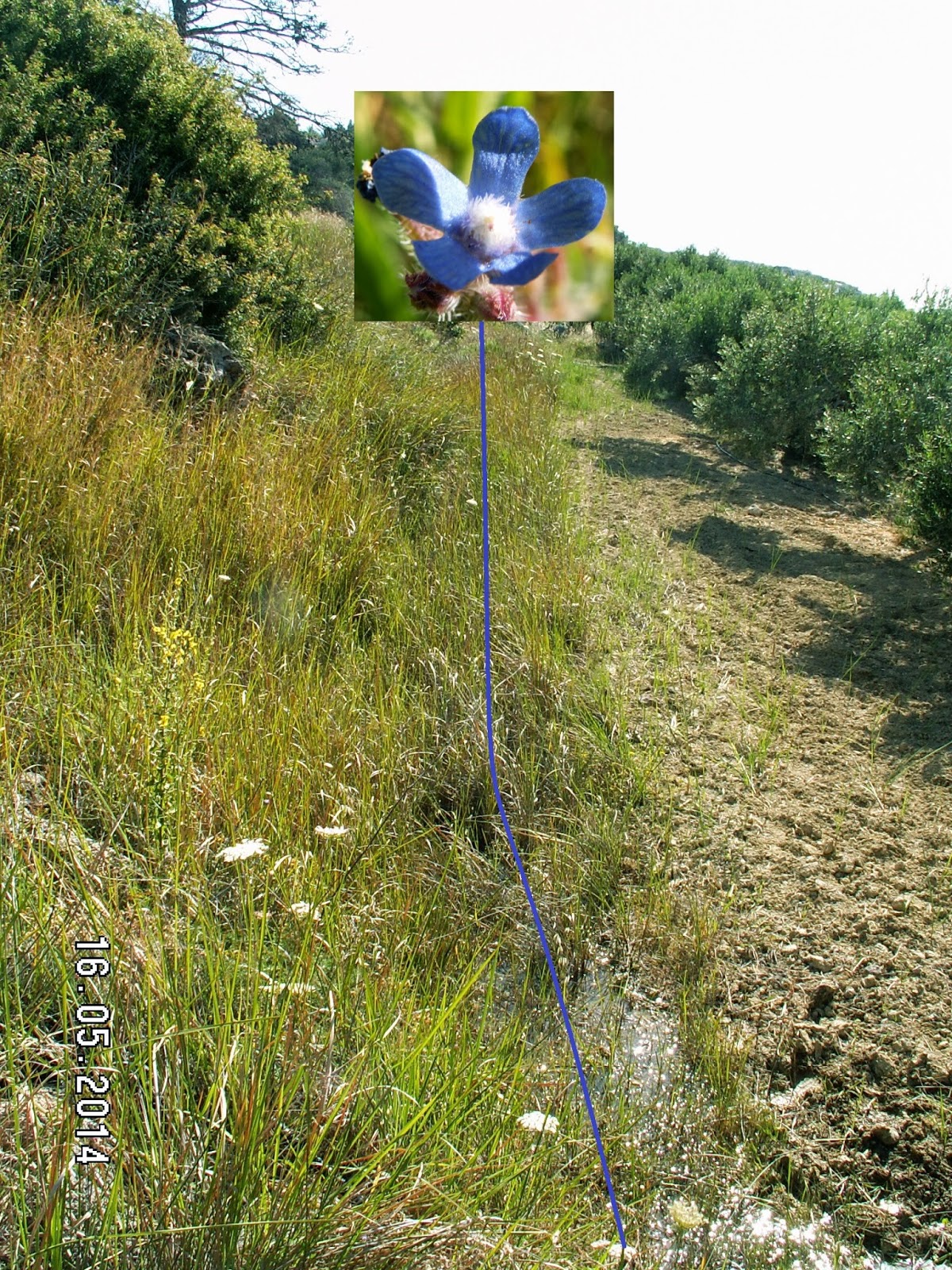 I thought we’d take a short walk today, just up this little stream here at the edge of the olive grove. It’s only sixty or seventy metres and shouldn’t take us more than a day or so. Why so long I hear you ask? Because with the miracles of modern technology in general and macro photography in particular I’m going to shrink us all down to a height of a few inches (or centimetres if you prefer) and turn this stream into a jungle river to explore. We’ll start on that small stone down there at the bottom of the picture and make our way to the Large Blue Alkanet at the top of the picture. Ready? Down we go. 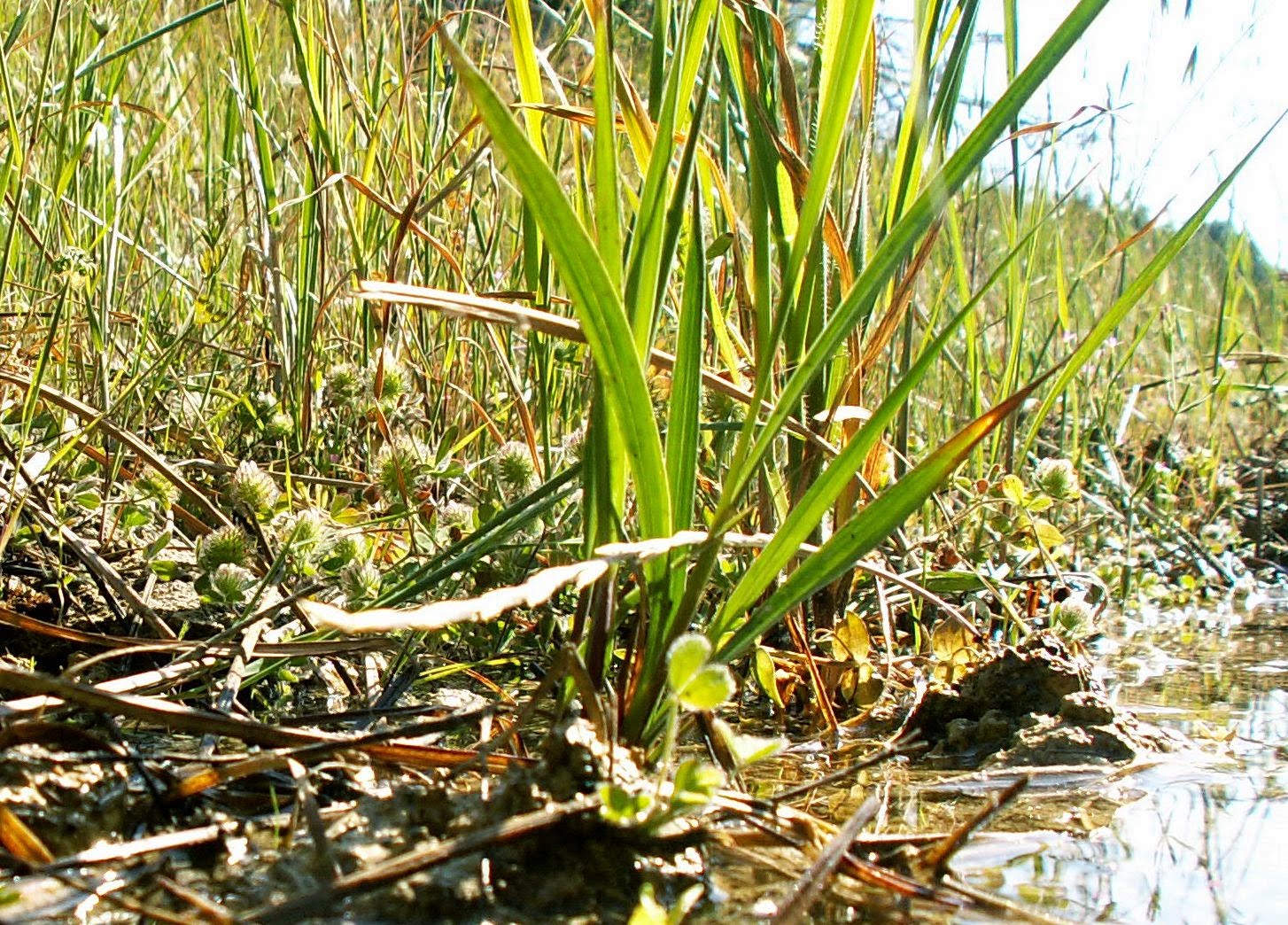 At this level the world takes on a whole new perspective with clover heads the size of medicine balls, beetles bumbling by like puppy dogs and pond skaters just unnervingly big.  We’ll make our way along the left bank and try to get into the shade of the reeds before the sun gets too high. It looks as though we’ll need machetes. 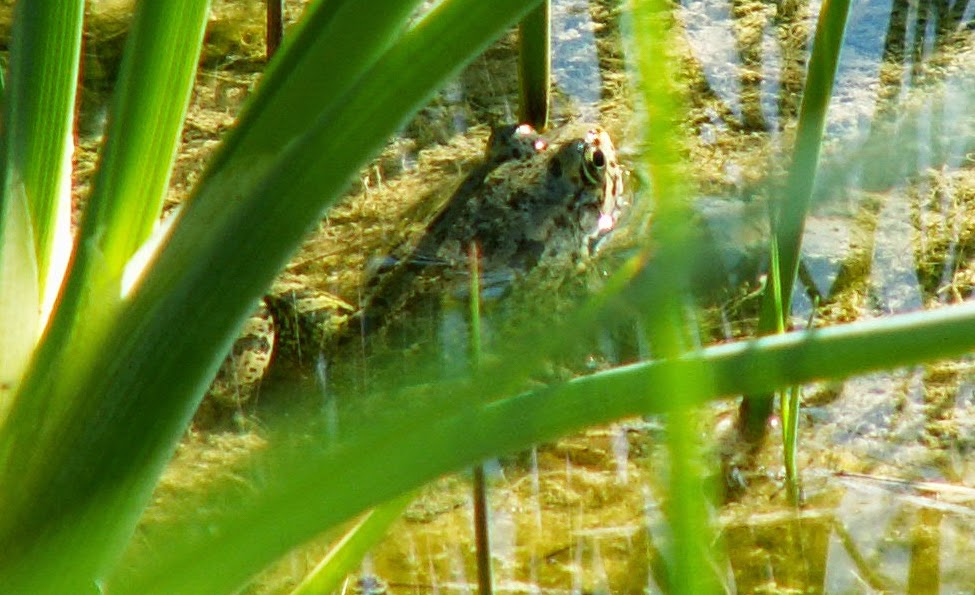 Quietly now and take a look through these leaves. There’s a Cretan Marsh Frog taking in the morning sun blissfully unaware of an approaching threat with the tongue-twisting name of Chytridiomycosis. This is a disease of amphibians that is spreading around the world caused by a pathogen with an even more unpronounceable name which even scientists shorten to Bd for convenience. It has been in Europe since 1997 (Spain) but, as far as I know, it hasn’t reached Crete yet. Hopefully it never will as there is no cure and it can devastate a population within a few months. If you like keeping a few tadpoles at home and watching them grow into frogs (and who doesn’t) it is important not to release them back into the wild any more. These days a frog is for life, not just for springtime.  Anyhow we’ll leave him in peace and push on. 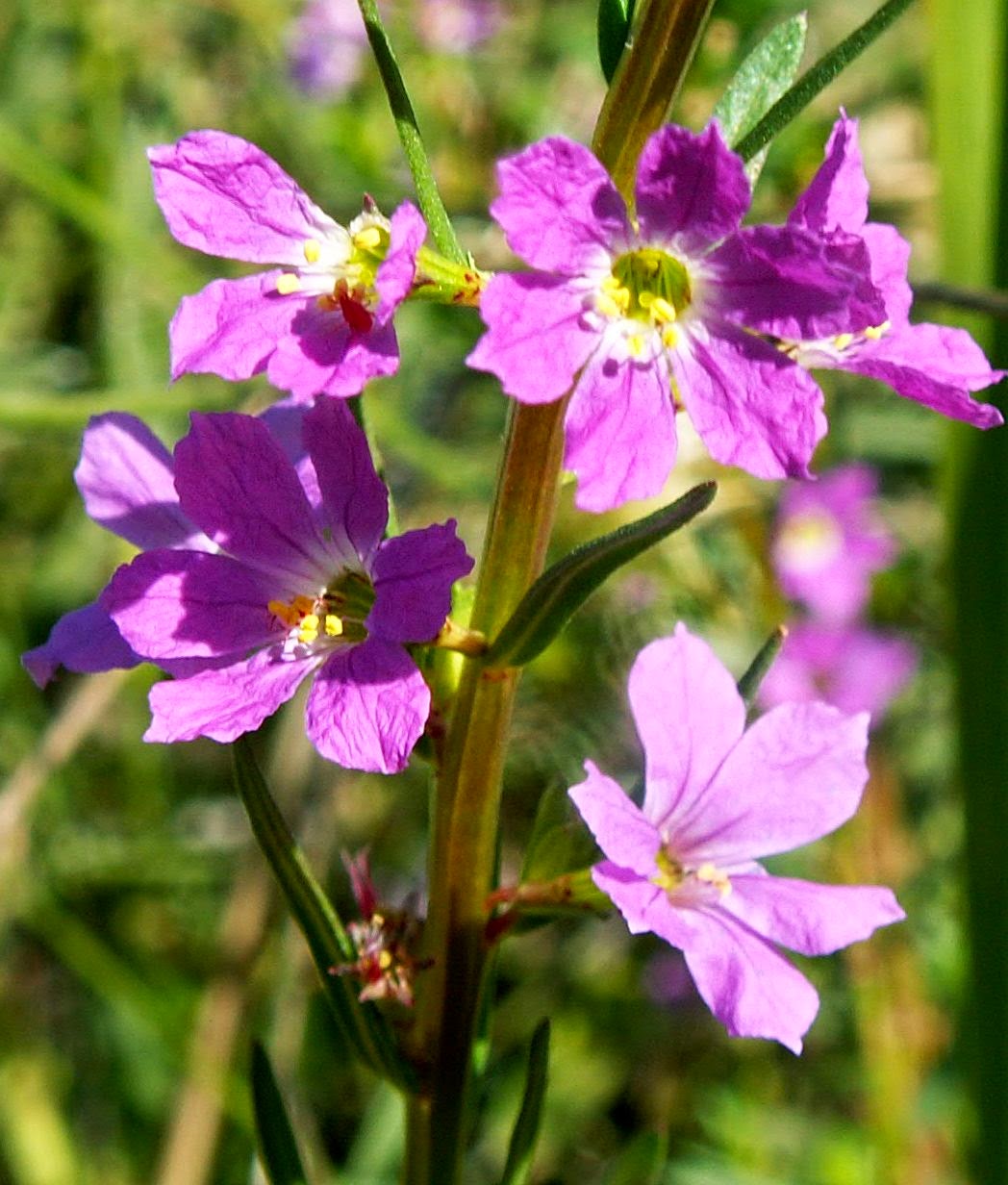 Here’s a beautiful plant that often gets overlooked when we’re wandering about all big and ungainly but is quite magnificent down at this level.  It’s called Creeping Loosestrife or False Grass Poly and it can be found quite commonly in these parts wherever there’s a bit of water or even sufficient dampness. Notice the square stems and stalk-less leaves which are typical of the Loosestrife family.  Good grief, what was that? It looked like a small biplane whizzing by and I think it landed in that backwater over there. Let’s take a look. 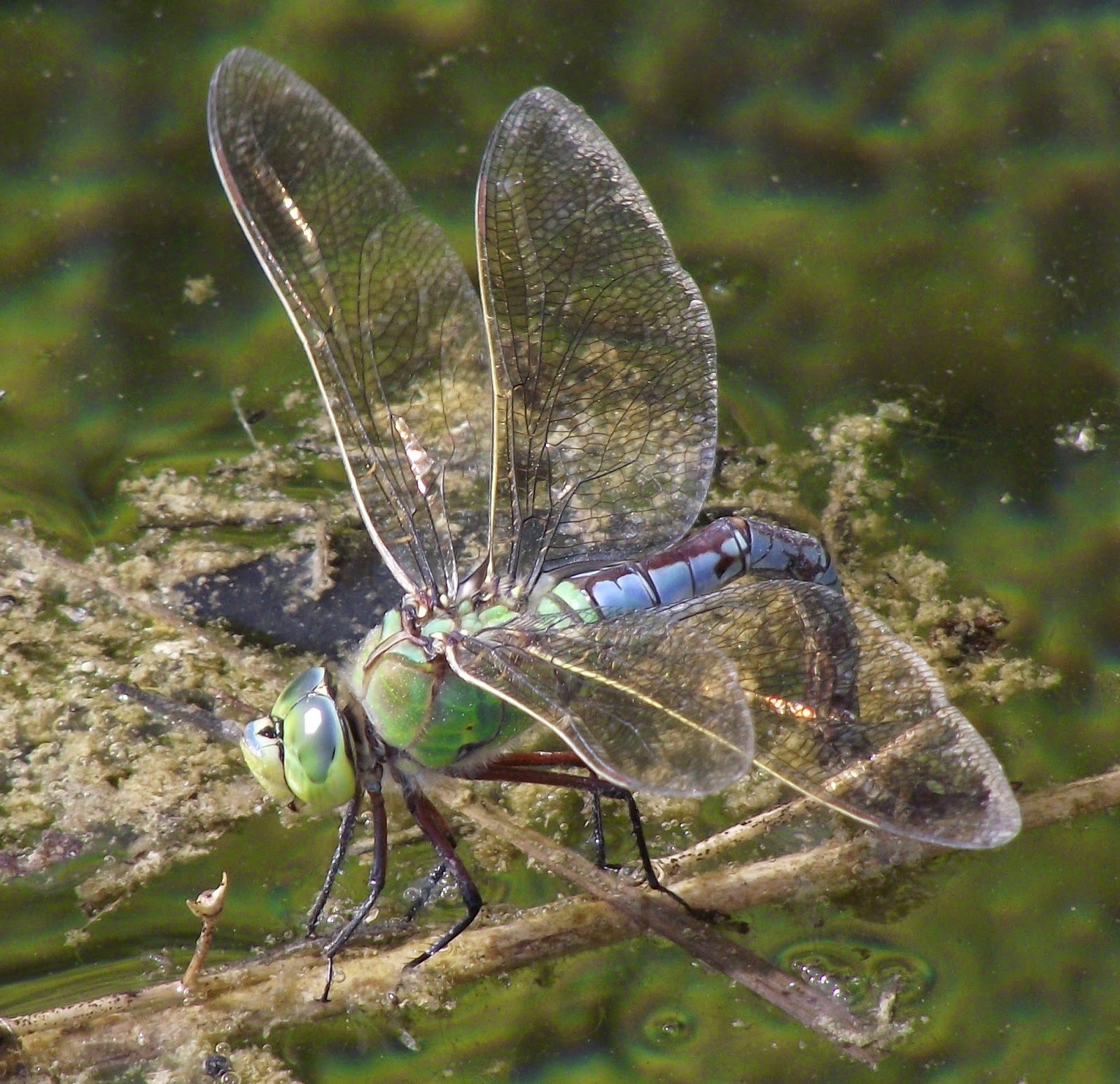 What a magnificent lady. She is an Emperor Dragonfly (or should that be Empress?) and it looks to me as though she has come down here specifically to lay eggs. As you can see, she doesn’t lay her eggs directly into the water but deposits them carefully on a piece of vegetation, in this case a small dead stick of some kind. The eggs will hatch into small aquatic creatures called naiads – named after the ancient Greek water nymphs who used to appear from ponds and streams in the form of naked young ladies solely in order to seduce sleeping shepherds. That’s their story anyway, I don’t suppose the shepherds’ wives believed a word of it. The young dragonfly naiads remain beneath the surface of the water for anything up to five years in some species and they are quite voracious predators. Somewhat curiously they breathe through gills in their backsides which seems a rather odd design. Still, we’ll leave the empress to her egg laying as I can see that we’re rapidly approaching our target plant, the Large Blue Alkanet. 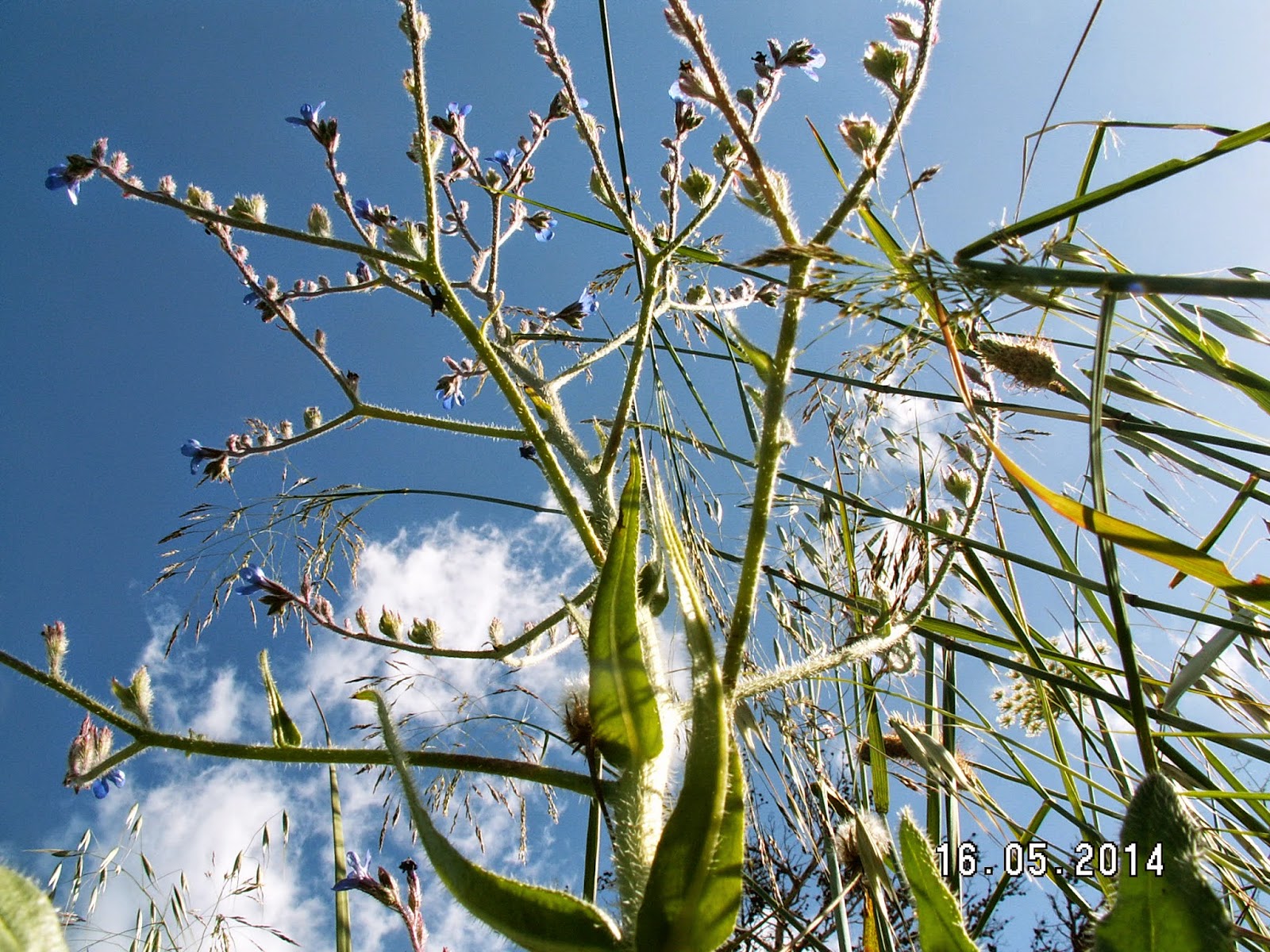 And here it is, quite daunting from this angle isn’t it? It is part of the Borage family of plants (as originally used in the Pimm’s No. 1 Cup) and over here in Crete the tender young stems are cooked and eaten.  I think we’ll make camp here for the night and tomorrow we’ll have a go at scaling the alkanet, (you did remember to bring the ropes I hope?) We’ll see what’s living up among the branches, leaves and flowers before making our way back down the other bank of the stream where I have a little treat in store for you.

To be continued next week…