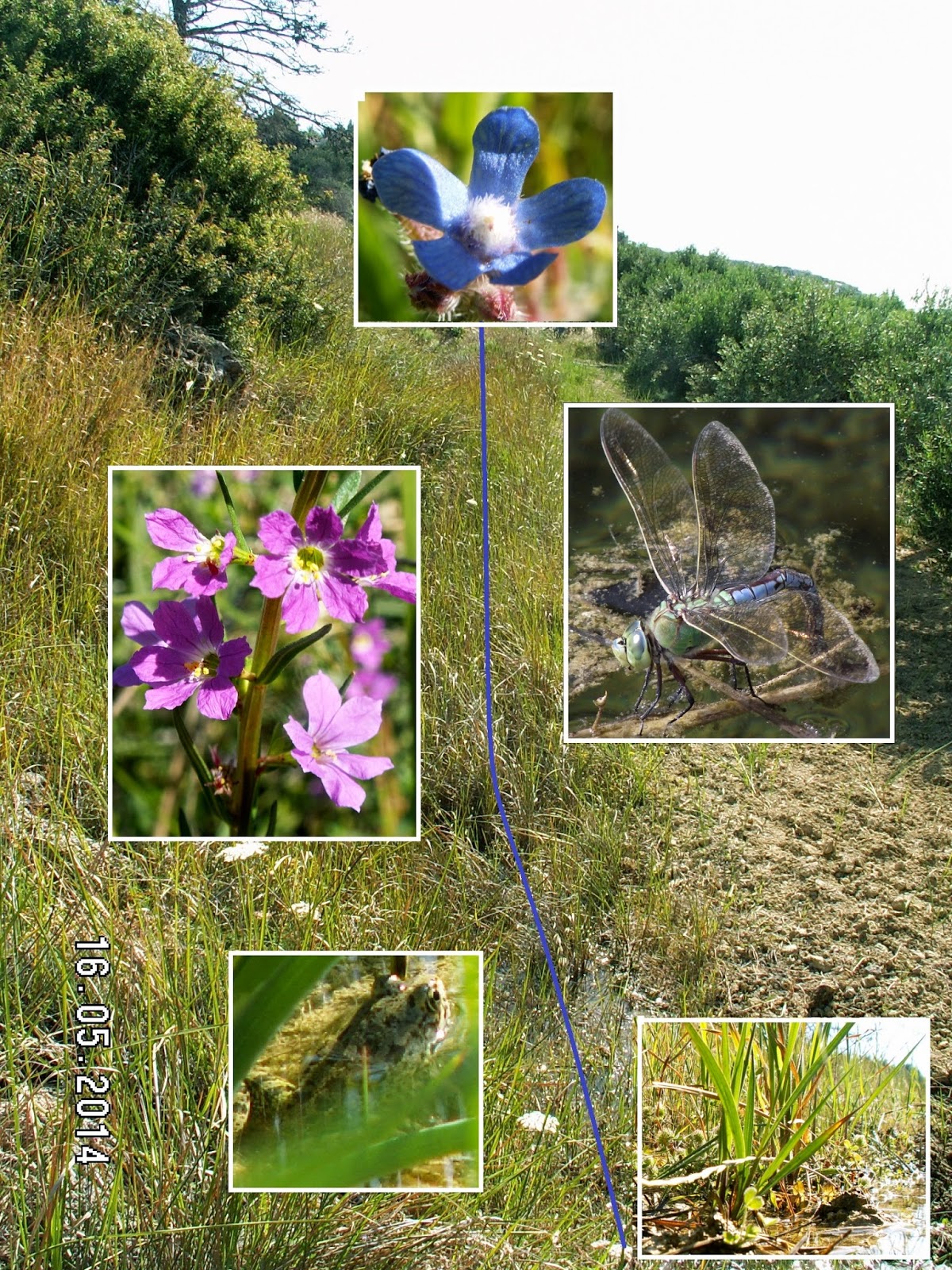 In the first part of the Incredible Shrinking Safari, as you will doubtless recall, I minimised us all to ankle height and we proceeded to hack our way along this small, overgrown stream which had taken on the aspects of the upper reaches of the Amazon. Along the way we met up with a Cretan Marsh Frog taking the morning sun, acquainted ourselves intimately with some Creeping Loosestrife, watched a female Emperor Dragonfly laying her eggs and finally arrived at this Large Blue Alkanet and bemoaned the fact that no-one had remembered to pack the Pimm’s. Today we’re going to start by scaling the Alkanet, now towering above us, to take a closer look at the flowers and see if they’re doing their job of attracting insect pollinators.

Here we are at the top, huffing and blowing a bit (when I shrunk myself it would have been nice to have shrunk my girth a bit but unfortunately it stayed resolutely in proportion) and we’re amongst the opening flower buds. You’ll have noticed the stiff hairs covering the plant on the way up (you probably used them as foot holds – I did) and they extend right up to the flower bud. This is a typical feature of the Borage family and they are made of silicon dioxoide – as used in silicon chips, and calcium carbonate – found in seashells and birds’ eggs. For this reason it is one of those families that are best picked wearing gloves as the hairs can be very irritating.


I see that we have a visitor on that opening bud over there. This is one of the Mirid Bugs going by the name of Deraeocoris schach. I mention this because I don’t believe that it has been recorded on the island before (certainly it is not listed by Fauna Europea).  There is still so much that we don’t know about the world about us – we desperately need more people studying the natural world and less studying the artificial world of finance. Sorry, favourite rant, back to the bug. I’ve mentioned before that one way to tell a bug from a beetle is to look and see how the wing cases are joined together but here’s another way. Bugs suck their food up through a tube called a proboscis which you can see here extending from the front of his head, down underneath the body and into the plant (some do this to other insects). Generally speaking beetles bite: bugs suck. The sun is getting a bit strong now so let us descend once more into the shade at ground level.


Ah, that’s better. We’ll cross the stream here and make our way back down the other bank. The plant cover is a little less dense this side so the going will be easier and also somewhat aromatic. That all pervading aniseed smell filling your nostrils is that of fennel, an ubiquitous herb in these parts with many culinary and medicinal uses which I must remember to discuss with you some time. When you are this size you have to have your eyes about you all the time, not just in the horizontal plane but also in the vertical. However, if you don’t like spiders I suggest that you don’t look up just at this moment. The object hanging above us is an Orb Weaver Spider waiting for lunch to arrive in its web which it will quickly subdue with its venom. Don’t worry, the venom is only strong enough for insects and it won’t come down here anyway; the Orb weavers rely on the sticky web method of prey capture. Incidentally, not all of the web is sticky; most of it is scaffolding attached to three anchor lines. Once the structure of the web is constructed a final spiral of sticky silk is laid on top of the scaffolding.

There is danger from above of course but not from spiders. One of the problems in being the size of a small mammal is that predators, like that Buzzard that has been quartering the olive groves since we descended from the Alkanet, may think that we really are small mammals and invite us for a bite to eat as it were.  If anyone does get picked up I’ll try to restore you to normal size before you get whisked up to lofty heights. Ah, but here’s a creature who looks as though he was not so lucky…


Now I can’t say that he fell prey to a buzzard, there are a few predators that could have taken him on, not least of which being the feral cats that roam the island. It does however seem likely that he did not die of old age. Why? Because the skull is here but the rest of the body isn’t. I’m no forensic scientist but things don’t usually die of their heads suddenly popping off. Could have happened post mortem of course, courtesy of a carrion feeder but cause of death aside what was he?  The general shape of the skull is that of a mustelid;  a group of carnivorous mammals that includes otters, minks and wolverines. Here on Crete we have three representatives of the family all of which are endemic subspecies to the island. They are the Cretan Badger, the Cretan Beech Marten and the Cretan Weasel and you can easily distinguish between their skulls. Look for the ridge running down the centre of the skull. If it is big enough at the rear to pick the skull up between forefinger and thumb then it’s a badger. If you can feel the ridge quite prominently with your finger but it’s not big enough to pick the skull up by then it’s a beech marten.  If there is no discernible ridge (like this one) then it’s a weasel.

But enough of this death and predation, I promised you a treat at the end of the expedition and here it is.  Before I shrunk us all down I crafted a raft of a very small draught and hid it away in the undergrowth here so if you’d all like to help me launch it and climb aboard we’ll leisurely float back to our start point. Some of you brawnier young chaps take the stern; you may have to get off and manhandle us off the sand bars at some points.  One last word of warning: at the end of the trip I’ll restore us all to our correct size and this might make you feel a little bit wobbly. Until next week then, enjoy the trip back and happy hunting.
Click on the picture below to take the boat trip back. 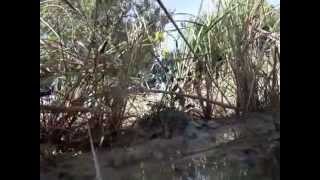