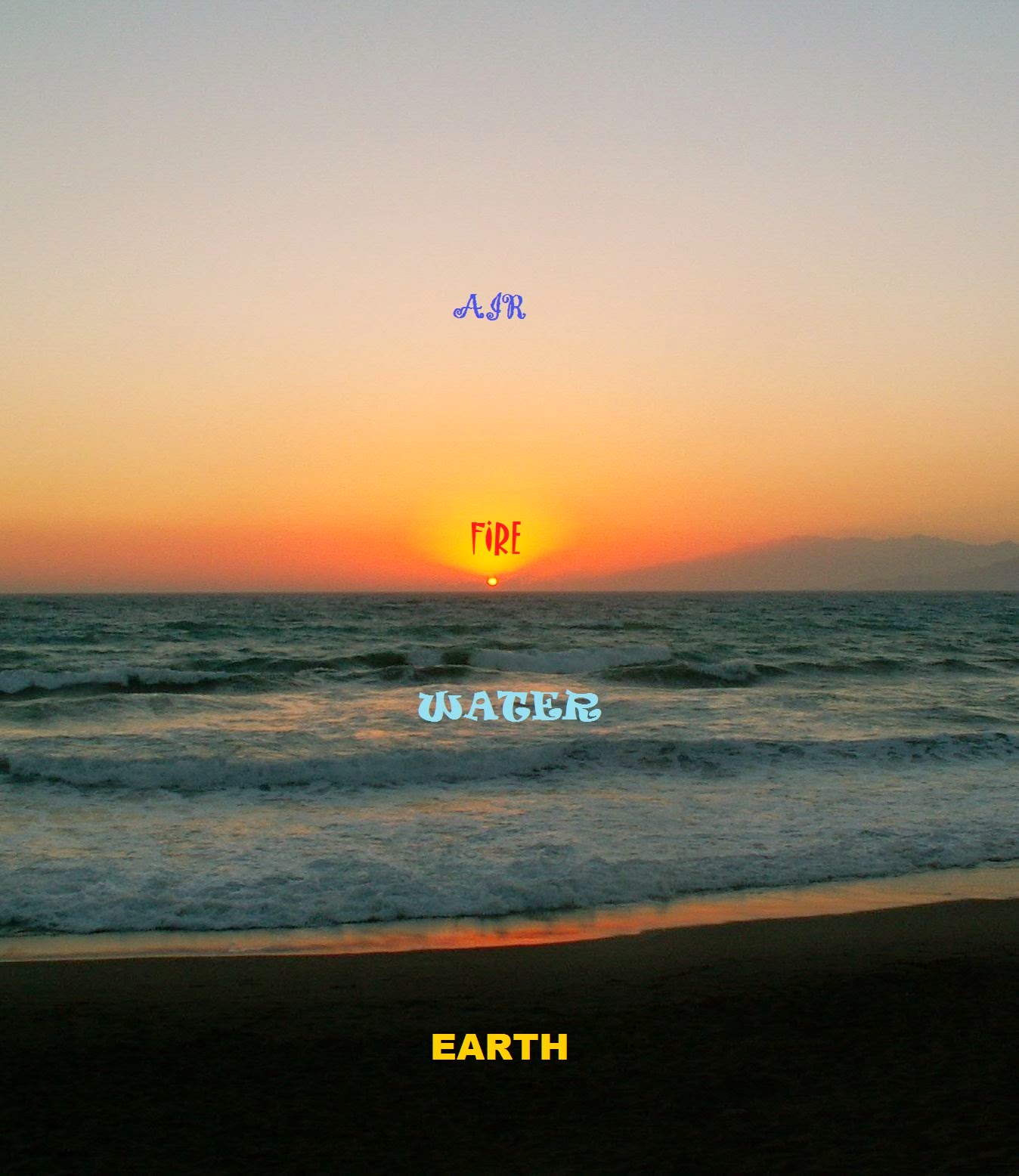 Back in the days of the Ancient Greeks there were four elements: Fire (represented by the sun), Air, Water and Earth and these corresponded to the four states of matter we still refer to today: plasma, gas, liquid and solid. The reason I mention this is that one of those elements, Air, is currently moving past us at about 70kph in what is known as a gale force wind. This is a seasonal wind called the Meltemi caused by low pressure to the east of us and high pressure to the north. The air whizzes round the low pressure system over Turkey in an anticlockwise direction (or widdershins as we used to call it), meets the air travelling in a clockwise direction round the high pressure system over mainland Greece and they join forces and trumpet their way down the Aegean merrily making havoc with everything in their path. The practical upshot of which is that we’re rather confined to barracks this week but never mind, we’ll battle our way up the outside staircase to what I laughingly call my laboratory and potter about in there for a while. 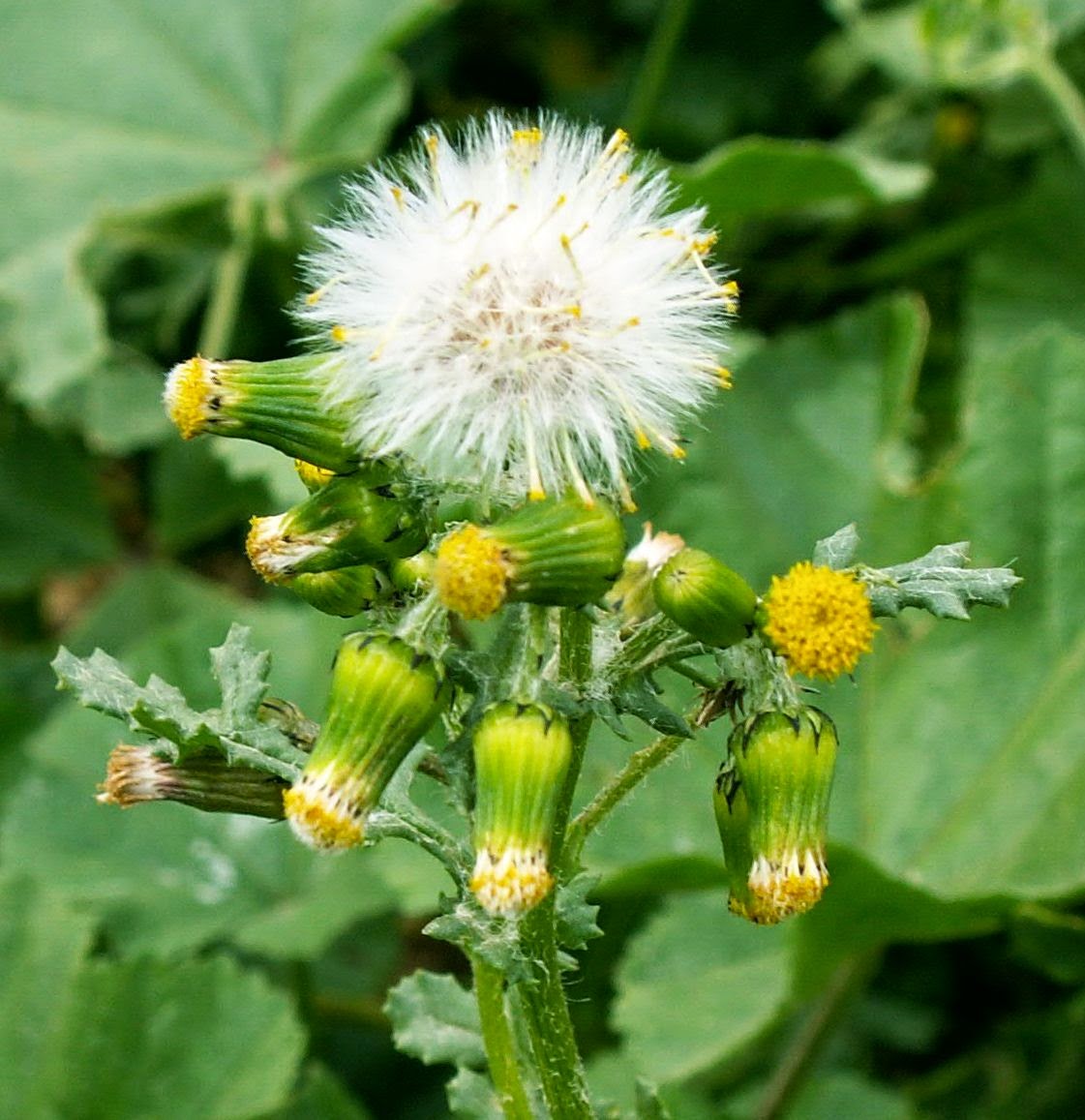 Not that air moving about the planet is a bad thing of course. Without it eroding the rocks we wouldn’t have any soil in which to grow our crops. The mountains might look even more majestic but they’d be exceedingly barren without any flowering plants. Not only do the flowers need the soil in which to grow but many of them, particularly the Asteraceae family, need the wind to spread their seeds. The Asteraceae  family include all those flowers, like dandelions, sow-thistles and groundsels , who’s flowers turn to fluffy seed heads and float away on the breeze like tiny parachutes. Sycamores and maples have winged seeds like helicopter blades that fly them away from the parent tree and tumbleweeds simply uproot themselves and go where the wind doth blow. Actually, if you think of yourself jumping out of a helicopter, parachuting to the ground then rolling out on landing you’ve pretty well covered the subject of anemochory or wind dispersal of plants in one go. 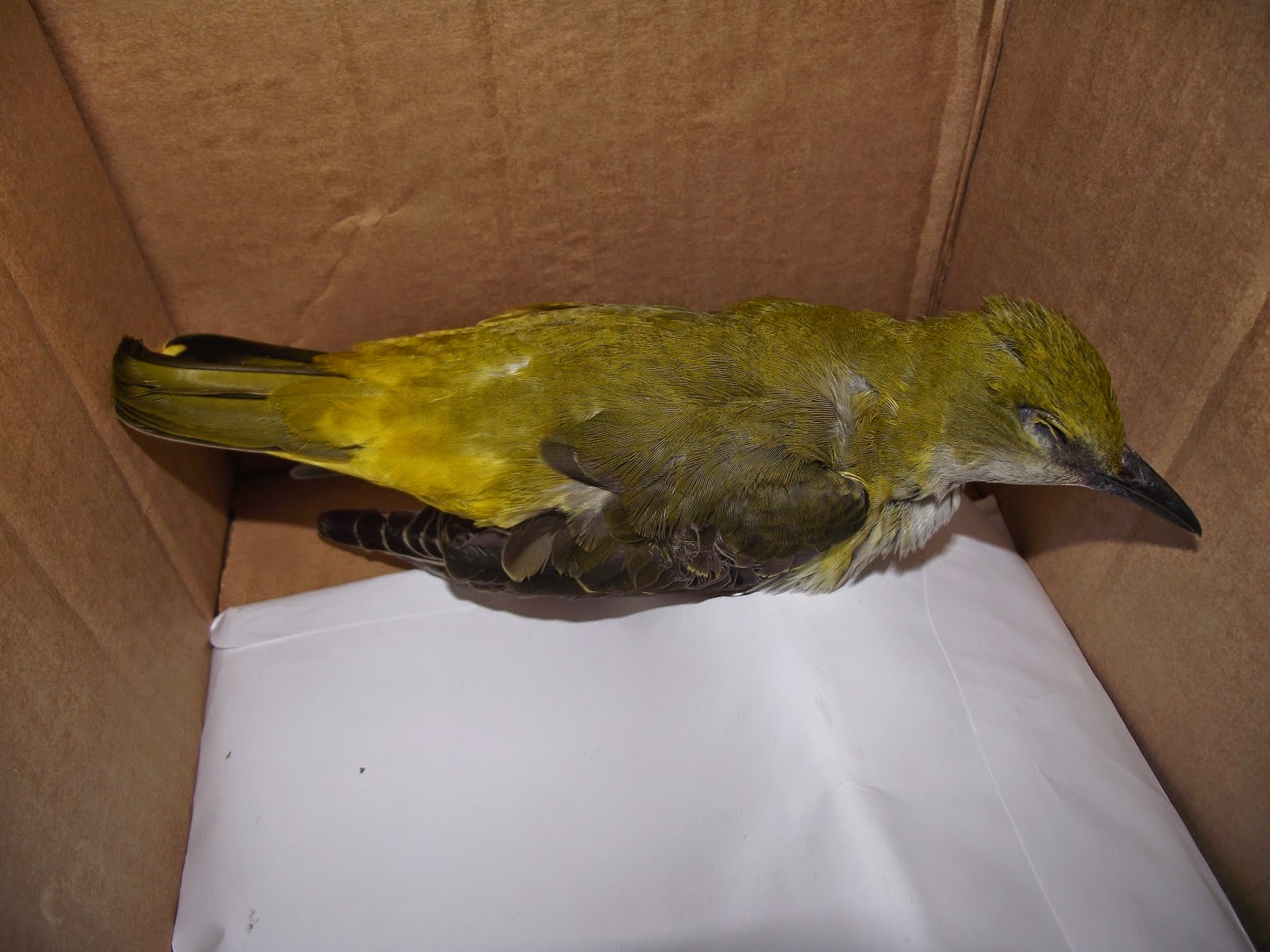 Not only plants but animals, particularly the birds of course, need wind as well. Not just to assist in take-off and landing but larger birds of prey use air currents called thermals to glide around on and birds of all kinds have been using high altitude wind lanes for migration long before we ever thought of doing so. But even the birds don’t like this howling gale. A couple of years ago I came down this staircase in the morning and found a Golden Oriole trapped and exhausted in the pomegranate down there and I had to bring her in and put her in a dark box to give her a fighting chance of recovery. 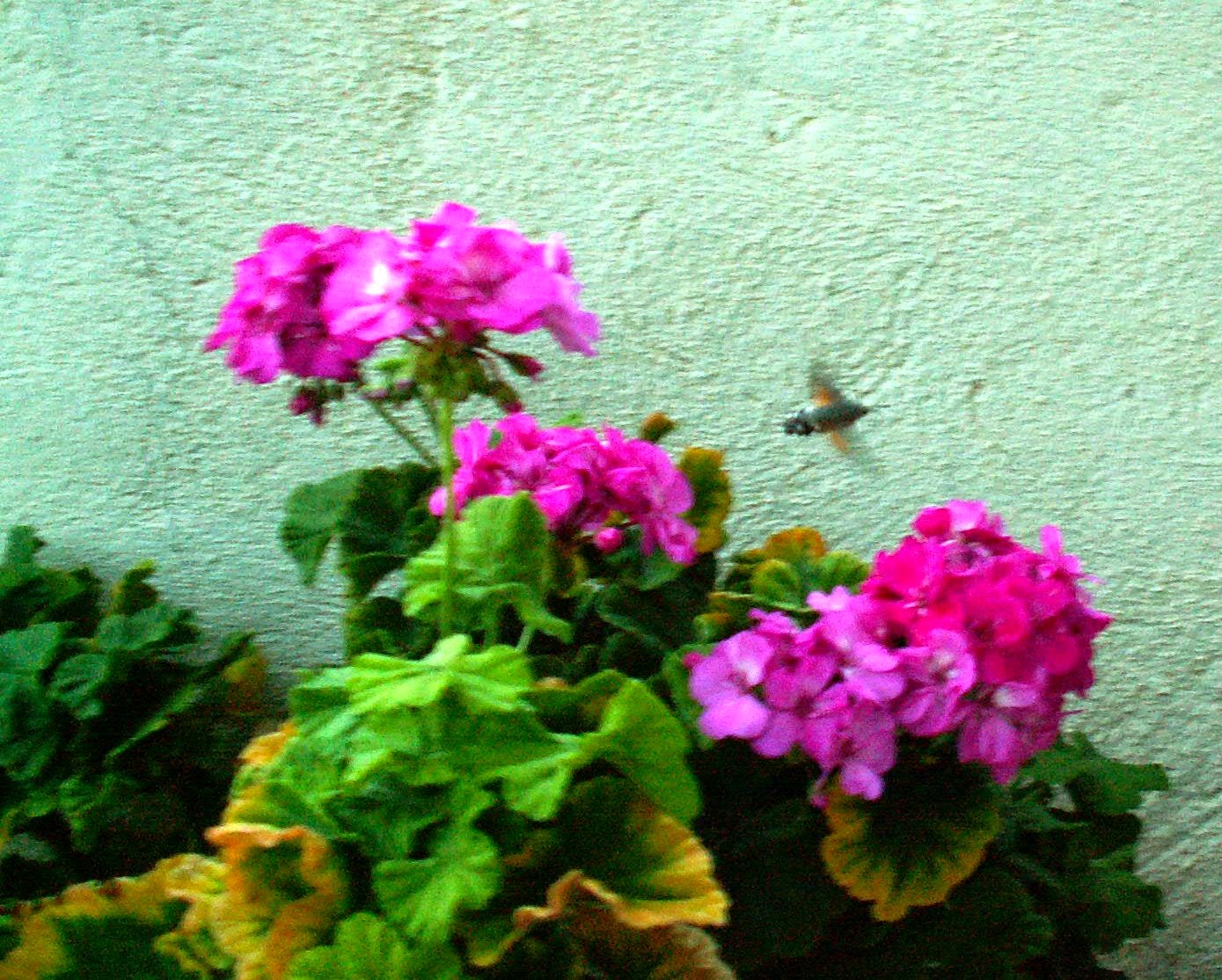 Some butterflies and moths migrate as well, like the Humming-bird Hawk Moth which I only ever see down here in the autumn. Unlike birds however moths and butterflies only migrate once in their lifetimes. Some species that make long migratory journeys, like the Painted Lady (which we met back in April in Cretan Fortress Invaded by Nature ) rely on a tail wind of about 35kph to complete their journey from Africa to southern Europe. 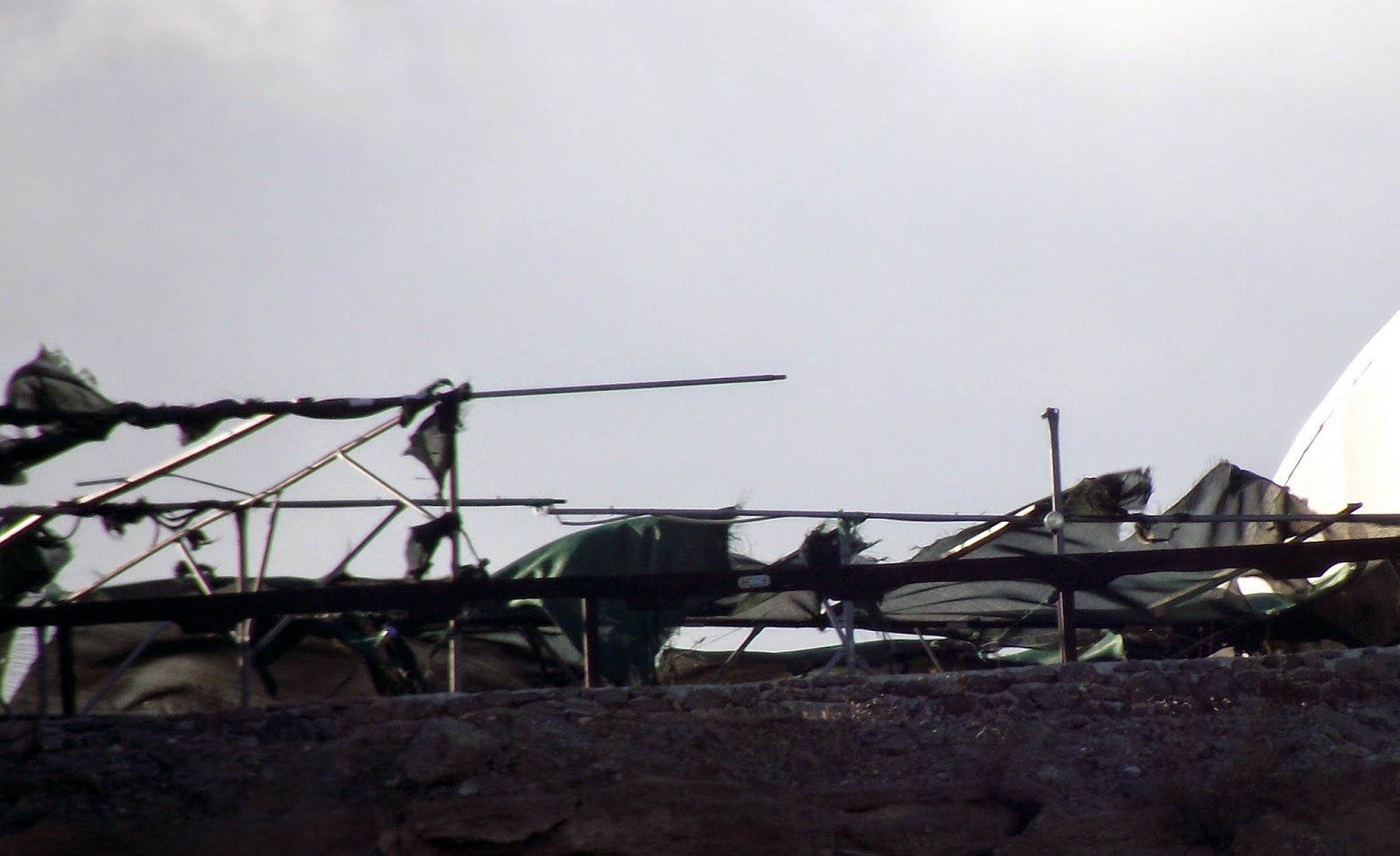 Watch out as you get to the top of the steps as it’s very blustery up on the terrace here. I can’t see any sensible bird or butterfly flying in weather like this. I see that the restaurant at the top of the hill is in danger of losing its canopy. If it comes flying this way grab hold of it someone – we could do with some shade up here when this Meltemi blows itself out. Here we are at the laboratory but there’s one last interesting thing about insects and air movements which I’ve just remembered. It involves an insect that you won’t find in here unless it has snuck through my elaborate defences because, quite frankly, they give me the heebie-jeebies. 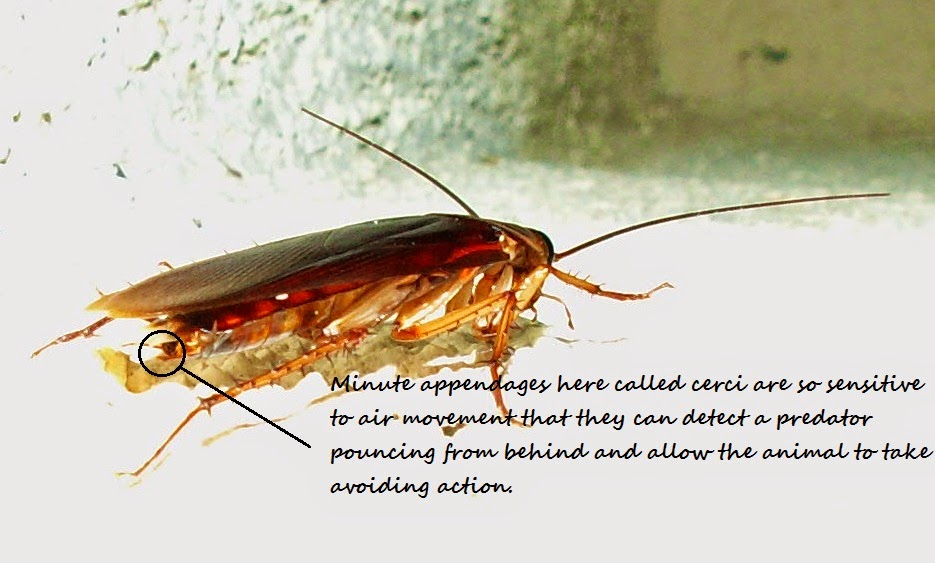 It involves the cockroach, universally despised but you have to begrudgingly admire an insect that’s been around for the last 300,000,000 years or so even if it has stubbornly refused to evolve into something more appealing. At the back end of the beast are a pair of appendages called cerci that are so sensitive to air movement that they can detect the subtle pressure wave of a pouncing predator and the cockroach can take evasive action before the predator lands. Love ‘em or loathe ‘em that’s a pretty neat trick in anybody’s book.

Come on in and shut the door. That’s better. Is that the hour? I’ve been so long-winded gassing on about air movements that we’ve quite run out of time. You’ll have to excuse me but I’ve been in my element as it were. Sorry, enough of the bad puns. I don’t know about you but I could do with something hot and refreshing. Turn that Bunsen burner on would you? I think I have a retort here that hasn’t been used for anything too disgusting lately. Tea anyone?
Until next week – good hunting.