In The Arms of Giants 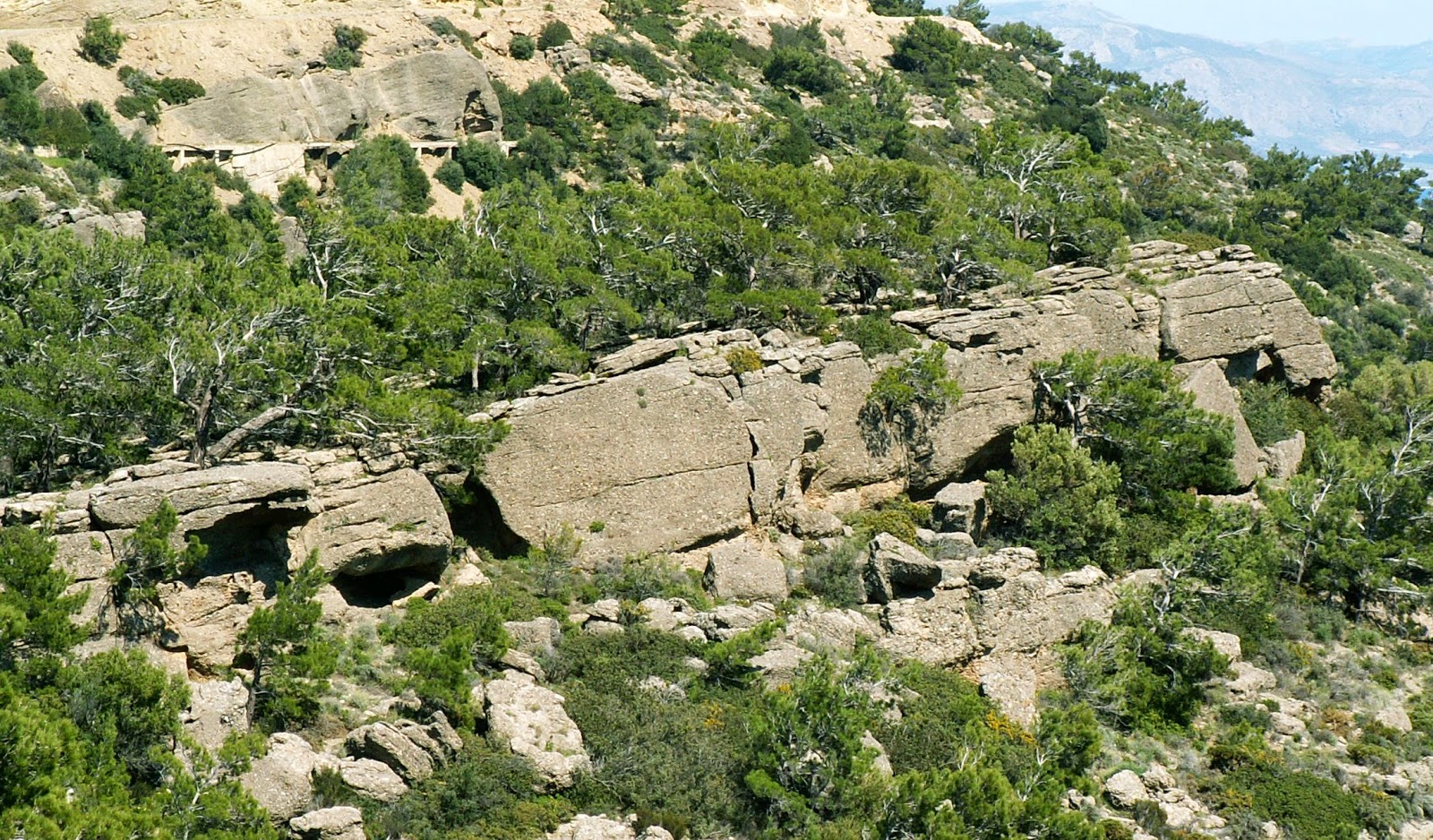 Did anyone think to bring a bullwhip? A pity because after last week’s leisurely stroll Along The Ardefsi I have a feeling that today’s excursion is going to be a bit more Indiana Jones. Our objective, ladies and gentlemen, is to examine the area around and on top of that grasping claw-like edifice down there. There’s a second one in the distance, beyond the ardefsi. It’s not hard to imagine one of the Giants of Greek mythology, Pallas or Porphyrion say, taking a breather during their battle with The Gods and resting here with his hands upon his knees, gazing out to sea wondering how and when the battle would end. From such landscapes were the Greek myths concocted. The Giants lost by the way, after a bit of chicanery from Zeus prevented Ge from finding a magic herb. Anyhow let’s get down there and see what magic herbs and other wonders of nature we can locate today.

Now somehow we’ve got to find a way up there but before we do it seems we are in the middle of a beetle drive. Firstly, when we left the road we had a little Darkling Beetle mooching about on that parasitic Dodder plant that we came across a couple of weeks ago (rather worryingly it has now spread to a second clump of Cretan Ebony thirty paces further down the hill). Then, here on this Cistus we have a Flower Chafer, a name it derives from the Old English word ceafor meaning beetle. And finally, our friend from last week, the Long-horned Beetle tucking into another Asphodel. Three beetles from three different families, that’s a good start to the day.

Well, that wasn’t too bad was it? Now we’re up on top of the Giant’s hand the views are stupendous and the air is full of the scent of wild herbs and the soft drone of pollinating insects. It seems as if we have entered a honey factory. It’s this purple flowering Sage that seems to be attracting the Honey Bees. Not all bees make honey of course; of the twenty thousand or so known species of bee there are only seven species that make the honey for our table.  The sage that they’re working on is a wonderful plant. Apart from being a delicious accompaniment to pork dishes it has been recommended for virtually every ailment known to man at various times. Even its scientific name, Salvia, comes from the Latin salvere meaning to save. Modern research has proved it to have many useful properties from anti-sweating agents to blood fat reduction through to the management of mild to moderate Alzheimer’s disease. Perhaps this was the magic herb that Ge was looking for before Zeus thwarted her plans.

Let’s leave the honey bees to their industry and go and rest awhile in the shade of the fir trees. Isn’t it amazing how they seem to grow out of solid rock? Lying here is like listening to nature’s orchestra with the bees providing the bass drone, the crickets and grasshoppers on percussion and the birds providing the melodies. The greenfinches and the chaffinches counterpointing one another and the loud pitchoo of the great tit providing the main theme.  It’s strange; although the Great Tit is quite common in these parts I’ve never seen a Blue Tit down here. I’ve seen them in Rethymno and on the Omalos Plateau but never here in Lassithi.  I wonder if there is a line across the island beyond which they will not venture.

[A quick survey for those of you who live on the island – let me know where you do see (and where you don’t see) Blue Tits on Crete and I’ll try to build up a map.]

If we stroll along the Giant’s forearm towards its elbow, as it were, I fancy we’ll find a somewhat less arduous way of getting back to our start point. Quite a few more orchids among the stones here and a little Restharrow I haven’t seen before… and who’s this lurking at my feet? A young Mediterranean Slant-faced Grasshopper. Do you remember the cheeky adult which perched on my pack up at The Hidden Plateau? This is a youngster of a closely related species. Between egg and adult insects have two different ways of growing up. Some, like the beetles and butterflies hatch into larvae and eat like mad for a bit before going into a sort of suspended animation called a pupa where they change their body shape completely. This is known as complete metamorphosis. Others such as grasshoppers and crickets don’t entertain all that palaver but hatch as miniature adults, gradually changing their appearance in a series of moults as they grow bigger. This is known as incomplete metamorphosis. The various stages are called instars and, particularly the late instars when they are almost fully grown but look quite different to the mature adult, can fool you into thinking that you have found a completely new species. So we’ll photograph this little chap and add him to our species record for future reference. So, a pleasant perambulation back through this garden of The Gods and then a little lunch somewhere I think.