Here we are, back together again and as happy as can be. When we parted company back in January we were part way up the Eden valley on a voyage of discovery (see Riding The Griffin).

My departure was a bit sudden and mysterious but there were good reasons for this which I will tell you about a little later.

If we look back we can see all the way to where we began our journey and somewhere further up the valley is the little church of Agia Paraskevi, or St. Friday in English, where we’ll be making for today. Did you see that? A hare just bounded across the path – pity I was taking a picture of the landscape and trying to get that sea squill into shot. Still, it’s a good omen at the start of our journey.


A lovely bit of mixed woodland with pines and planes, myrtles and sage and it smells absolutely heavenly. Do you notice something? Despite the sounds of running water all around us there are no midges or mosquitoes. That’s because the water has all been sequestered for human use and is running through pipes. In fact the only fly I’ve seen is this Flesh Fly hovering around the plane tree. Flesh flies are unusual in that they don’t lay eggs like other flies but drop their larvae directly into decaying material. These maggots then feed on it which helps to keep the place clean. Useful things, flies.


Ooh, look at these plane leaves. Now these are interesting little ladies, they’re wax scale insects. Yes, I know that insects are supposed to have six legs and two pairs of wings and male scale insects do indeed have the required number of appendages. Females, on the other hand, retain their immature shape even when they become sexually mature. They are parasitic and although she sits there looking all pretty with her flouncy skirt, underneath she’s boring into that leaf and drawing up the tree’s life giving sap. They don’t get it all their own way however as scale insects in turn can be parasitized by tiny chalcid wasps that lay their eggs in them.

This next bit looks a bit tricky, we seem to have run out of path. Just check the compass would you? Are we still heading in the right direction? Good. We’ll go for it then. Just have a look at these cocoons in this lentisc bush a second. I appreciate that it’s not the most convenient place to stop with your legs splayed between two rocks and your left hand grabbing a branch for support, but they’re worth a quick look. These are the egg cases of the Tropical Tent Web Spider. I’ve seen a number of these over the years and always in lentisc bushes for some reason. I mean, they’re obviously ideal for their style of web building and all these little twigs are just right for the number of support lines that the web requires but myrtle is very similar and there’s plenty of that around but the spiders spurn it for some reason.


I think that I can see a track up ahead and if your compass reading is accurate then it should be St. Friday’s. I don’t wish to cast aspersions but it would appear to be a pumping station. Day one and we’re lost within the first couple of hours – par for the course I suppose. No matter, if this is the business end of the track then the other end should be the access point on the main road. We’ll follow it. Meanwhile there’s a rather nice butterfly dancing around our feet. It’s a Cretan Grayling and although it looks very similar to other Graylings on mainland Europe it is genetically different and confined to this island. The mainland species fly from June to August. Here in Crete I usually see them either about now, or in April/May which suggests that they are not only genetically different but have a different life cycle as well. 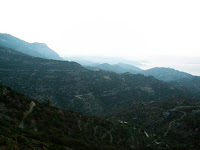 Ah, I told you that we would reach the main road if we followed the track didn’t I? The church was well concealed which is somewhat ironic as St. Friday has been associated with the gift of sight ever since she restored the same to the Roman Emperor Antonius. True, it was she that blinded him in the first place by throwing boiling oil in his face but as he was trying to get her to renounce her faith by immersing her in a cauldron of the stuff at the time I think that she can be excused.

Now, I did say at the beginning that I’d tell you why I disappeared so suddenly at the end of the last series but as I seem to have wittered on a bit this week I’ll only mention one of the reasons. I held all of my observations made over the past twelve years on a database. In January it irretrievably crashed and I’ve spent many of the intervening months verifying and transferring the contents to a world wide database run by the California Academy of Sciences called iNaturalist. One of the main benefits of this is that not only can I access my notes anywhere I can get a signal but so can you. Not only that but we can access anybody else’s observations and a whole lot more information besides. It really is a most powerful tool. Click here for free registration and take a look: http://www.inaturalist.org/login