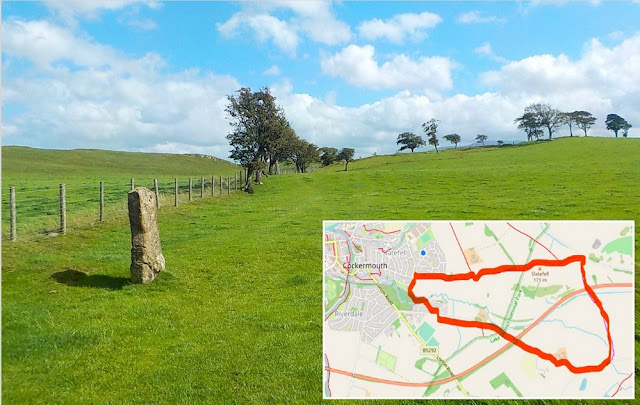 Twenty years or so ago, if I saw a hill, I felt an irresistible urge to climb it. Now, older and wiser, I have come to realise that majestic mountains and fabulous fells look at their most majestic and fabulous when they’re towering above you. True, when you get to the top, the views can be breathtaking, but these days, by the time I get to the top, I’ve not got a lot of breath left to take. Which is why I’ve decided to introduce the idea of Fell Walking For Wimps. No-one else appears to have bagged the title yet, so I’m having it.

Our little walk today takes us up over Slate Fell, to the East of Cockermouth, then back round to where we started, in a five mile triangle. Unlike Scafell Pike, England’s highest mountain (also in Cumbria), which rises to a little over 3,200 feet, Slate Fell is a far more modest 520 feet, and as we are starting at 220 feet then we are merely going to be strolling up hill at the start. 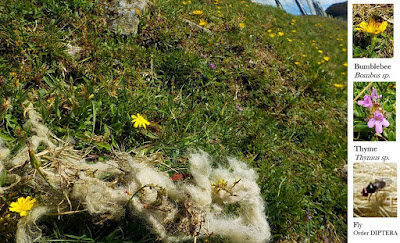 About three quarters of the way up now, and this little bank looks worthy of closer investigation. Let’s sit and take a closer look at it. No, it is not just an excuse for a rest. I’m still fighting fit. Starting with the yellow flowers which are not dandelions [dandelions have hollow, often pinkish, stems]. These are more closely related to chicory, look at the leaves. I see that there’s a bumblebee taking advantage of this pit-stop to refuel. That little mauve flower up the bank is wild thyme. There are two species generally to be found in Cumbria, Thymus praecox and Thymus serpyllum. I think this is the former. Combined with parsley, in a white sauce, it’s terrific with fish. One for Steve's Wild Kitchen when I eventually get the keys to my new flat. But, back to our bankside, even this scrap of sheep’s wool isn’t devoid of interest. There are tiny flies in it looking for even smaller things to eat. OK, that’s enough rest, um, investigating, for the moment. Onwards and upwards. 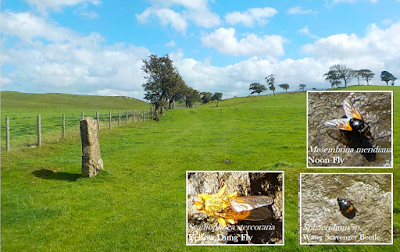 Naturalists, as you probably know, have an unhealthy preoccupation with dung. I’m no different, and I’ve noticed a lot of cow pats up here, so, let’s find a nice, sloppy one and see who’s at home. Flies, as you would expect, but a bit prettier than your common house fly. The big one, with a flash of orange on her wings is a Noon Fly (because you often see them in the middle of the day), and the little greeny/gold job is a Yellow Dung Fly. Both of these flies lay their eggs in this nutrient rich cow dung and their maggots help in its decomposition, ensuring that we’re not wandering about knee deep in the stuff. The other little fellow is a Water Scavenger Beetle. Most Water Scavengers are aquatic, as their name suggests, but these are specialists. They also lay their eggs in cow dung, but their larvae don’t eat the dung, they feed on the maggots of the flies. There’s a whole world of life going on in a cow pat. 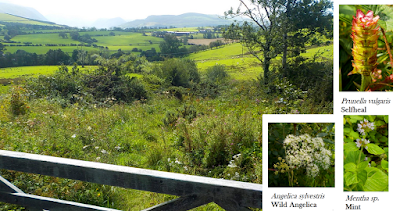 We’ve now reached the Embleton road and we’re going to take a quick right turn and change from footpath to bridleway. That’s it, stretching out before us and there’s far more plant life as it is ungrazed. Quite a pharmacy in fact. For a start, we have some Selfheal, which the Native Americans use to treat boils, cuts and inflammations. Mixed with other herbs, such as mint, which we also have in here, it is supposed to be effective against halitosis. Mint, as well as being a good culinary herb, is well known for easing an upset stomach, and we also have some Wild Angelica here. You have to be very careful with this one as it looks so much like other umbilifers such as Cow Parsley and Hogweed. Up until the 20th century, both the stems and leaves were used as a vegetable and, medicinally, it was used to cure scurvy. 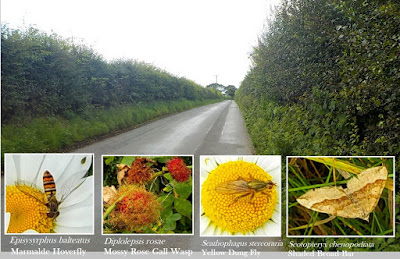 Here we are at the end of the bridleway and it’s about three miles back along country roads. It may not look too interesting but there’s a magnificent hedgerow and verge, a habitat in decline across the UK, and just to prove it’s importance we’re going to count the number of different plant and insect species that we see. Firstly we have some Ox-eye daisies being pollinated by various flies and wasps, including this lovely Marmalade Hoverfly. These are marvellous little flies that overwinter in the Mediterranean and then come all the way up here for the spring and summer in a multi-generational leap. We’ll record this one for the Marmalade Hoverfly Monitoring Scheme which is keeping an eye on them as indicators of the effects of climate change among other things. Next we have something which you may not recognise as an insect at all. These pompoms on a wild rose stem are the product of the Mossy Rose Gall Wasp. These are taken advantage of by another species of gall wasp that lays its eggs in the nutritious bundle, and the larvae of both wasps are likely to have two more wasp species lay their eggs in them! Finally, the whole lot may be eaten by a small mammal in a sort of two wasp roast. Some more ox-eye daisies now, this one being pollinated by our little friend from the cow pat, the Yellow Dung Fly, taking on some much needed fuel and down here, taking a rest in the grass, is a Shaded Broad-Bar moth.
I make that 43 different plants and 22 different insects. This will provide food for numerous small mammals (and big ones, I saw you stuffing yourself with blackberries along the way), as well as an important corridor between habitats. 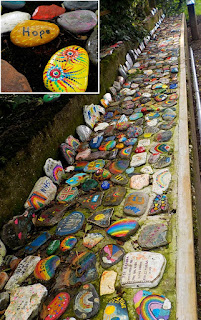 Just a short stroll now, back to our starting point, but we’ll just pause at this little bridge over Tom Rudd Beck to look at the handiwork of the local children, commemorating this strange old year.

Quick admin note: I’ve changed the style of the blog to make it clearer and easier to follow by email or feed.