A Bush Full of Beetles 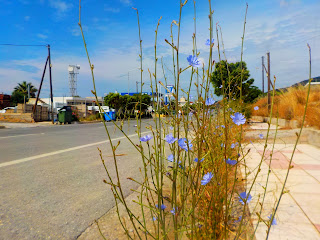 One of the marvellous things about Crete is that there is food growing just about everywhere. Even here on the side of the main road running through Ferma we have wild chicory, a relative of the dandelion. People often get confused between chicory and endive which is not surprising as basically they are merely different species of the same plant. This one is Common Chicory (Cichorium intybus) whereas Endive is Cichorium endiva. Endive comes in two cultivated varieties; curly (var crispum) or broad-leaved (var latifolia) and the wild Endive is Cichorium pumilum which also grows here on Crete. Whichever you choose they're packed full of vitamins A and K and high in fibre so they're good for you. 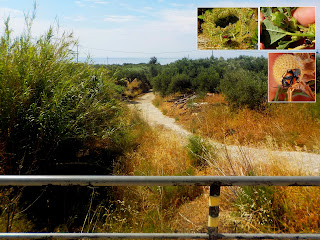 This is the lane we'll be taking to the sea and there are quite a few plants growing down in this gully here so let's go on a bug hunt (and by bug hunt I mean let's concentrate on the 'true bugs', the hemipterans1, as opposed to anything that creeps or crawls). First off we have a couple of adult striped shield bugs (Graphosoma) investigating a wild carrot that is going to seed and next to that some young green shield bugs (Nezara) on a mallow leaf that are in different stages of development. The little black, white and red one is in his fourth instar and the green one is in his fifth and final instar. So when they next moult the little one will look like the big one and the big one will lose that fetching design upon the back and become plain green with maybe a touch of yellow depending upon his colour morph. Both of these shield bugs (stink bugs in the US) are in the same family, the Pentatomidae, but this little red and black job that you've found is a Deraeocoris from the Miridae family.

So we have three genera from two families in the order Hemiptera. To put that into some sort of context our genus is Homo, we are in the family Hominidae (with the great apes, orangutans, chimpanzees and bonobos) which is a part of the Primate order which includes us lot plus all the other monkeys, lemurs, gibbons and so on. 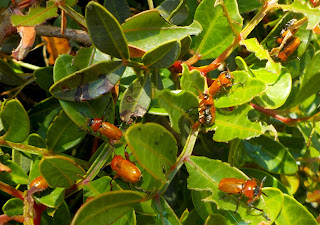 You'll never guess what I've just spotted – a bush full of beetles. There are dozens of them buzzing about all over the place. Nicely differentiated little insects; black head, deep orange thorax and pale orange wing cases covering the abdomen. You can tell that they're beetles (order Coleoptera) and not bugs because they have a line down the middle of their abdomens separating their wing cases. The fact that they look a bit like elongated ladybirds make me think that they are Leaf Beetles (family Chrysomelidae) but beyond that I wouldn't like to say. I think I'll collect a few on the way back and put them in a jam jar to observe their behaviour back at the lab. 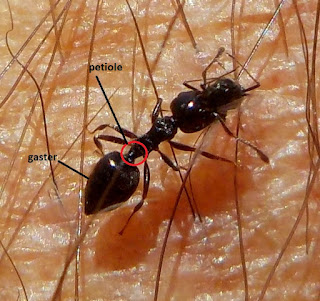 We were discussing ants last week (order Hymenoptera along with the bees and wasps if you remember) and one is conveniently walking up my arm so we can have a closer look at him. All ants are in the same family, Formicidae, but there are tens of thousands of different ant species (most of which have yet to be classified) so to make things easier we break them down into subfamilies. As far as I know there are three subfamilies on Crete (only three that I've come across so far at any rate) and the clue to differentiating between them lies in that thin bit connecting the thorax to the abdomen (called the gaster in ants). I don't know if you can make it out but in this ant the thin bit, called the petiole, consists of two parts which tells us that it is in the subfamily Myrmicinae. This particular fellow also gives us a clue in the shape of his gaster which is distinctly heart shaped. That is a peculiarity of the Crematogaster genus or Valentine Ants. Sorry? Why has he got twelve legs? I was hoping that you wouldn't notice that. The six in the middle are his own, the six at the head end belong to another ant which he has clamped in his jaws. Just think of him as an undertaker. 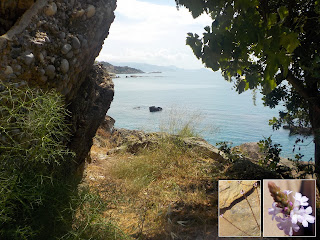 And finally...the sea. Down there is a place I call Gully Cove and we'll go down to it next week but for now it's a nice shady place to sit and admire the view. We started the walk by observing that there is food growing just about everywhere in Crete and here is no exception. There's a carob tree (chocolate substitute) to our right with a grape vine growing through it and a stand of fennel to our left. Fish flavoured with fennel followed by chocolate mousse and washed down with a bottle of wine and all the major ingredients to hand. You can't get better than that. After that I would suggest a little nap but if you find that you can't relax then this little pink flower may help. It's Verbena with which you can make a nice pot of herbal tea with scientifically proven soporific properties. Night-night. 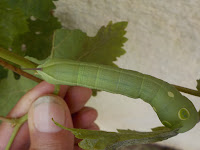 Sometimes the best discoveries await you when you return to base. Like this Vine Hawk Moth caterpillar (Hippotion celerio) that was waiting for me on my grapevine when I got back. I've christened him Jeremy (after the BBC Radio 2 presenter Jeremy Vine) and I'll keep you updated on his progress.