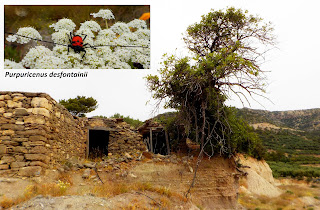 We'll start where we left off last week at the derelict dwellings and make our way down to the heart of the village but before we do I've just seen something large and red fly by my nose and land on that wild carrot over there. What a magnificent specimen (and go compare that for a facial appendage). Those fantastically large antennae mark him out as one of the Longhorn Beetles (family Cerambycidae). The antennae are used primarily for smelling the air but in some insects they actually help to stabilize their flight (which is a bit counter-intuitive as you'd think that they would make the creature a bit of an awkward flier). But when you think of a tightrope walker with a long balancing pole it makes a bit more sense. 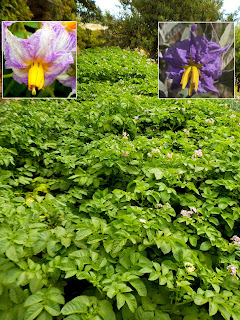 This is something I wasn't expecting to find, a terrace full of potatoes planted on the hillside totally out of context with everything around it. The flowers are rather pretty and very similar to Silver-leaved Nightshade. The reason for this is that they are both in the same family (Solanaceae) and like all members of the Nightshade family they contain the poison solanine as a natural insecticide. Potato poisoning is rare but not unknown: in 1979 a group of 78 schoolboys from south London were poisoned and although they survived to tell the tale (previous cases have been fatal) they were pretty ill and some were confused and hallucinating for several days afterwards. My grandmother's old maxim: 'never eat green potatoes' turns out to be good advice. Although the green is merely chlorophyll found in all green plants (for which reason I'd always rather discounted my grandmother's warning) it is an indicator of the build-up of solanine. Ah, the old 'uns knew a thing or two. Generally the amounts of solanine in spuds (and tomatoes and aubergines too for that matter who are also in the same family) is too low to cause any problems at all. 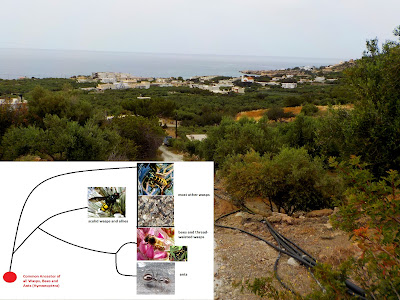 This is what passes for Central Drive in Ferma and I see that a colony of ants are using those black water pipes as a motorway. They seem to be moving house judging by the number of eggs and pupae being transported down the hill. We always think of bees and wasps as being natural compatriots but ants fall into the same group of insects too; the Hymenoptera. How they are related within the group has always been a bit of a puzzle as it all depends upon which aspects of their anatomy and/or behaviour you use as your yardstick. Anyhow, a few years back a group of scientists led by Bryan Davis in California decided to solve the puzzle once and for all by scouring the countryside for ants, wasps and bees of all denominations and taking DNA samples (I'm not sure that I'd have volunteered to be a part of that team). They sequenced the genomes and found that the majority of wasps went their own way from a common ancestor at an early stage. A few, the scolid wasps and allies, along with the bees and ants decided upon a different evolutionary path. The bees and ants then parted with the scolids and finally the bees and ants separated. All except the thread-waisted wasps which followed the bees' evolutionary path (so maybe we should call them thread-waisted bees?). So, when did we learn that ants are more closely related to bees than wasps are? Not until 2013 which just goes to show how much there is still to be discovered about the natural world. [1] 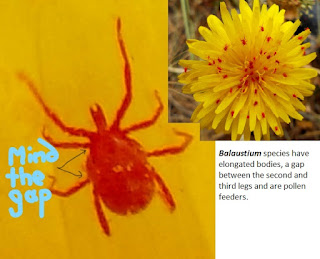 Oh look, a red spotted dandelion. Ye gods! The spots are alive. The area is literally crawling with little red animals. A quick leg count under the hand lens – eight so they're arachnids. They are a type of mite going by the name of Balaustium. There are a couple of clues to identifying this genus: firstly, unlike other members of the Erythraeidae family they are pollen feeders rather than predators and secondly they have a noticeable gap between the second and third legs. Apparently, although they are vegetarian they can give you a nip so maybe it's not a good idea to let them swarm up your left leg like that. 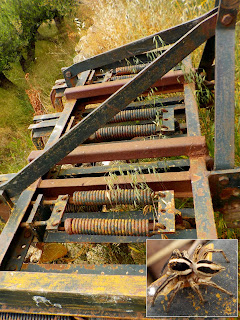 I see that you've gone for the squishing method of mite removal rather than the gentle brush. Maybe not so wise, your leg now looks like a war zone. No matter, come and have a look at this harrow I've just stumbled upon. Is this the original Harrow-on-the-Hill? I wouldn't have thought that this is the most useful piece of equipment you could have on a steep hillside like this but it explains how the potatoes got planted. There's another one of our jumping spiders down there look. There is a controversial theory that these spiders are socially superior to other spiders and this would appear to be supporting evidence for that theory. How so? He's obviously an Old Harrovian. He's even in the school colours. 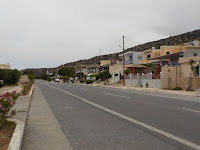 I suppose I ought to tell you a bit about the village facilities in case you fancy a visit: plenty of places to stay including a hotel (Porto Belassario) and a number of self-catering apartments. There is also a campsite at nearby Koutsounari. A choice of places to eat and drink as well as a village store, a butcher, a baker (no candlestick maker), two hairdressers and a petrol station. And me of course. Everything you need really. Yes, we have no MacDonald's, KFC, faux Irish Pubs, rowdy nightclubs or strip joints(but we do have bananas in season).