Welcome to the Wildlife Hotel 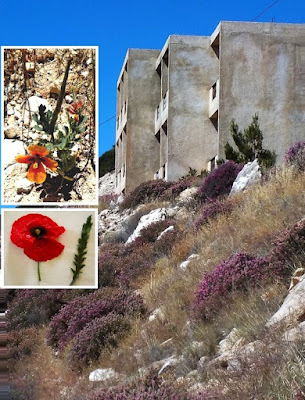 This is it, the Wildlife Hotel. It wasn't designed as such but is an abandoned project that has been this way since before I arrived in 2004. Gradually the native plants have taken over the gardens and the wildlife has moved in. Before we nose around though I'd just like to draw your attention to these poppies down here. To me, poppies used to be those red things that you wore on Remembrance Day or the mauve things in the middle east that provided the world, for better or for worse, with opium. I was quite surprised to learn that there were nearly eight hundred species dotted around the world with nine here on Crete alone including the familiar red and mauve ones. This particular one is widespread but not very common on the island and is called the Red horned-poppy. Presumably on account of that massive, rampant seed pod. 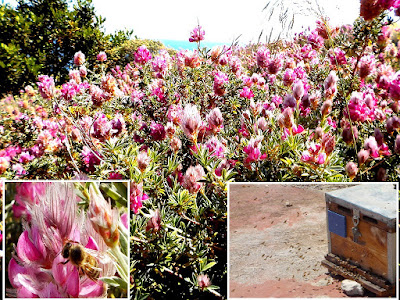 The other flower that is prevalent in this region is the endemic Cretan ebony. This is acting like a magnet to the honey bees and I see that some enterprising individual has placed a couple of hives on the approach way. Don't worry, they won't bother you. You may think that you look and smell pretty but you can't hold a candle to the Cretan ebony. Just look at the air traffic control that's going on down there at the hive – the bees take off and fly out bottom right and approach and land from the top left. 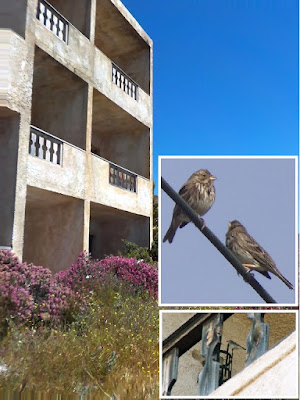 The air may be a-buzz with bees but there's not much in the way of bird life up here today. I can hear Blackbird, Sardinian Warbler, Chaffinch and Sparrow but ten years ago I used to see Buntings, Flycatchers and Linnets up here quite regularly. A sad illustration of the decline in European songbirds unfortunately. Populations of the Spotted Flycatcher that I photographed on the balcony back in 2006, for instance, have dropped by a staggering 89% in recent decades. 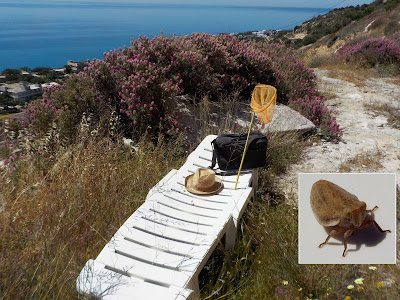 Let's rest in the sun and admire the view for a while. There's some nice grass to sit on or a flat rock if you'd prefer. As you can see, I've bagged the one surviving sun lounger. Looks like I'm going to have to share it though. This curious little insect is one of the hoppers. There are four main groups: plant, leaf, frog and tree hoppers. I think that this one is a leafhopper but they're all very similar until you study them in detail. They all belong to the same order, the hemiptera or true bugs, and are most closely related to the cicadas which keep us entertained throughout the summer. Unlike the cicadas however they do not announce themselves to the world in the same deafening manner. 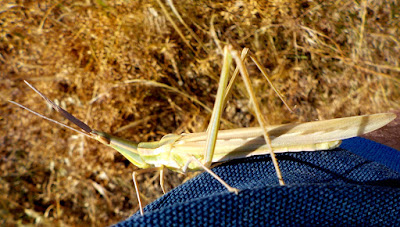 The little hoppers are lovely but I like an insect that you can pick up and make friends with; like this magnificent grasshopper. Isn't he a beauty? I've just picked him up from among those wild oats down there and he's taking being handled gently with equanimity. That's right, you sit up there on my shoulder – pirates have parrots, why shouldn't I have a grasshopper?

That just about wraps it up for this week so it just leaves my new friend and I to lead you back to where we started and next week we'll investigate the top track above the village.