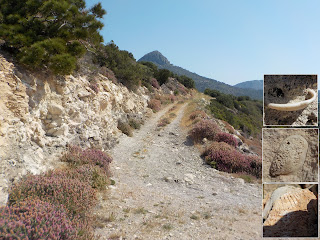 We'll leave the denizens of the Wildlife Hotel to their own devices and continue our walk around the village along the top track. A couple of weeks ago (Say It With Flowers) we found some interesting looking fossils. Just down the hill from where we are now in fact and this is a great fossil hunting area, particularly for sea shells from the time that Ferma was raised from the sea bed by a huge tectonic upheaval about twenty odd million years ago. So let's poke about in this exposed limestone and see what we can find. Not a bad little haul for ten minutes work; it looks like a couple of clams and a slipper shell. OK, so they're not from the Jurassic (roughly 145-200 million years ago) but Neogenic (2.5-23 million years ago) but that would have spoiled the alliteration. We'll probably find some of their modern relatives when we investigate the beaches later. 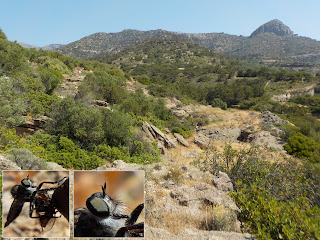 We'll wander off the track here for a bit and see what this rocky outcrop has to offer. It seems as though we have disturbed a robber fly at his breakfast. These are ambush predators that feed almost exclusively on other insects; in this case an unsuspecting cicada has been the victim. Despite their murderous habits I think that they're rather distinguished looking fellows with their great white beards – a sort of Father Christmas of the insect world, though not as benevolent, obviously. 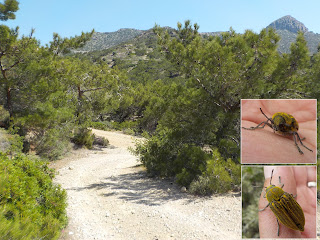 We may find a bit of shade now as we move into the pines, it was getting rather hot on the exposed rock back there. I can hear a couple of greenfinches about but I've given up trying to spot them in this sort of habitat, they're too well camouflaged for my eyes. Not so this spectacular Jewel Beetle that's just landed in the Cretan Ebony. He looked like a little golden sphere of sunlight in flight and he's rather eye catching even down here among the foliage. I'll see if I can hoik him out so that you can have a better look at him. Unfortunately their beautiful, iridescent wing cases (the result of varying numbers of stacked chitin layers scientists discovered a few years back1) has meant that they've been much prized in the jewellery world – hence their name. The old, old story I'm afraid; we don't consider ourselves particularly attractive, other animals are, so we kill them and adorn ourselves with the pretty bits. I still think that the wing cases look better on the beetles than on fop's finery. I've even seen them sewn into a tea cosy for goodness sake. 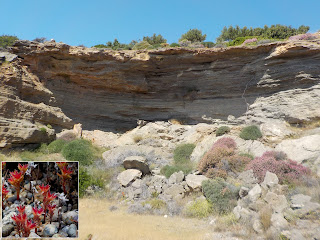 Enough grumbling about people's peccadilloes, we'll double back on ourselves and see what this grass bowl has to offer. Whew! This is quite a sun trap. Not much moving down here but the occasional grasshopper so I suggest that we move into the shade of that overhang (praying that we don't have an earthquake in the meantime). These are curious little red flowers growing up through the gravel. They are Stonecrop, hardy little plants that store their water in succulent leaves prior to flowering. This particular one, for the botanists among you, is Coastal Stonecrop (Sedum litoreum var. litoreum). It's getting hot again, even in the shade, let's continue along the track and see if we can find somewhere cooler to rest awhile. Ideal, an old hillside hovel. The area is littered with these relicts with their built-in fireplaces and storage niches. This one still has its roof more or less intact but the floor doesn't appear to have been swept for a while. Nice places for spider hunting and we have a representative of my favourite family here; the salticidae or jumping spiders. They're easy to recognise, not only by their way of running (in short, jerky hops) but from their eye pattern which you can see if you look at his head under the hand lens. The jumping spiders have two small eyes set well back on the top of the head, either side of that black band, as well as the six forward facing eyes. Each spider family has its own distinctive eye pattern and this is theirs.

Next week we'll trundle off down the hill and if this heat keeps up we'll soon have to think about getting under the waves once more and meeting up with our fishy friends again. 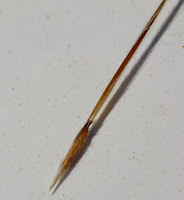 We've spent a fair bit of time recently walking through wild oats and you will have undoubtedly noticed their method of seed dispersal. They spear any passing large animal (like us) with a very sharp and cunningly barbed javelin in the hope that we will transport the seed to a new and favourable location. Having stopped every quarter of a mile or so to rid ourselves of these painful adherents we have completed the job to the oats' satisfaction if not exactly to our own.