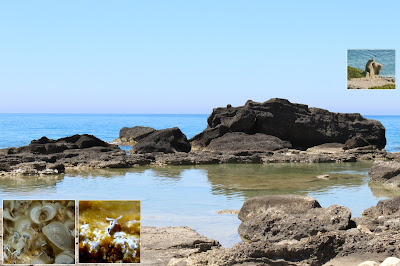 Here we are at Rodinesque Point, a lovely set of rock pools that never fail to  throw up some curious creatures. Before we plunge in though let's have a look at some of the algae that are growing on the rocks. The larger ones are called Peacock's Tails which you may remember we met in the Blue Lagoon; the ones used in anti-wrinkle cream. The ones that look a bit like satellite dishes on stalks are Mermaid's Wine Glasses and both are considered a delicacy by the pretty little sea slug, Elysia timida, which lives around here so keep your eyes peeled. Incidentally you won't find Rodinesque Point on any map, it's a name I've given the area because of that weird rock formation on the headland which looks as though it has been sculpted by Rodin. 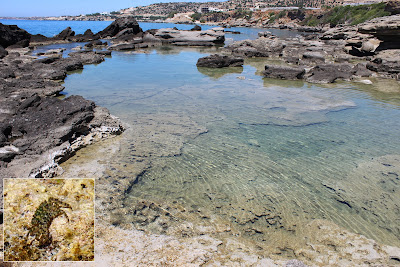 This looks like a nice place to slither in. Just a note on underwater photography in shallow, rocky waters; if you're using a small camera like this Nikon Coolpix hold the lens in the palm of your hand to protect it. Note two; when getting into the water don't flop on a crab – they don't like it and they have a pair of pincers to prove the point. The one that you just missed down there is a Marbled Crab, probably out looking for a spot of lunch. An omnivorous little fellow eating mussels and limpets and a similar amount of algae but not above snacking on other marbled crabs. On the other hand he has to look out for the occasional marauding gull swooping in from above, the Musky Octopus coming up from below and other marbled crabs of course. 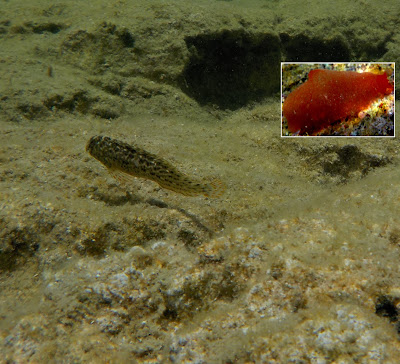 We'll slide ourselves into the water and see who else is at home. We seem to have disturbed a Goby that has taken off like a rocket. They like to settle, well camouflaged, in the coarse sand and wait for lunch to come to them. They are particularly partial to those little amphipods that we saw last week so I'm told. But what have we here under this rock looking like a miniature orange dolphin? This is a Sea Squirt and they feed in an entirely different way. They suck water in at one end, filter the plankton out through internal gills and then expel it through the other end. It must be an exhausting job because they process their own body volume of water once a second which by anybody's reckoning is knocking on a bit. 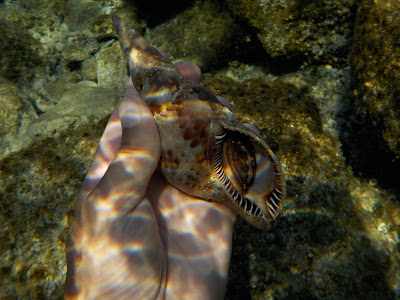 This next pool is a bit deeper so let's see what we can find in here. Now this has to be our find of the day so far, how's that for a mollusc? It's bigger than my hand. Time for a bit of Greek mythology. The Greek god of the sea is Poseidon and he is married to the Greek goddess of the sea, Amphitrite. They have a son called Triton who acts as his dad's herald. Both Poseidon and Triton carry tridents but Triton has a special implement for calming or rousing the waves (as well as general heralding) in the form of a large twisted conch shell. This is it: Triton's Trumpet – give it a blow, he won't mind. Oh sorry, I hadn't noticed that it was still occupied. It also works better out of the water, come to think of it. 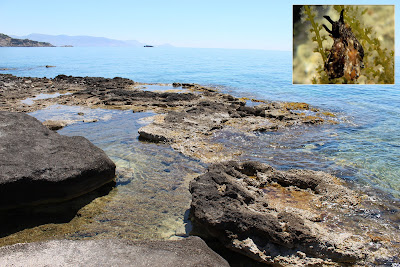 If we squeeze through this narrow channel we'll find some less protected waters bordering on the open sea. The best way to explore these is to get out and sit on a rock and gently probe through the algae with your fingers and toes. Now that even beats Triton's Trumpet; a trio of Spotted Sea Hares. Note the 'ears' which give them their name. They are a type of sea slug and as such they are hermaphrodite, being both male and female at the same time. When it comes to mating time they form chains like this and they advertise the orgy by releasing a cocktail of pheromones into the water. Scientists in Galveston, Texas (who obviously have a waggish sense of humour) have identified four of these pheromones and named them Seductin, Enticin, Attractin and Temptin [1]. I take my snorkel off to them.

Jeremy the Vine Hawk Moth is still pupating so I can think of no better way to round off than just watching the sea hares making more sea hares.