In The Quietest Moments 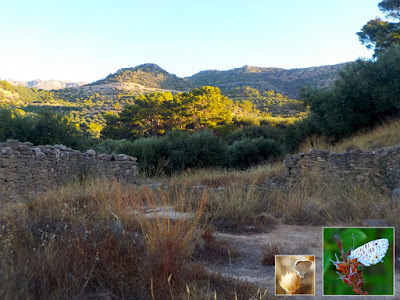 Last time we were out and about we finished up being bitten to death by Stable Flies in an old stone structure but I couldn't tell you anything about the origins of the building. Today we're going to start off in a similar structure a little way down the road (but without the flies). These structures are about two and a half metres long by two wide, square at one end with a cut out that suggests a large pair of doors once stood and rounded at the other. I now think that I know what they were: Venetian windmills [1]. The Venetians held Crete from 1205–1669 and these milotopi, as they are called, were one of their legacies. This morning though, the dried grasses poking up through the floor are proving of great interest to some small, pale insects flitting about in the morning sun. Sweep net time.


I didn't catch one but I did get one of the small blue butterflies; the rippling waves, two eye spots and double tail protruding from the wing are enough to identify it as a Lang's Short-tailed Blue, Leptotes pirithous (named after the 19th century British lepidopterist Henry Charles Lang). Like most butterflies in the Lycaenidae family it is small with a wingspan of 3cm at most. However I see that you have caught one of our small, flitting insects and lo and behold it is a not dissimilar looking butterfly but it's absolutely minute. If I sit him on my thumb his wings wouldn't reach to the edge of my thumbnail even at full stretch. It's a Grass Jewel, Chilades trochylus which, in Europe, you'll only find in Greece and on some of the Greek islands such as here on Crete and, not surprisingly given its general appearance, it is a diminutive member of the same family. 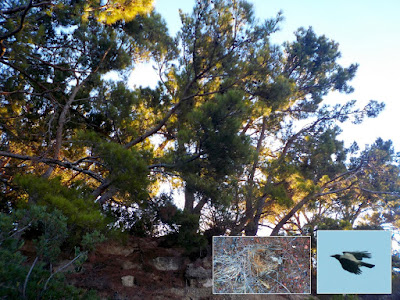 Let's go out through the doors and investigate those pine trees in the middle distance. It looks like someone has built their house on windy ground as there's rather a large nest on the floor here that seems to have been dislodged from the branches above. The construction of a nest can often tell you a lot about the architect as all birds have their own methods of nest building passed down from generation to generation. This one starts with a substantial base of interwoven large twigs in the centre of which a nest proper has been woven out of dried pine needles. This has then been lined with softer material, sheep's wool by the looks of it. Very comfy. Back in the early spring that would have held up to six, brown speckled, blue eggs for it is the nest of the Hooded Crow. 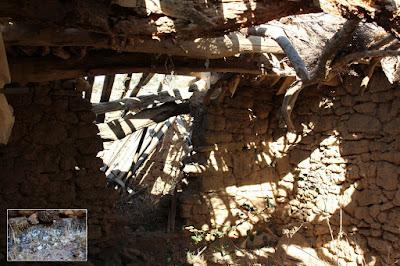 Interesting though this little gully is we are now heading in the wrong direction so lets go back to the track and see what else we can find. Some dilapidated old dwellings – they're always good to poke around in. Oops, someone's home, it was a mouse I think (too small for a rat). I noticed a hole outside with a fair amount of debris around it so we'll take a look at the midden and see if it can tell us anything about the occupant. Firstly it has an inordinate fondness for snails by the look of it. There are a couple of rodents on the island that I know eat snails: The Wood Mouse, Apodemus sylvaticus and the Broad-toothed Field Mouse, Apodemus mystacinus and the rats, black and brown, are omnivorous so they can't be ruled out. We also have a couple of species of Hedgehog, Erinaceus concolor and Erinaceus roumanicus who are partial to the odd snail or two but unlike the European Hedgehog they tend to build grass nests. There is also the endemic Cretan Least Weasel Mustela nivalis galinthias which is known to live in the walls of derelict old buildings such as this. However, he's more likely to eat the small rodents rather than this amount of snails. Finally we have three species of Shrew, two of which are possible contenders (the third, the endemic Cretan White-toothed Shrew, Crocidura zimmermanni lives only in the high mountains). What we really need at this point is the naturalist's old favourite; some pooh, but I've scoured the surrounding area and there's no sign of a scat anywhere. My money is on one of the mice, particularly as we've just seen one, but the evidence is purely circumstantial. 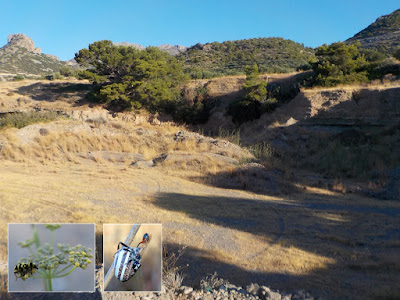 Behind the house we have some sun scorched grassland but down in the shady hollow there is still some fennel in flower which may still hold some late morning activity so lets go and take a look. I see we have our new beetle friend, Chlorophorus varius. That makes three sightings in three outings. Either he's very fond of us or there are a few of them about. Now this is interesting, what on earth is that Mud Dauber Wasp doing with that Chocolate Banded Snail? Mud Dauber Wasps have a tendency to be quite prey specific, provisioning their young with moth and sawfly caterpillars in the case of Ammophila species, grasshoppers for Prionyx species, spiders for Scleriphon species and Crickets for Sphex species. I have never heard of a mud dauber tackling a snail. Maybe it's not a mud dauber at all but another insect imitating a mud dauber? It won't be the first time I've been fooled (nor will it be the last). Ah well, your thoughts in the comments box as usual please -like all naturalists I'm always ready to learn something new. 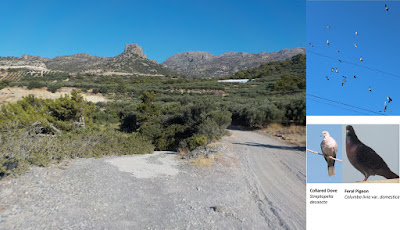 I'm on safer ground now; those are definitely Feral Pigeons flying overhead. Twenty four of them which is good news. Three years ago I told you that “we used to have a regular flock of 17-18 Feral Pigeons and one pair of Collared Doves. Last year the flock was down to 14 and we had two pairs of Collared Doves.” (See Hey Hay!) Now, as you can see we have two dozen in the flock of feral pigeons and we're back to the one pair of Collared Doves plus another male chancing his arm (or wing I suppose). In Ierapetra however, I didn't do a count but it seems that the Collared Dove has almost fully replaced the Feral Pigeon and they've certainly taken all the best nest sites around the hospital. This is happening all over the northern hemisphere, particularly in urban areas. For instance in the UK there were an estimated 3,000 breeding pairs of Collared Doves in 1964. In 2008 there were just short of 300,000 breeding pairs. In the USA less than fifty escaped from captivity in the Bahamas in 1974. They can now be found in virtually every U.S. State as well as Mexico. However, the Feral Pigeon seems to be holding on – for the moment. And now I see that our paths are diverging. I think we'll take the left one and make our way back down the hill next week. But for now let us be content to sit a while and enjoy a quiet moment or two just drinking in the wonders of nature that surround us.

In some respects we're quite up-to-date in Ferma – we even have wall art! I found this lovely depiction of a butterfly on the whitewashed wall inside one of those derelict buildings.