We'll continue to make our way northwards today and gradually drift eastwards as we approach the zenith of our circular tour. I have found, in the thirteen years I've been on the island, that Crete has very distinct changes of seasons. Soon after the autumn equinox, clouds begin to make their way back, nervously encroaching upon the wall-to-wall sunshine and blue skies of summer, and eventually the rains will come. This valley to our right is the perfect place to admire the acres of sky above us and there's a rocky outcrop just here where we can be monarchs of all we survey so let's get out and do a bit of rock scrambling. Magnificent view isn't it? But look what I've found nestling in between the rocks at our feet. The first Autumn Crocus of the year. This is the earliest that I've seen one, my previous observations have been three or four weeks later in the year. 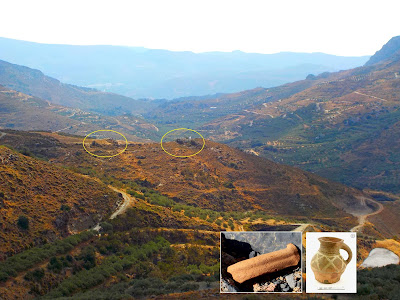 Hello, what's this? It appears to be a pot handle of some kind. I've no idea how old it is, it could be Minoan, Roman or made last week. I shall have to take it home and show it to a lady I know who's potty about such things. I'll let you know when I find out a bit more about it. Meanwhile we may or may not have a clue in the landscape. If you look down there to our left you can see a pair of incongruous outcrops. These are the remains of a hill fort called Monte Forte (which, rather unimaginatively, is Italian for Hill Fort). It was built early in the 13th century when the Venetians held the island and spent about a hundred years amusing itself by being occupied and reoccupied by opposing forces before an earthquake put a stop to all that malarkey in 1303. It was rebuilt in the 14th century but no-one seemed to have a use for it and it gradually fell into rack and ruin. Whether or not this has anything to do with our pot handle I'm not sure but the Museum of London is in possession of a jug of similar vintage, the handle of which looks remarkably similar (to my untrained eye at least).

Enough of the history, let us carry on to Paraspori and have a look at these springs and see if we can find some wildlife. So, this is the spring, set in a pleasant picnic area shaded by massive plane trees and I've found someone rather interesting on this stone wall. Most shield bugs, and this is one, are not renowned for being particularly attentive mothers; they lay their eggs in little cases and then wander off and forget about them. This one however is called the Parent Bug and she will look after her offspring, carefully rounding up any adventurous individuals with her antennae, right up until the third instar (which roughly equates to our teenage years) when she will allow them to move off in small groups to forage for their favourite foodstuffs which is the sap of various trees. After that they gradually disperse. 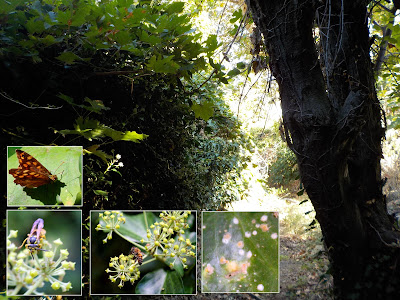 There's a little path leading down from the picnic area with a rather fine Ivy hedgerow alongside it. Ivy is very important at this time of year as it is coming into flower when many other plants are still waiting for a decent drop of rain and as you can see the wasps and bees are loving it. There's a Speckled Wood butterfly flitting about as well and some tiny white blobs that one may not immediately recognise as insects. These are Oleander or Ivy Scale Insects (Aspidiotus nerii) which attack both plants as well as palms and citrus trees among others. These are females and they will remain attached to the leaf beneath these waxy plates and give birth. The males, having done their job, fly off and die within a couple of days so they are rather more difficult to spot.

Now, what do we have on the floor down here? An early fallen orange covered in a blue/green mould. Moulds are part of the fungi kingdom and are very important (though not always welcome) in the decay cycle of an ecosystem. This one is probably Penicillium digitatum (although it may be P. italicum they are very similar) and it lurks around in the soil of citrus growing areas such as this just waiting for the fruit to fall. It only needs a small chink in the fruit's waxy armour and it's in to the rich juices inside. Once there it reproduces millions of times, sending its thread like mycelia throughout the interior and producing its own spore filled fruits on the outside. The spores, when they hatch, are carried by the air; some to fall upon the soil and some to adhere to undamaged fruits. For this reason great care has to be taken when harvesting and handling the fruit because if it is damaged in any way then they're in like Flynn once more. These microscopic fungi are responsible for 90% of citrus fruits lost to infection after harvesting which is not good news for us but without them, then in the natural order of things, the nutrients bound up in the fruit would not be returned to the soil and it would soon become impoverished. Rot and decay isn't pretty but it is essential and a major part of the autumn season.

A couple of weeks ago we were debating whether we had found signs of a meteor strike. I am indebted to Chad Johnson at Learning Geology for showing me that this type of geological feature can be caused by the natural erosion of a dome. Thanks Chad. 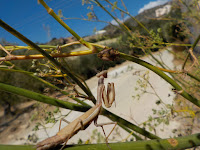 Do you remember the mantis I found eating a shield bug last week? Well she's still sitting motionless in the same patch of fennel a week later apparently having moved no more than a few inches in the entire week. I haven't seen any more potential prey items on the fennel so she's either been snaffling them while I haven't been looking or she's getting very hungry. As her scientific name is Iris oratorio I've taken to saying “Good morning Iris” to her when I go out (much to the consternation of my neighbours who are wondering if they should send for the man with the straitjacket).