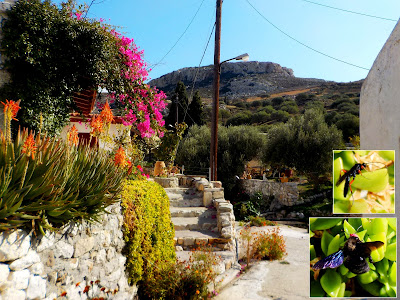 From Voila we'll make our way back to the main Sitia-Makrigialos road, travel south for a bit and then take the turn off for the village of Perivolakia. We could take a left at Etia and cut across country but I'm none too sure about the road surface and I'm a coward. Sometimes this village is spelt Perivolakia (which means pergolas) and sometimes Pervolakia (which means rooftops) and we have one of each on the left here. We also have a cascade of Mesembryanthemum flowing down this wall being pollinated by a couple of Hymenopterans. The big purple/black one is a Carpenter Bee and the little black one with the red legs is an Ichneumon Wasp. These wasps lay their eggs in the larvae of other living insects which troubled Charles Darwin somewhat. In a letter to Asa Gray, an American naturalist who spent much of his time promoting the idea that God and science were not mutually incompatible, Darwin wrote “I cannot persuade myself that a beneficent and omnipotent God would have designedly created the Ichneumonidae with the express intention of their feeding within the living bodies of Caterpillars”. It all depends upon your interpretation of “God” I suppose. 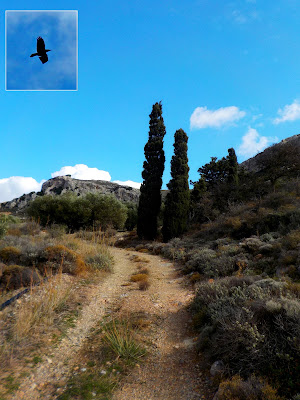 The path that we're on leads eventually through the Per(i)volakia Gorge to the Kapsa monastery and is waymarked with red arrows apart from at this little gully where it isn't. Which shall we take; left, right or centre? Middle for diddle? That was lucky, a little red arrow about twenty yards up the track (well, the Cretans did invent the labyrinth). I think we'll just go as far as those Cypress trees up there and have a scrabble around. Can you hear that Raven cronking away to our right somewhere? There he is, announcing our presence to all and sundry. Incidentally, the Cypress tree is named after Kyparissos, one of Apollo's boyfriends who accidentally killed his pet stag. Overwhelmed by grief he turned into a Cypress tree. Not a common occurrence, even in ancient Greece. 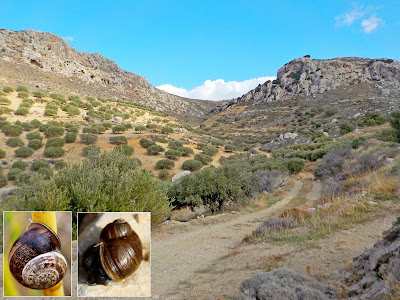 That was quite a hill that we just climbed so I think we'll rest by the wayside and take a look under a few rocks while we get our breath back. A nice couple of snails here, the two-toned job sitting on the fennel stalk is a Chocolate-banded Snail, Eobania vermiculata. The vermiculata part means noodles. Apparently the shell pattern reminded its discoverer of vermicelli which goes to show that you should never ask a malacologist to name something just before lunch. The other one is a Green Garden Snail which are collected from the wild in these parts at this time of year when they are most active. We humans have been roasting snails and eating them for over 25,000 years and it wasn't the French who started the trend in Europe but the Spaniards (or least-ways the Homo sapiens who were living on the Iberian peninsula at the time 1). 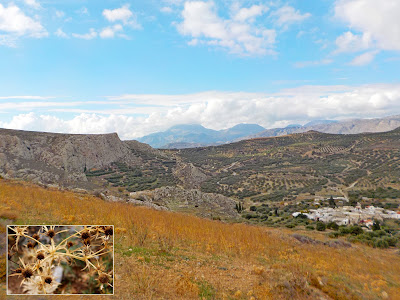 Having found our snails we could do with a few vegetables to accompany them so how about some asparagus? As you go trampling over this golden hillside in search of it (which I doubt you'll find) you are crushing beneath your feet a perfectly acceptable substitute. This is Field Eryngo and, although it is the young shoots that you can use in place of asparagus, the roots can also be cooked as a vegetable and in addition you can candy them for dessert if you wish. That's lunch settled then. Looking down the hillside you can see the rooftops of the village so I think that Pervolakia without the 'i' is probably the more appropriate name. 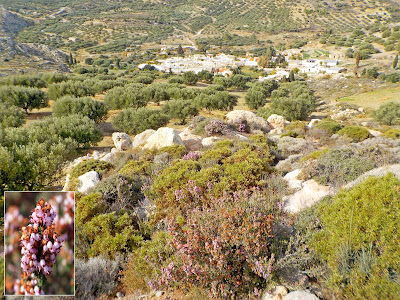 Let's walk back down over these heather covered rocks until we regain the track once more. I have read tales recently of rather aggressive so called 'gypsy' heather sellers in the UK chasing people down the street trying to force their foil wrapped sprigs of lucky purple heather onto people. Here is a quick answer to them: “It's the wrong colour”. Purple heather is no more lucky than a three leaf clover, it is white heather that is supposed to bring good luck. The origin of the superstition is Scottish where it is purported to grow on ground where no blood has been shed. Given the country's bloody history it is somewhat scarce. An alternative derivation from that same country is that it grows over the final resting place of faeries but that's just heaping one myth upon another. Here in Crete we have two species; this pink heather, Erica manipulaflora, and the Tree Heath (which is white), Erica arborea. Scottish heather by contrast is Calluna vulgaris which is predominantly mauve with the occasional white variation. So you can tell your 'gypsy' charm seller that if she'd care to pop up a Scottish ben and get you some lucky white heather you'll consider buying a sprig. 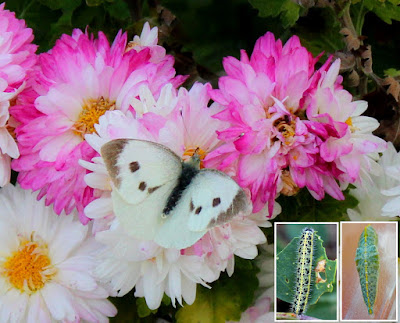 Back down in the village the taverna has a colourful display of pot plants and on one of these we have a Large White butterfly, Pieris brassicae. You may recall that a couple of weeks back in Sklavoi we came across some of her caterpillars feeding on a caper bush, Capparis spinosa. I mentioned at the time that although they preferred Brassicas they had quite a range of food plants. I am indebted to Antonia Aga at Butterflies & Moths of Greece & Cyprus for alerting me to the fact that this is a new host plant observation for this species and a check with the World's Lepidopteran Hostplants Database at the Natural History Museum of London confirms this. Which just goes to show that there are new observations to be made even with regard to such commonplace insects as the Large White butterfly. 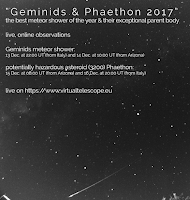 For the stargazers among you there is quite a lot going on this week. If you venture out after midnight tonight (13th) you can observe the Geminid meteor shower. Just before the dawn you can see Jupiter and Mars between the Moon and the Horizon and on Saturday evening, with the aid of a small telescope, you may be able to see the rock-comet 3200 Phaeton. http://earthsky.org/astronomy-essentials/3200-phaethon-rock-comet-how-to-see