A Nose For Navigation 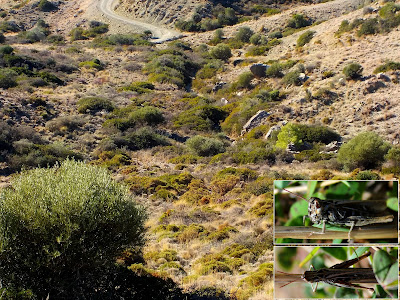 Last time we were together we finished up looking at a dead grasshopper so this week we'll start with a live one. We're very much in grasshopper territory here and this is our local version of the Meadow Grasshopper, Chorthippus bornhalmi. Crickets and grasshoppers are well known for their songs and it is a common myth that they sing by rubbing their legs together. Almost true. Generally speaking crickets chirp by rubbing their wings together whereas grasshoppers rub their wings against their legs. I see that there's an old stone bridge down there crossing a small gully that gets considerably deeper as it heads southwards. Definitely worth investigating methinks. 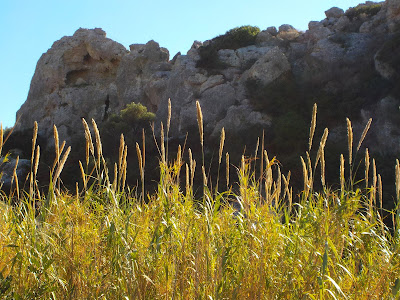 The gully seems to be running into a bit of a ravine which is absolutely inundated with Giant Cane. Despite its massive height it is, like bamboo, a type of grass. Also, like bamboo, the young shoots are edible and you can eat the boiled rhizomes apparently. I haven't tried it myself and I've never seen any recipes for it (so I'd be inclined to take that information with a bit of caution or maybe even a pinch of salt) but I'll pass it on anyway. It also looks fairly impenetrable but we won't let a little fact like that put off intrepid explorers like us. I'm sure that we can slide our way through somehow. 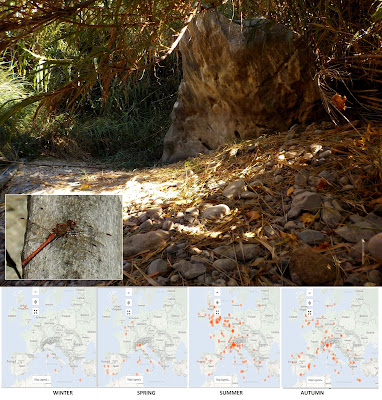 OK so they were pretty unforgiving but look who's waiting for us; a Common Darter. Only he's not so common, not at this time of year anyway. It's a fairly recent discovery that certain dragonflies migrate, the same as birds do [1]. And how do we know that? Because some fool entomologist managed to fit a dozen of them with the world's smallest transmitters and follow them in a light aircraft for 58km over six days. Research is ongoing and I'll put in my fourpenn'orth with this set of seasonal maps which I've put together from iNaturalist. As you can see you'll only find them in Winter around the Mediterranean. By Spring they're up as far north as the Netherlands and in Summer and Autumn they're in Scotland and Denmark. 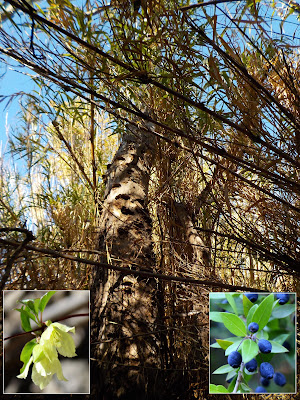 You may have noticed that these canes are getting thicker and I'm beginning to think that someone should have put an electronic transmitter on me as I'm not sure which is our best route out of here. Meanwhile we have some pretty little Clematis cirrhosa down here which is quite, quite poisonous (see Entrapment In A Virgin's Bower) and some Myrtle berries, Myrtus communis, which are most definitely edible (see Fly Feet And Lizards' Ears). All of which is rather academic at the moment as we seem to be effectively caged in on all sides and we've traced a tortuous and probably unretraceable route to get this far. All is not lost however as I am indebted to Phil Bebbington who sent me this handy little GPS tracker for our travels. As I've been marking our finds as we go along I should at least be able to track our route back by following the trail of breadcrumbs as it were. So, if I just pick the appropriate screen I get a picture of... what appears to be an earthworm in its death throes. Our route has been more circuitous than I thought. Another feature of this little gizmo is that we can combine our current position with satellite images which means, in theory, that we can see our shortest route out. I say 'in theory' because I haven't yet mastered how to do that yet. I can tell you where we are to eight decimal places of latitude and longitude but that's not exactly helpful at this moment. We will have to rely on the old naturalists' trick of escaping from river gullies: proceed in any direction you like so long as it's up. 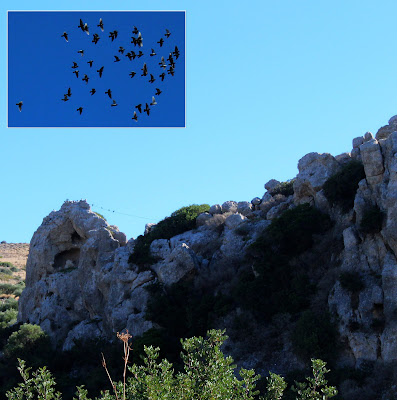 It never fails and we seem to have emerged on the same side of the gully as we entered which is a bonus. There's a whole flock of feral pigeons sitting on a telephone wire over there and I swear that they're laughing at us. Ignoring the incongruity of a telephone wire stretching over a pinnacle of rock and dangling down into an inaccessible cave (this is Crete and it's best not to dwell on such conundrums if you wish to preserve your sanity for any length of time), the reason the pigeons are laughing is that they don't get lost in cane breaks. Exactly how they manage to navigate long distances is still under investigation but if, like me, you thought that it was all down to reading the Earth's magnetic field and/or following the sun's arc then you'd be wrong. Both are useful as compasses but not much cop if you don't know where you're heading for. Like ourselves in the cane break, without a satellite image to see where we were in relation to the edge of the canes, knowing our latitude and longitude and the direction of north was of no help. You need a map and so do the pigeons. After forty years of research[2] it would appear that your homing pigeon probably uses olfactory mapping as a primary navigation tool. They know what home smells like and if you take them to a new location they'll sniff their way back. And on that incredible note I think we'll make our way back. Can anyone smell the car?

On the subject of navigation I would propose a study of island postmen. Here on Crete the smaller villages have no road names and no house numbers. If, like Phil Bebbington, you are kind enough to send me a piece of equipment that you have finished with and pay extra for parcel tracking then the Post Office will hand over delivery to a courier. This means that it will eventually arrive in the near vicinity of my home, having travelled across Europe in ever decreasing circles, and after a flurry of telephone calls I will retrieve the package from an exasperated man in a little white van from outside the village shop. Pop it in the regular post and my postman will (almost) invariably deliver it to my door a week or two later. How he memorises where everybody lives is a feat worthy of scientific investigation.

Thanks again for the GPS Phil, it really is a most appreciated gift and I will get to grips with combining it with satellite images!

[1] Dragonflies Migrate Like Birds
[2] How Do Homing Pigeons Navigate?

Many of you have asked me what photographic equipment I use so for details of aperture settings, shutter speeds etc. my pictures will be on Flickr within a few days and that has all the geeky stuff. Pictures were edited with FastStone Image Viewer and combined with Microsoft Paint.