The Problem With Icarus 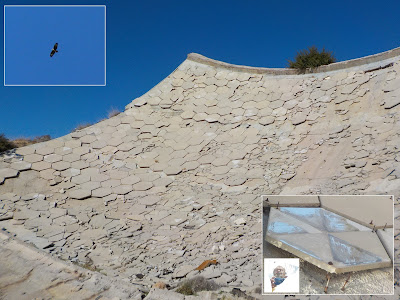 A beautiful sunny start to 2018 and I wish you all a Happy New Year. The other day I passed the back of a curious concrete structure south of Lithines and I decided to stop and walk around to the front of it. Here it is, come on I'll show you. Once upon a time these hexagons were all mirrored which would have been a spectacular sight for that buzzard up there. Despite looking like something out of a Bond movie, it was actually an early solar power experiment. Crete is no stranger to discovering the power of the sun of course. Back in the day an engineer called Daedalus was imprisoned on Crete with his son Icarus by King Minos. In an ingenious escape plan Daedalus made wings of feathers and wax for the pair of them. Icarus flew too close to the sun, the wax melted and he fell back to earth with a splat. Actually both Icarus and the story crash at this point because the higher you fly, the colder it gets. Far from melting, the wax was more in danger of icing up. The result would have been the same of course.

Many animals shun the heat of the Cretan sun by hiding under rocks and with so many of these hexagons lying around in the undergrowth I reckon we can have a flipping good day finding some of them. Lets start with a couple of myriapods and dispel a few myths about legs. As children we were taught that centipedes had a hundred legs and millipedes a thousand (and their names reflect this). Neither fact is true. Myriapods, the group to which they belong means ten thousand legs and that's wrong also. Centipedes can have anywhere between 30 and about 350 legs (this one has about 40) and even the most leggy of millipedes only has 750. Our curled up friend here has about120. In addition to this they grow to adulthood by adding segments and legs as they develop, starting with as little as three segments and six legs, so counting legs is not a good way of differentiating the two animals. The trick is to look at the arrangement: centipedes have one pair of legs per body segment, millipedes have two. 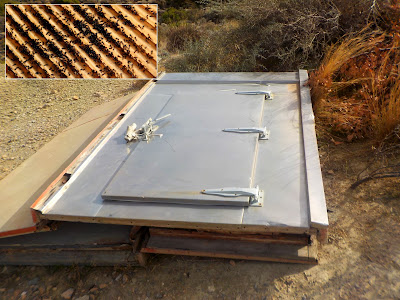 I don't know if you've noticed but there's a door in the floor over there which can only mean one of two things. It's either a portal to another dimension or a flat-pack fridge (I often wonder what IKEA do with ideas that don't quite work). Let's open it up and find out what lies within. Corrugated cardboard which seems to be of interest to hundreds and hundreds of ants. I wonder what they find so fascinating? When reading about ants one often comes across the prefix 'myrm' (people who study ants are myrmecologists, seed dispersal by ants is called myrmecochory and so on) and the words come from the Greek 'myrmex'. There is an ancient Greek myth regarding Aeacus and Aegina who grew up alone on the island of Aegina. Getting rather bored of calling out “Aegina” and getting the response “Are you talking to me or the island?” (which wasn't a very good joke in the first place but pales considerably after the hundredth repetition) Aeacus asked Zeus to provide a bit of alternative company. Never one to do things by halves Zeus turned all the ants on the island into men and women and they were known as the Myrmidons who later fought with Achilles at Troy. There is an alternative version in which the Myrmidons were supposed to have been descended from the son of Zeus and Eurymedusa whom he seduced whilst appearing in the form of an ant but that seems somewhat impractical on many levels, even for Zeus. 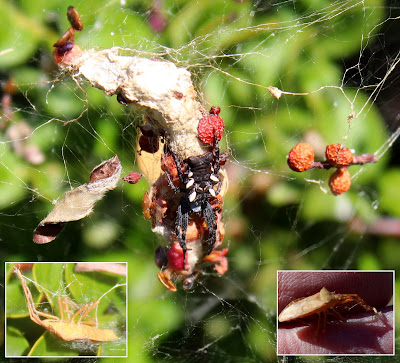 Moving on to this Lentisc bush for a moment we seem to have something interesting going on. The spider is our old friend Cytophora, the Tropical Tent Web Spider, going about her business of cocooning food trapped in her web. But I'm rather more interested in this little bug that she seems to be ignoring. If I just extract it and turn it over in my hand... Yes, despite the faded colours which indicates that it may have been trapped for some time, it is definitely Zelus renardii. This Assassin Bug, you may recall, is a newcomer to Europe having been discovered on mainland Greece in 2011and here on Crete by ourselves in 2014 (see Red Autumn). Now the question is, why has she not parcelled it up for later consumption? We'll have to keep our eyes out for further instances and see if this is just a one-off or a more general occurrence. 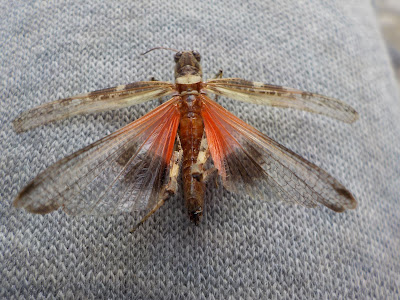 Whilst we're on the subject of dead insects I've just spotted a deceased grasshopper on the floor here. This is one of at least three types of bandwing grasshoppers with reddish wings on Crete which you normally see as just a flash of red, like a miniature firework exploding beneath your feet, as you walk through dry scrubland like this. It is only when they have passed on that you can get a chance to open up their wings and admire their exquisite tracery. The patterning also helps to identify the species. This one is the Slender Digging Grasshopper, Acrotylus patruelis.