Do you remember that old stone bridge that we crossed at Mirtos last month? The one where I suggested that whheelchair users would probably find it more practical to use the adjoining concreted ford? No longer; the ford was washed away last week in the fifth major deluge to hit our island this year. We have had more rain so far this year than the total rainfall for any of the preceding ten years.

I thought that we'd take a walk down to the cliffs today to see how Ferma, which lies between Myrtos and Makry Gialos, has fared. But as we wend our way down through the olive groves I'll try to explain what is happening and it is down to our old friend (or new enemy) climate change. Simply put, the temperature of the Earth is slowly rising but it is not constant around the globe. Here in south east Crete we are just under a degree celcius warmer than we were ten years ago which is much greater than the global average. Warmer air holds more moisture and it has a tendancy to drop this in torrential downpours. 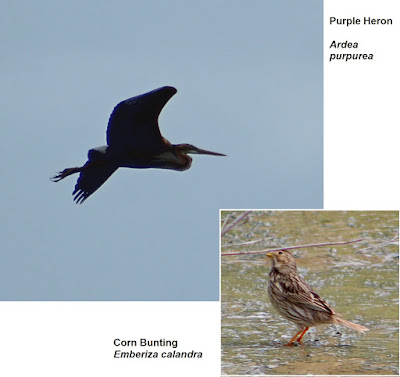 Somehow we seem to have missed the worst of it. Just a bit of extra water flowing down the gully which the birds are enjoying. There's a Corn Bunting down there look which I don't often see in these parts and, rarer still, a pair of Purple Heron flying over the sea. With all this fresh water laying around it seems strange that they should choose to come to the coast. Maybe they're spoiled for choice. And... I've just seen the first swallows of the year. They seem to be getting later, they used to turn up in the middle of March ten years or so back. 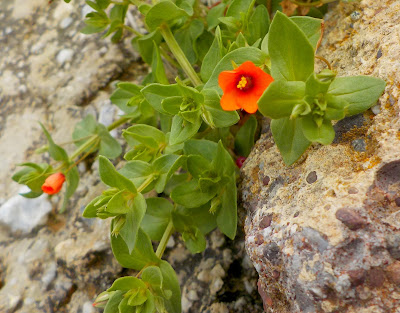 
Those Frenchies seek him everywhere
Is he in heaven or is he in hell?
That demned elusive Pimpernel”

Thus rhymed Baroness Orczy in her novel, The Scarlet Pimpernel. Well, here it is, the diminutive flower after which her hero is named. A toxic little weed (the flower, not the hero), particularly to livestock. Humans fed with experimental doses of the essential oil suffered intense nausea, headaches and bodily pain. The ancient Greeks used it as an antidepressant, presumably on the grounds that all that suffering takes your mind off your less tangible woes. 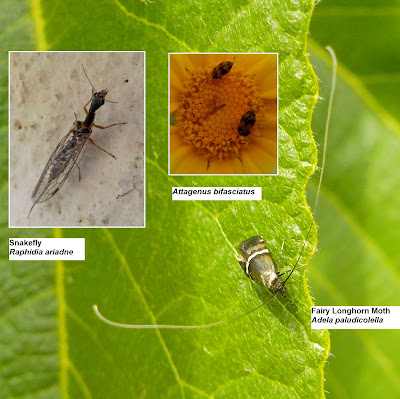 There are quite a lot of insects about this morning including these three which turn up regularly in the last week of March or the first week of April. The exact date is linked to conditions such as light levels and temperature, which determine when the flowers start to bloom and thus, directly or indirectly, when food is available. As such, you can use insects as a rough temperature guide. An American chap took this to extremes apparently and calculated that 40 + (the number of chirps made by the Snowy Tree Cricket in 14 seconds) = the temperature in degrees Farenheit. He obviously had a lot of time on his hands to come up with that particular piece of fieldcraft. 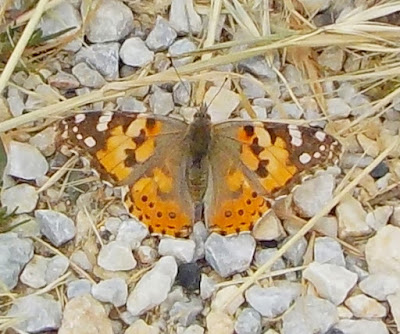 The Painted Ladies are still about but in lesser numbers and last week I sent a batch of specimens off to the Vanessa cardui migration project for DNA testing. The point of this, as with all studies of plant, insect and other bird and animal migrations is to spot changes in migratory behaviour. For eventually, where the wildlife goes so too will our own species. 'Climate Refugees' is a term that we will hear more and more in the years to come and if we can use our observations of nature to predict where and when human migration will occur then maybe, just maybe, the governments of the world can prepare.