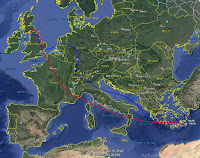 Those of you who were with me last year will recall my friends, Betty and Bert. They are what is known in the trade as 'a literary device'. They allow me to recall the actions and words of my true friends and family without fear of being ostracised, sued or generally marmalised. I met a number of new friends on my recent sojourn to the UK and back to Crete by train and ferry and would like to keep them (at least until they discover what I am really like). This is the story of that journey; through England, Holland, Germany, France, Switzerland, Italy and Greece, as seen through the eyes of a naturalist with Betty and Bert popping in to provide a bit of comic relief.

Nestling up in the north west corner of England, just above the Lake District and trying to pretend that it is part of it, lies the idyllic town of Cockermouth. It is a place where a walk to the health centre involves negotiating a flock of sheep and a trip to the supermarket is accompanied by earthy scents arising from the banks of a stream, and robins, wrens and blackbirds merely hop to one side as you pass. It is a watery place at the confluence of two rivers, the Derwent and the Cocker, which are joined by two streams (or becks in the local dialect). These have a tendency to get a bit above themselves at times, quite literally, which is evinced by the flood level markers of 2009, 2015 and 2017 all of which are unnervingly at eye level or above. There have been fifteen flood events in the town since they started recording such things in 1761. I'll let you draw your own conclusions from the fact that 20% of them have occurred in the past ten years.

As we walk down towards the town from the new homestead (the family seat just having moved up here from Gloucestershire), by the gurgling Tom Rudd Beck, I noticed the first of many plants that we don't have in Crete growing by the wayside. It is garlic mustard, Alliaria petiolata, a magnificent little herb combining the subtle flavours of both garlic and mustard in its leaves and flowers.

“That,” I say to Betty and Bert, who are trailing along with us this morning, “would be a magnificent addition to a great Cumbrian breakfast.” [See Steve's Wild Kitchen for recipe].

“Never mind breakfast,” grumbles Bert, “I had that hours ago. Aren't there any pubs in this town?”

The beck snakes under the footpath and disappears into dense woodland and we descend to another path along the banks of the Cocker which flows in from the fells and waters of the Lake District National park to the south of the town. There are plenty of stones standing proud providing good hunting grounds for dippers and wagtails and the occasional kingfisher darts from bank to bank in a flash of azure and russet.

At the confluence of the Cocker and the Derwent we stop and rest awhile. Bert's nostrils are twitching like an ant's antennae. Just behind us stands the venerable Jennings' brewery. Sitting here, it is hard to imagine that at the height of the floods the tree in front of us was half submerged in a raging torrent of water. Ignoring Bert's cries of protest we cross the Derwent and walk upstream until we are opposite the castle on the edge of town. In the long grass on the far bank and just out of camera range (which, as every wildlife photographer knows, is where all birds live), a pair of pheasants are feeding.

Although this is a holiday for me there are a few creepy-crawlies that I want to photograph for a book that I'm writing at the moment. This is one of them; it's a Stonefly. It is not, despite its name, a type of fly any more than a butterfly or a dragonfly is. It is a Plecopteran. The Plecoptera (Stoneflies), like the more familiar Lepidoptera (Butterflies and Moths) and Coleoptera (Beetles) is one of the fifty or so major groups of tiny creatures which we lump together as creepy-crawlies. Until you know to which group your specimen belongs you haven't got a hope of knowing what you are looking at. Which is why I am writing The Quick Guide To Creepy-Crawlies; you can find out to which of the groups your specimen belongs by making three or four simple observations in the correct order. [Click here to see a sample page].


Enough of the advertisements, I'm beginning to get as thirsty as Bert. We'll make our way back along Bitter Beck where the Elderberries, Sambucus nigra, grow in sweet profusion.

“Never mind the elderberries, is there a pub anywhere along this beck of yours?” demands Bert.

“There is, Bert, a very nice one, at this end so you won't have much further to walk, and it's very appropriately named fot its location.”

A quick note: as this blog is not specifically about CreteNature I shall not be promoting it on the usual sites. Click on the hamburger (illustrated left) which you will find in the top left corner of this page, fill in your email address and you will be notified each time that a new post is published. (If you don't see the hamburger icon then you may have to click on the white back arrow first) Thanks, Steve.

Steve's Books (well, just the one at the moment but 'The Quick Guide to Creepy-Crawlies' is well under way and should be available later in the year).