Let me take you back 500 million years. Crummock Water, now one of fourteen beautiful lakes in The Lake District, was on the sea bed, a bed made up of sand and black, glutinous mud. Since then, that sediment has been squeezed, scunched and uplifted (and continues to be so) to form the fells that surround the lake, in this, the oldest part of the National Park. To the south of this are the eroded outcrops of hard lavas and ashes formed as a result of catastrophic volcanic eruptions 450 million years ago. It is here that you will find the highest peaks including Scafell Pike, England's highest at 3,209 feet (978m). To the south of this lies the gentler sedimentary rocks of southern Lakeland. These mudstones, sandstones, siltstones and limestones made up of billions of crushed seashells were formed upon the sea bed around 420 million years ago. The result is an area of truly outstanding natural beauty. 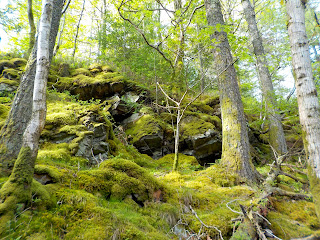 Let us take a walk around the woodland at the edge of the lake. It feels primaeval with its moss covered rocks and trees where red squirrels scamper around in the canopy and warblers and finches sing from unseen branches. Rows of bracket fungi adorn fallen branches and down by the water's edge bilberries are just starting to form. Look at the mosses more closely and you can see that the moss growing on the rocks (Thuidium sp.) and the moss climbing the trees (Hypnum sp.) are entirely different, occupying, as they do, completely separate ecological niches. 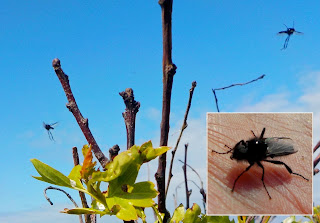 We'll track north now to Allonby Sands, a long, sandy beach on the edge of the Solway Firth. It is the middle of May and the Hawthorn bushes up on the dune ridge are just coming into flower. Floating all around them, long legs trailing, are the Hawthorn flies (Bibio marci). These harmless little insects (they don't bite) have a tendency to hatch in large numbers on or about the 25th April – the males sometimes about a week earlier – which is St. Mark's Day. This gives them their alternative name of St. Mark's Fly. Having completed their mating cycle many of them finish up on the surface of lakes, rivers and streams where they provide a seasonal bounty for the fish. 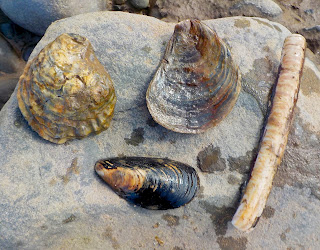 Coming down onto the shoreline and peering into the rock pools (or guddling in the local dialect) we find a treasure trove of shells of edible molluscs; oysters [top], mussels [bottom] and razor shells [right]. Unfortunately the original inhabitants of these shells are no longer present so no 'Allonby Chowder' recipe this week. It's a dish more suited to the depths of winter so, maybe on our next visit. And we must include smoked kippers! Around the turn of the 18th century, the village of Allonby was the centre of the local herring fishing industry, salting and packing the herring in barrels and kippering them in the smoke house. 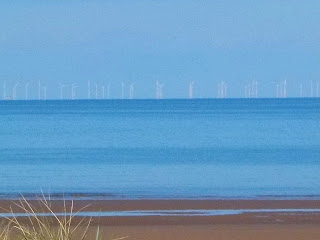 From the remote geolical past, through more recent history, we come to the present. Out beyond the shoreline, where the oystercatchers, knots and dunlin probe the sands for their lunch, lies the Robin Rigg offshore wind farm. Sixty 260ft (80m) high towers with four 144ft (44m) blades apiece turning at an average 170 miles per hour produce enough electricity to power half the houses in Cumbria. There are concerns of course. You can't plant a forest of turbines in somewhere like the Solway Firth without shaking it up a little and the ecology is being carefully monitored. But, whichever way you look at it, it means a heck of a lot less fossil fuel has to be burnt to keep the lamps lit over half the county.


Steve's Books (well, just the one at the moment but 'The Quick Guide to Creepy-Crawlies' is well under way and should be available later in the year).)