A Little Drop of Paradise 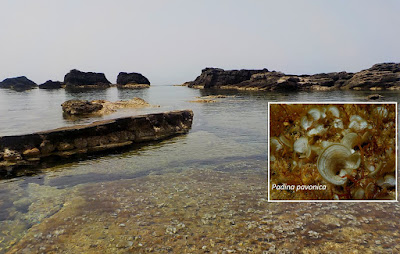 The temperatures have soared over the past few days, from a somewhat pedestrian 18ºC up into the mid thirties. There’s only one thing to do at a time like this: head for the sea. So let’s take ourselves down to Ferma Lagoon and see what we can find.


Before we plunge in, we’ll just take a look at what’s beneath our feet, to whit, a large expanse of Peacock’s Tail, Padina pavonica. You could make your own anti-wrinkle cream with this; the ‘with PPE’ which you see on some products stands for Padina pavonica extract. Just whisk it up in a jar of snail slime (a popular base with the cosmetics industry), put a pretty label on it, and slop it on your chops – if you can bear to, now that you know what’s in it! 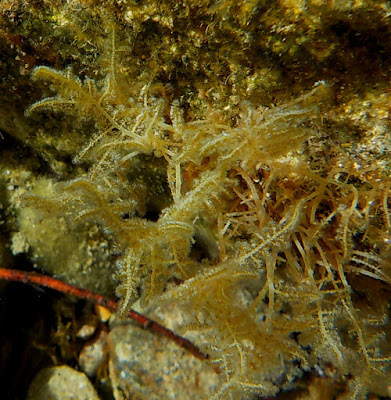 In amongst the Peacock’s Tails (which are brown algae, but don’t particularly look like it), are these brown fronds (which look like brown algae but possibly aren’t). These, I think, are Hydrozoans, animals related to jellyfish, corals and sea anemones. It is a colony with hundreds of individuals (the silvery-white bits) growing from the main, branching structure. A bit like houses on a housing estate. It’s either that, or some sort of red algae trying to confuse me. This sun is getting rather hot now, so let’s go and meet the fish.

The sea feels a bit warmer now, compared with a couple of weeks ago, but the temperature difference between the water and the sun-sizzled shoulders is still enough to cause a sharp intake of breath. 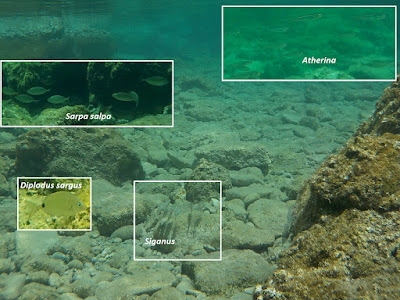 So, who’s about? Just beneath the surface, the tiny Sand Smelts, Atherina sp., are careening about. The larger ones are powdered with flour and dropped into hot oil in Mediterranean cuisine. Down in the middle layers we have one fish that is good to eat and a shoal which is possibly wisest to avoid in a restaurant setting. Diplodus sargus is the White Sea-bream, a close cousin of the Common 2-banded Sea-bream that we met a couple of weeks ago, and makes good eating. Sarpa salpa, the Salema Porgy, on the other hand, can cause hallucinations when eaten, even (rarely) with fatal consequences. See The Mind Blowing Dreamfish. Down at the bottom we have a small shoal of Siganus, or Rabbitfish, so called because of their rabbit-like mouths. These are Indian Ocean fish that have come up into the eastern Med. via the Suez Canal. 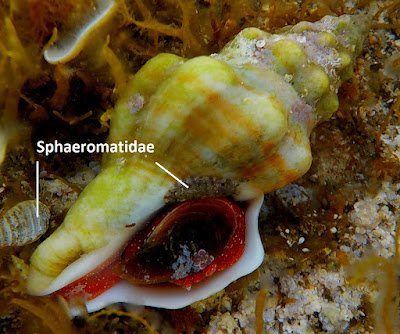 Ah, here’s something a bit different. Ignore the shell for the moment and look at the two little animals crawling around it. These are Marine Pill Bugs, of the family Sphaeromatidae. These are Isopods, an order which includes the more familiar Pill Bugs and Woodlice that we find on land. This is the first time that I’ve encountered their marine brethren. 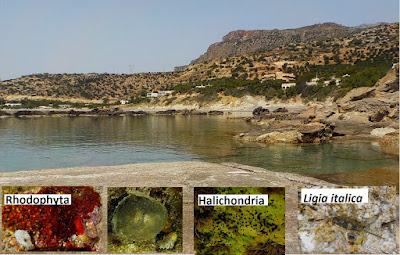 As we sit back and dry off, looking over the tranquil Ferma Bay, with the outcroppings of the Thriptis mountains in the background, I’ll just introduce you to a few more friends that I noticed on the swim back. On the underside of a flat slab of rock, the red algae, Rhodophyta, are establishing themselves. I’m not sure about the grey, glutinous blob; it looks like the egg sac of a lugworm, Arenicolidae, but the substrate is not particularly sandy, which they prefer, so the jury is still out on that one. The yellow one with the black holes is a sponge, Halichondria, and the little fellows, scurrying along the water’s edge here, are Sea Slaters, Ligia italica, isopods with the ability to breathe on land or under water. A sort of link between the Marine Pill Bugs and the fully terrestrial Woodlice. I think you’d better turn over. You’re turning a delicate shade of cooked prawn. Ah, this is the life! Crisis, what crisis?