Here in Greece, the first set of lockdown restrictions have been lifted. We can go for a swim at our local beach, and we don’t need passport and papers to do so. Cozzies on then, and let’s head down The 139 Steps to Livadi Beach. Now, I’ve always maintained that these steps were designed by M.C.Escher, but nature seems to have adopted the role of a particularly ascerbic art critic. Already cracked and crumbling as a result of some fierce winter storms, a recent spate of seismic activity along the Mediterranean Ridge accretionary complex has made them almost impassable. The complex has been rather quiet over the past couple of years and, working on the logic that rocks get restless when they’re not allowed to move (just like the rest of us), I took out earthquake insurance for the first time, earlier this year. Fortunately, my house is built to the requisite standards and the only damage so far has been a few cracks in the garden walls. 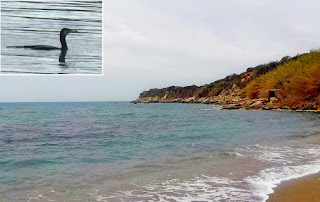 The idea is to snorkel out to those rocks over there, but an unforeseen snag has arisen; we have the beach to ourselves. Normally, I would wade out to thigh deep and just plunge in (not wishing to appear a total wuss), but with nobody about I find that I’m inching my way in like a hydrophobic grandmother. Also, the water feels as though a medium sized iceberg has just melted in the immediate vicinity. My body plays its trump card: a sudden shock to the system may cause a heart attack and there’s nobody around to help. Discretion, being the better part of valour, I wimp out. After all, I’m likely to be here for several more weeks yet. I think I’ll just photograph that cormorant instead. 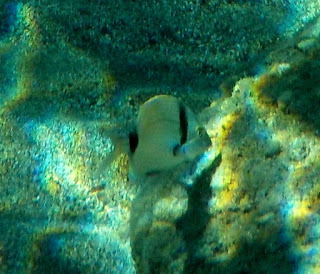 Meanwhile (in true Blue Peter fashion) here’s one I took earlier. It’s a Common Two-banded Bream, Diplodus vulgaris. This is one of several species of bream that you can see when snorkelling in this bay. Inshore, they tend to be rather small, but they can reach up to 45cm (18”) and are delicious barbecued, particularly if you stuff them with fennel and garlic and squeeze a lemon over them during cooking. The new route up the cliffs, which was built last year, does not seem to have fared much better than the steps. That flat wooden walkway is now pitched at an angle of 45 degrees. The local plant life seems to have invaded as well, but it makes a good hunting ground for this European Barn Swallow, Hirundo rustica. Incidentally, the French for Swallow is La Hirondelle, hence the swallows that you sometimes see on bottles of wine of the same name.

Plenty of insects down here for the swallow to breakfast upon. What do make of this little fellow? If you have your copy of The Quick Guide to Creepy-Crawlies to hand, check out the terrestrial larvae page. The beastie has 3 pairs of jointed legs at the front end (not easy to see from this photograph, I appreciate); no stubby, fleshy prolegs; it doesn’t have a long head and neck; and the head is not hard like a beetle’s wing case. Follow the table and you will find that it is a Neuropteran, one of the net-winged insects (as shown on page 28). In this particular case, it is a Green Lacewing larva, in the family Chrysomelidae.

I was fully vindicated in not spending time snorkelling. I just had time to get home, and get the washing in, before a horde of black clouds came gallumphing over the mountains. Within half an hour the sunshine had been replaced by thunder and hail.