Eyes of a Child

Definition of a naturalist: Someone who has never grown up, and shows no inclination to do so.


That’s me, at any rate. I still retain the inquisitiveness of a four year old. The child within is present in all of us, but sometimes the annual layers of age hide the heartwood like the successive layers of bark on a tree. So, come with me for a walk by a small stream in the foothills of the Thriptis mountains, strip away the years, and view life through the eyes of a child. 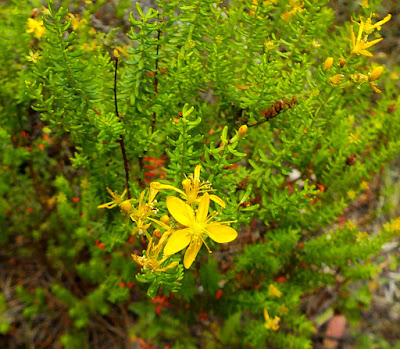 What’s that? Is the first question that a child asks on seeing something new, and identification is the first step in looking at the natural world around us. This flower, for example is a St. John’s Wort, Hypericum empetrifolium. Why is it called that? Is the next question that follows rapidly. ‘Wort’ is an old English word (pronounced wert) used for plants that can be used in cooking or medicine. St. John’s Wort, particularly the sister to this one, Hypericum perforatum, is an anti-depressant, which can be used in place of, but never together with, prescription drugs. The red stain that is released when the plant is crushed is attributed to the martyr, St. John. 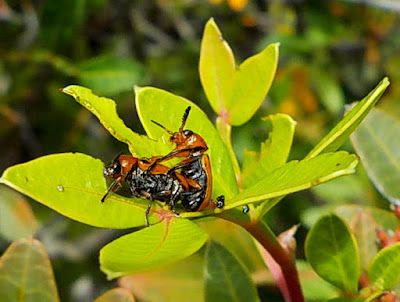 When it comes to the animal kingdom, another question often crops up. What are they doing? To dispose of the what and why regarding names, these are Leaf Beetles (Family Chrysomelidae), so called because they’re often to be found on leaves. As for what they are doing, they are mating. This is the ultimate purpose of any form of life: to propagate the species. Mating is the obvious first step in this process, but in highly successful species (like ours), it is often more useful to improve the survival chances of the existing individuals, rather than increase the absolute numbers. 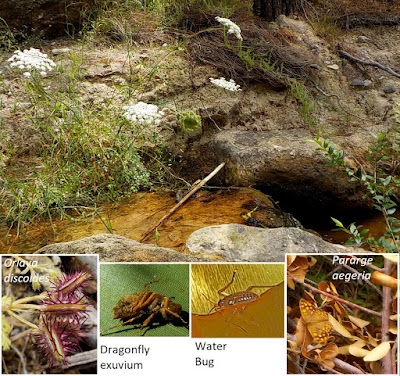 Time to take a little break from the questions and sit by the stream awhile. These breaks are important when studying nature for two reasons. Firstly, it’s amazing what you miss, when you are on the move. We probably would have missed these seed heads of a little parsley-like plant called Orlaya daucoides, and the shed skin of a dragonfly (called an exuvium). Dragonflies live their youthful lives (the larval stage) under water. When they are ready to become adults, they climb out of the water, shed their adolescent clothes (leaving them for someone else to pick up, like any teenager), then sit in the sun to dry and pump up their new wings. The second reason is that sitting still allows the wildlife to come to you, like these little Water Bugs and the Speckled Wood butterfly, Pararge aegeria, that has just landed.

Retracing our steps gives us a chance to spot things that we missed first time round. Our childish questions are not restricted to what we see, but also what we can’t see. For instance, who lives in this hole? A snake, a lizard, maybe a rat or mouse? The only thing to do is sit and wait (or set up a camera trap, as many animals are nocturnal and we may have a long wait). In this case, however, I think that a little patience may be rewarded.

There’s our answer, it’s the entrance to a bumble bee’s nest. Unlike honey bee colonies, which contain tens of thousands of individuals, bumble bee colonies usually number less than five hundred. Here’s another one coming in… and another… and another.

So, there we have it, all of life just waiting to be discovered. Everything has to feed and grow, avoid being eaten by somebody else trying to feed and grow; build a nest to raise the next generation; and find a mate with which to produce that next generation. Douglas Adams was almost right when he wrote that the answer to Life, The Universe and Everything is 42. I suspect that he meant Fortitude.

Footnote: The bird in the last picture is a Hobby, Falco subbuteo. The table football game, Subbuteo, is named after this bird’s Latin species name because the Patent Office refused it’s inventor, Peter Adolph, permission to call it Hobby.