Life on the Littoral 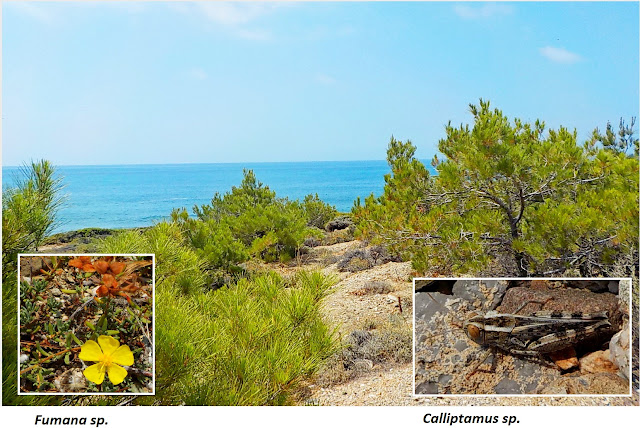 One of the major ecotourist attractions on the south east coast of Crete is Red Butterfly Gorge which we visited back in February 2014. Much less visited, but still worthy of our attention, is the narrow strip of land opposite the gorge entrance, between the road and the sea. The sea shore, the cliffs and the cliff tops constitute a habitat called the littoral zone and today we are going to look for life on the littoral.

This is one of the hottest and driest areas on the island, the ground is stony and the vegetation is sparse; hardy pines, mastic bushes and thyme predominate but, here and there, sunshine yellow Fumana flowers burst through. It is also a favourite haunt of grasshoppers, such as this Calliptamus (he of the rear end pincers for use in mating) which we met in the Uplands in October 2016.

That isolated beach down there is where we want to get to next, and there would appear to be no obvious route. We did, however, cross a tiny gully a little while back, which would seem to be a good place to start. If you want to get to the sea; follow the water course. Some very spiny and scratchy plants on the way through but, not to worry, the blood will wash off in the sea and we have loads of rock pools to explore.

OK, so we burnt our feet on the sand, the rock pools were alternately razor sharp then smooth and slippery, and we only found a few Sea Slaters. Life’s like that sometimes. Thalassotherapy time - we’ll sit and watch the waves crashing in for a bit and then try further down the coast. 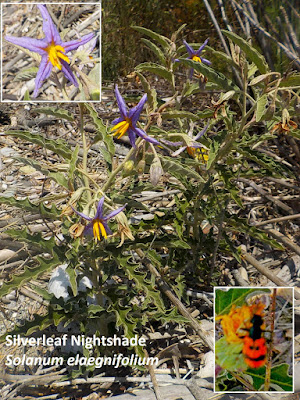 What a difference a few hundred yards makes. That, and the fact that the stream which flows through Butterfly Gorge reaches the sea at this point, means that there is a lot more going on here. We have some beautiful Silverleaf Nightshade, Solanum elaeagnifolium, and exploring the leaves, a Blister Beetle, Mylarbis kodymi. Interestingly, both the plant and the beetle can be poisonous to horses. I wonder if there’s a connection? 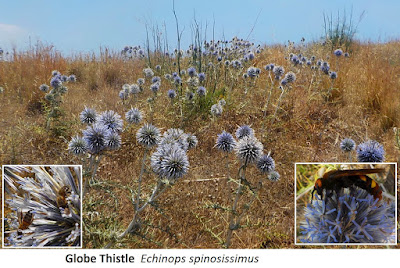 Moving on, and we have a marvellous spread of Globe Thistles, Echinops spinosissimus. These are really attracting the Hymenopterans this morning, in particular, Honey Bees, Apis melifera, and Mammoth Wasps Megascolia maculata. These are well named; worker bees are 10-15mm long, Mammoth Wasps are 4 to 6 times bigger at 60mm! I have read that they have a sting to match, but like most animals; ‘you leave them be and they’ll leave you be’, as my grandmother taught me.

Note: If you do get stung, the Hymenoptera page of The Quick Guide To Creepy-Crawlies has a medical treatment section. What do you mean, you haven’t bought a copy yet? Come along, come along, what else are you going to do with all that money you’ve saved over the last three months? 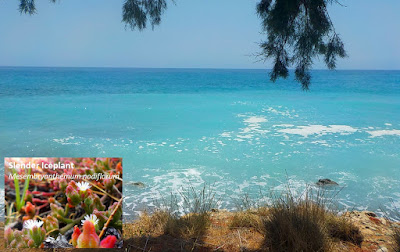 As it is now getting extremely hot, I suggest that we sit in the shade of this Tamarisk tree and explore the world at our feet. The most obvious thing is this mat of red foliage, giving the landscape a somewhat Martian appearance. It is the Slender Iceplant, Mesambryanthemum nodiflorum. Wikipedia declares this to be “native to Israel, Palestine, and Jordan, as also endemic to southern Africa.” This confuses me a bit because, to the best of my knowledge, a native plant exists naturally in the named areas (e.g. Israel, Palestine and Jordan) whereas, an endemic plant exists naturally only in the named area (e.g. southern Africa). By my logic a plant cannot be both endemic and native to different areas. Thoughts and clarification from any etymologically inclined botanists please. 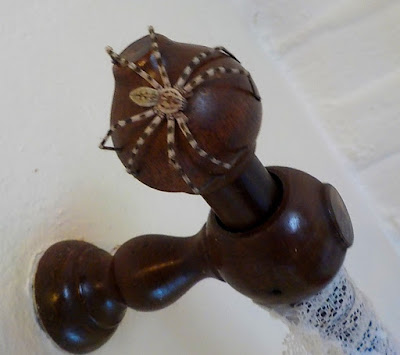 And finally… I’ve had a lot of correspondence recently from people discovering giant spiders in their houses. I too, have had one as a house guest recently. They are Huntsman spiders, Eusparassus walckenaeri. Firstly, they are totally harmless to us humans so don’t throw your slipper at them. They are useful in the house because they eat insects and are particularly partial to the odd cockroach. If you have an inherent abhorrence of spiders this is a good one to get to know. It likes to live high up on walls and on the ceiling (so you always know where it is and it is not going to surprise you by suddenly appearing from under a cushion, or running across your feet). It is also large enough to be regarded as a small pet, like a mouse. Say hello and then leave it be, it will leave you be, in return.